We define “populist” political parties as those that display high levels of anti-elitism. We do this on the basis of the Chapel Hill Expert Survey (CHES). This survey, which was carried out in January and February 2018, asked 228 regional experts to evaluate the 2017 party positions of 132 European political parties across 14 European Union member states. CHES results are regularly used by academics to classify parties with regard to their left-right ideological leanings, their key party platform positions, and their degree of populism, among other things.

We also used CHES’s “FAMILY” variable to further classify populist groups. Per CHES, “family attribution is based primarily on Derksen classification … triangulated by a) membership or affiliation with [European Parliament] party families, b) Parlgov classifications and c) self-identification.”

We can further classify these traditional and populist parties into two groups: left and right. To do so, we relied on the variable “LRGEN” in the CHES dataset, which asked experts to rate the positions of each party in terms of its overall ideological stance, with 0 meaning extreme left, 5 meaning center and 10 meaning extreme right. We define left parties as those that score below 5 and right parties as those above 5. 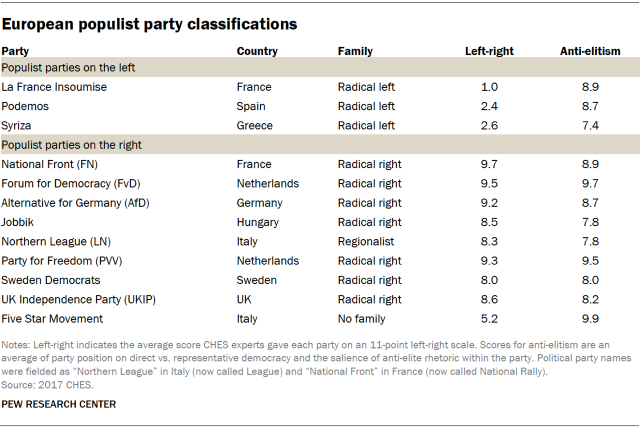 Many Across the Globe Are Dissatisfied With How Democracy Is Working 1. Dissatisfaction with performance of democracy is common in many nations 2. Publics satisfied with free speech, ability to improve living standards; many are critical of institutions, politicians 3. Why are people dissatisfied with how democracy is working? Acknowledgments Methodology Appendix A: Factors that influence democratic dissatisfaction
Appendix B: Classifying European political parties
Appendix C: Economic categorization Appendix D: Political categorization