For this report we grouped countries into two economic categories: “advanced” and “emerging and developing.” In the report, this category is referred to as “emerging.” These categories are fairly common in specialized and popular discussions and are helpful for analyzing how public attitudes vary with economic circumstances. However, no single, agreed-upon scheme exists for placing countries into these three categories. For example, even the World Bank and International Monetary Fund do not always agree on how to categorize economies.

In creating our economic classification of the 27 countries in our survey, we relied on multiple sources and criteria. Specifically, we were guided by World Bank income classifications; classifications of emerging markets by other multinational organizations, such as the International Monetary Fund; per capita gross domestic product (GDP); total size of the country’s economy, as measured by GDP; and average GDP growth rate between 2013 and 2017.

Below is a table that outlines the countries that fall into each of the two categories. The table includes for each country the World Bank income classification, the 2017 GDP per capita based on purchasing power parity (PPP) in current prices, the 2017 GDP in current U.S. dollars and the average GDP growth rate between 2013 and 2017. 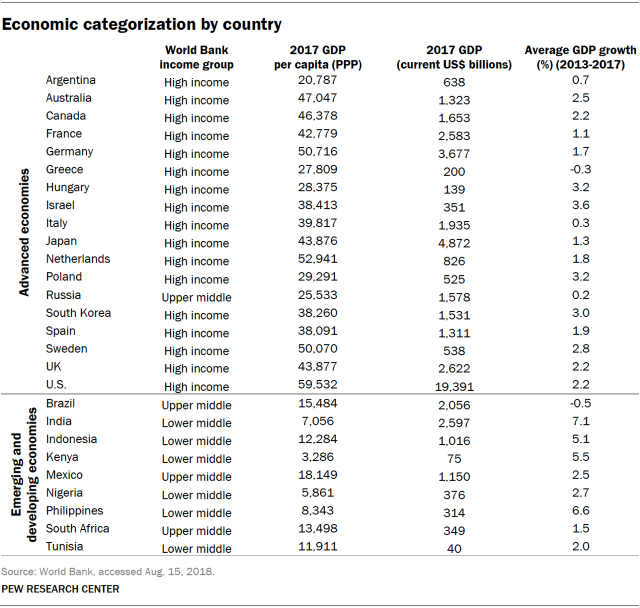 Many Across the Globe Are Dissatisfied With How Democracy Is Working 1. Dissatisfaction with performance of democracy is common in many nations 2. Publics satisfied with free speech, ability to improve living standards; many are critical of institutions, politicians 3. Why are people dissatisfied with how democracy is working? Acknowledgments Methodology Appendix A: Factors that influence democratic dissatisfaction Appendix B: Classifying European political parties
Appendix C: Economic categorization
Appendix D: Political categorization