Sub-Saharan Africans generally feel that the internet has had a positive impact on many aspects of society, including education, the economy and personal relationships. They are less certain of the internet’s impact on politics and morality.

In all six countries surveyed, majorities say that internet use has positively impacted education in their country. Nigerians are particularly optimistic about the internet’s influence: Nearly nine-in-ten (88%) say it has had a good influence on education. In four of the countries, the number of people saying the internet has positively impacted education has risen since 2014, when the question was last asked. For example, while 81% of South Africans now say internet use has had a positive effect on education, just 68% said the same back in 2014. The number of people saying increasing internet use has had a good influence on education also rose by 7 percentage points or more in Ghana, Senegal and Tanzania since 2014. 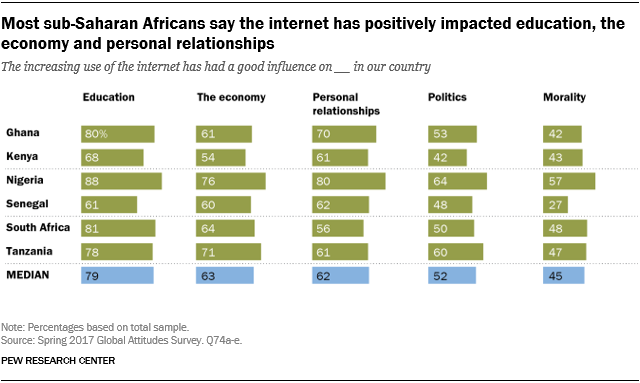 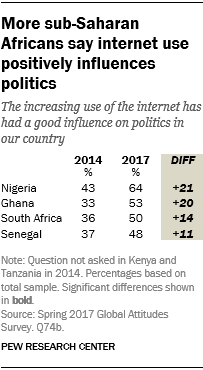 Half or more in every sub-Saharan African country surveyed also view the internet’s economic impact in a good light. Nigerians are again the most positive, with about three-quarters (76%) saying the internet has had a good influence on their nation’s economy. Kenyans are less certain: 54% say the impact has been positive, and 26% say it has been negative. In four of the six countries surveyed, the percentage of people saying the internet has provided economic benefits has risen by 8 points or more since 2014. For example, while a majority of Ghanaians (61%) now say the internet has helped their country’s economy, that number was just 43% in 2014.

In every country but Kenya, about half or more say the internet has had a good influence on their country’s politics. The percentage of people saying the internet has affected politics in a positive way ranges from 64% in Nigeria to just 42% in Kenya. But people’s opinions on how the internet impacts politics have improved since 2014, when the question was last posed in four of the countries. For example, in 2014 just 33% of Ghanaians said the increasing use of the internet positively influences politics, compared with 53% in 2017. Opinion has also improved substantially in Nigeria (up 21 points), South Africa (14 points) and Senegal (11 points).

However, Africans are more divided about how internet use has impacted morality: A median of 45% say it has had a good influence, while a 39% median say it has had a bad influence. Nigerians (57%) are most likely to say the internet has positively affected morality in their country. The Senegalese are the most downbeat about its impact; more than half (54%) view the internet as a bad influence on morality in their country. This question was last posed to four of the six countries in 2014; since then, Ghanaians’ and Nigerians’ opinions of the internet’s impact on morality have improved by 13 points and 7 points, respectively.

Older and younger people express similar views about how internet use has influenced their country. Gender, income and education are also not important factors in determining how someone feels about the impact of the internet.