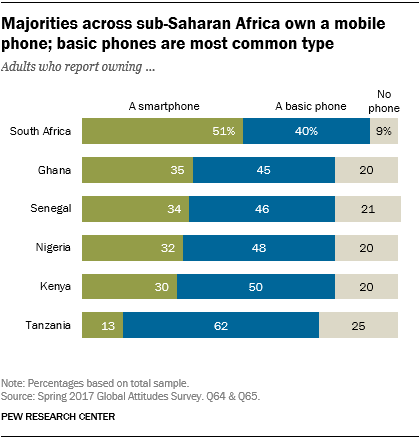 Large majorities in all six sub-Saharan countries surveyed own mobile phones. Ownership is highest in South Africa, where about nine-in-ten adults own a mobile device, and lowest in Tanzania, where three-quarters own a phone.

Basic phones – such as flip phones or feature phones – are generally the most common type of mobile device owned by sub-Saharan Africans. The exception is in South Africa, where 51% own a smartphone that can access the internet and apps, making it the most common device in that country. In Ghana, Senegal, Nigeria and Kenya, just about one-third of adults own smartphones. Smartphone ownership is again lowest in Tanzania (13%). For comparison, 77% of Americans reported owning a smartphone in January 2018. Worldwide, sub-Saharan Africa has the lowest rate of smartphone ownership of any geographic region. 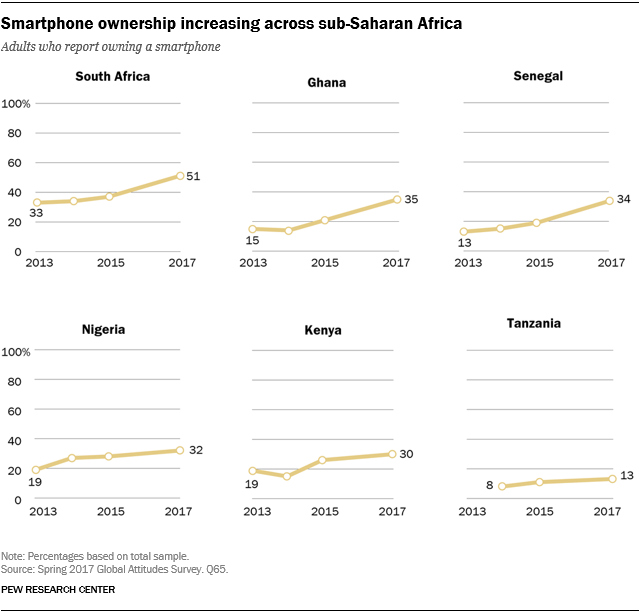 Ownership and usage gaps are particularly pronounced for smartphones 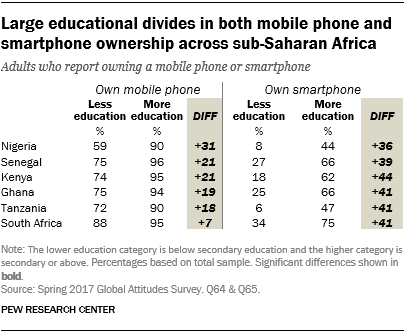 Even as mobile phones and smartphones have become more ubiquitous across much of sub-Saharan Africa, important educational, financial and generational divides in ownership remain. Gender gaps also persist in some countries. 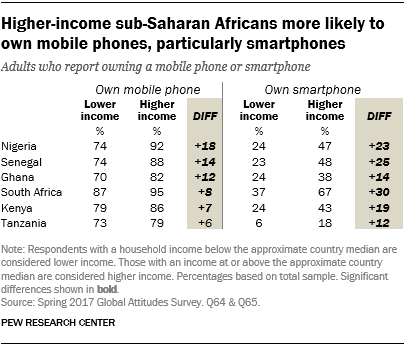 Even larger educational gaps appear for smartphone ownership in all countries. Looking again at Kenya, 62% of more-educated Kenyans own smartphones, compared with just 18% of those with less education. Similarly, wealthier people in most countries are more likely to own mobile phones of all types – but the gap is particularly large when it comes to smartphone ownership.2 People with higher incomes are much more likely than those with lower incomes to own smartphones. The gap between richer and poorer is highest in South Africa, where 67% of higher-income people own a smartphone, compared with just 37% of lower-income people. 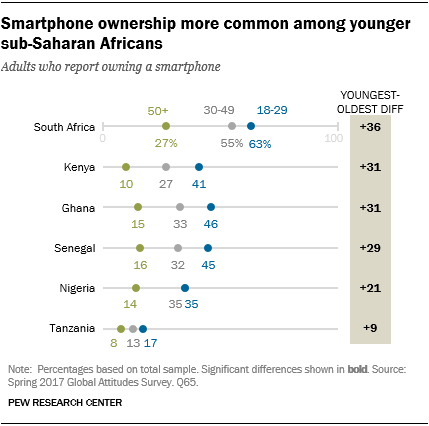 In four of the six sub-Saharan African countries surveyed – Ghana, Nigeria, Senegal and Tanzania – men are at least 11 percentage points more likely to own a mobile device. Similar gender divides in smartphone ownership exist in Ghana, Kenya, Nigeria and Tanzania, with men again being more likely to own smart devices. Among countries with significant gender differences, the gaps in smartphone ownership range from 6 points in Tanzania to 15 points in Ghana. For more on these demographic differences in mobile phone and smartphone ownership, see the detailed tables in Appendix A.

Among those with phones, social and entertainment activities are most common

Among mobile phone owners – both basic and smartphone – social and entertainment activities are much more common than other uses of mobile phones, such as looking up information. 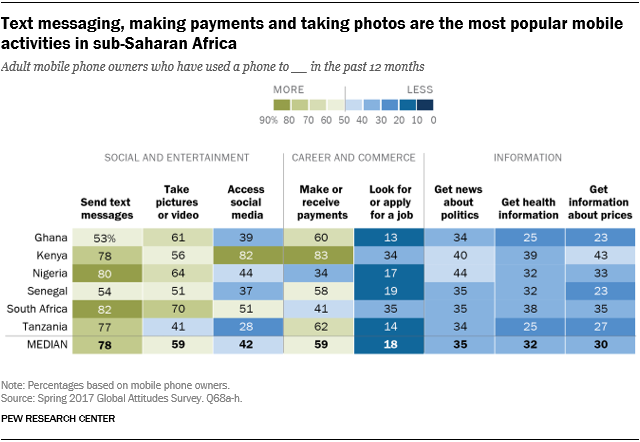 Most sub-Saharan African mobile owners are not using their phones to look up news and information. Only about one-third say they use their phone to look up information about politics (35%), health and medicine (32%) or consumer goods and prices (30%).

Men are significantly more likely than women to engage in two of these three information-seeking behaviors: getting news and information about politics and looking up consumer information. But men and women are equally likely to engage in all other activities, with some variation within countries.

Differences are much starker when it comes to socioeconomics and age. Younger, higher income and more educated mobile phone owners tend to engage more in almost all activities on their phones. 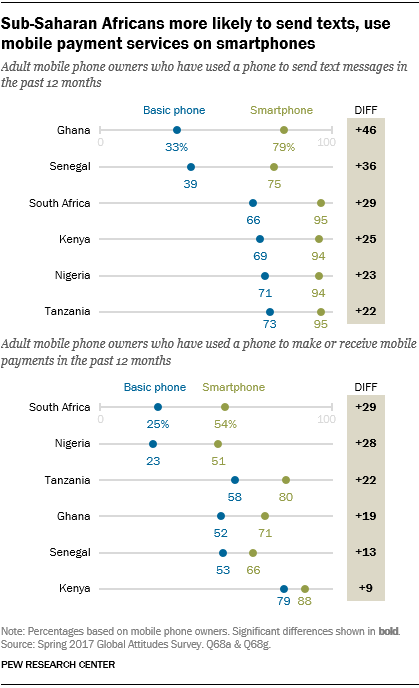 Kenya stands out as a country where even a large majority of basic phone owners (79%) report using their device to send or receive money, along with 88% of smartphone owners. These similarly high rates of mobile money-transferring could be due to the massive popularity of the M-Pesa service in Kenya. This service allows mobile users – whether on a basic phone or smartphone – to use text messages to pay for goods and services or to receive money from other users. As of 2017, M-Pesa had about 20 million registered users in Kenya, and its transactions amounted to almost half of the country’s gross domestic product.

Next: 2. Internet use is growing across much of sub-Saharan Africa, but most are still offline
← Prev Page
Page1You are reading page2Page3Page4Page5Page6Page7Page8Page9
Next Page →