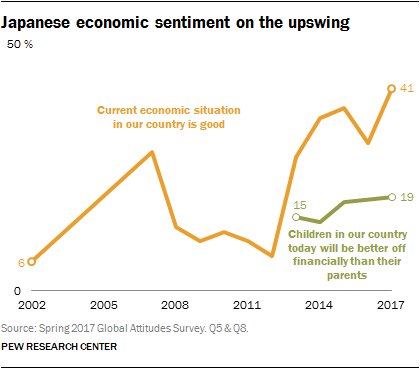 People in Japan believe their lives have improved dramatically over the past two generations. Roughly two-thirds (65%) say life in Japan today is better for people like them than it was 50 years ago. The Japanese are much more upbeat than Americans (37%) who were asked to compare their lives today to a half century ago.

Japanese also feel better about their country’s current economic situation than they did a year ago. In spring 2017, roughly four-in-ten (41%) said economic conditions were good, up from three-in-ten (30%) in 2016. While hardly a ringing endorsement of their nation’s economic health, the Japanese express a more positive view of their economy than at any time since Pew Research Center began asking this question in 2002.

The echoes of Japan’s long-struggling economy are evident among Japanese ages 30 to 49 – they are the most negative about the current economy. Roughly two-thirds (65%) of this age group say economic conditions are bad.

Although overall economic satisfaction is on the rise in Japan, concerns about the future persist.

About half of Japanese (51%) believe the condition of the global economy poses a major threat to Japan. (Concern about this issue is substantially lower than for a number of other threats such as cyberattacks.) Worries about external economic turbulence are particularly strong among the young: 65% of those ages 18 to 29 are worried, compared with 43% of those ages 50 and older. 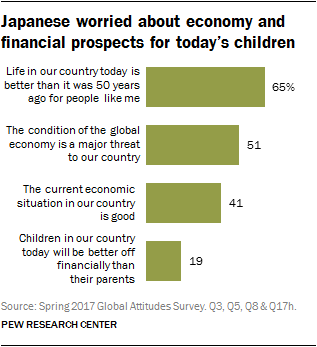 When it comes to the global economic balance of power, just 7% of Japanese believe that Japan is the world’s leading economic power. Such lack of faith in the country’s economic pre-eminence has been prevalent for years.

When asked about the economic prospects of the next generation, only 19% believe that today’s children will be better off financially than their parents, while 72% say kids will be worse off when they grow up. But there is a more hopeful note on this issue: About a third (32%) of younger Japanese believe children will be better off, while pessimism is stronger among those ages 30 to 49 and those 50 and older: Only 18% and 16% respectively in those age groups think today’s youngsters will prosper financially.

Unease over immigration and cultural diversity

Japan’s population is expected to decline by 30% over the next half century, thanks to aging and a low birthrate. One way to meet that demographic challenge is through immigration. But as of 2015, only about 2 million immigrants lived in Japan, making up about 2% of the population – far less than other aging societies, such as Germany (15%) and the U.S. (14%).

But increasing Japan’s immigrant population may face domestic reluctance. Just 24% of Japanese believe that having people of many different backgrounds – diverse ethnic groups, religions and races – makes their country a better place to live. A majority (57%) says it makes Japan a worse place to live. One sign that Japanese views may change: 44% of Japanese ages 18 to 29 say diversity makes for a better country, compared with 17% of those ages 50 and older.

Japanese Divided on Democracy’s Success at Home, but Value Voice of the People
1. Japanese more satisfied with economy, but doubts about future persist
Unease over immigration and cultural diversity
2. Mixed feelings on Japan’s democracy 3. No love lost with China 4. Troubles with the U.S. relationship? 5. Few see Russia as a threat Acknowledgments Methodology