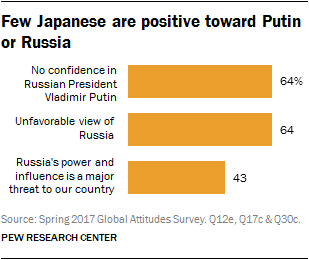 Japanese adults are far less worried about Russia than they are about China or the U.S. Only about four-in-ten (43%) think Russia poses a major threat to Japan. And nearly two-thirds (64%) voice an unfavorable view of Russia, while just 26% see Moscow favorably.

There is, however, a significant generational difference in perceptions of Russia: 53% of Japanese ages 18 to 29 hold a positive view of their northwestern neighbor, but only 16% of Japanese ages 50 and older agree.

This generation gap may be due to the young-old divide over Russia’s civil liberties record. Overall, 23% of Japanese say Russia respects the personal freedoms of its own people and 61% say it does not. But 60% of young Japanese believe Moscow respects the human rights of its people, while only 11% of older Japanese agree.

Most Japanese do not trust Russian President Vladimir Putin. Nearly two-thirds (64%) lack confidence in him to do the right thing regarding world affairs. Just 28% express confidence. But perception of Putin divides along age and gender lines. Among the young, 49% voice confidence, while only 17% of older Japanese trust his handling of international relations. And men (33%) are more confident in the Russian leader than women (24%).

Japanese Divided on Democracy’s Success at Home, but Value Voice of the People 1. Japanese more satisfied with economy, but doubts about future persist 2. Mixed feelings on Japan’s democracy 3. No love lost with China 4. Troubles with the U.S. relationship?
5. Few see Russia as a threat
Acknowledgments Methodology