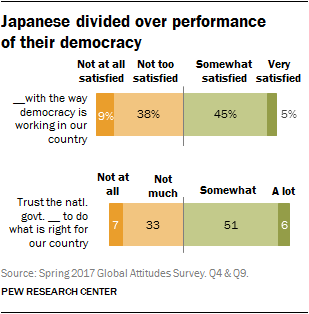 The Japanese public is split in its overall satisfaction with Japan’s democracy, while expressing slightly more trust in the national government.

Meanwhile, only half the Japanese are happy with the state of Japan’s democracy: 5% say they are very satisfied with the way democracy is working in their country, and another 45% are somewhat satisfied. Meanwhile, 47% are not satisfied. It is Japanese ages 30 to 49 (50% dissatisfied) and those ages 50 and older (48% dissatisfied) who are most uneasy. Just 32% of those ages 18 to 29 are displeased. 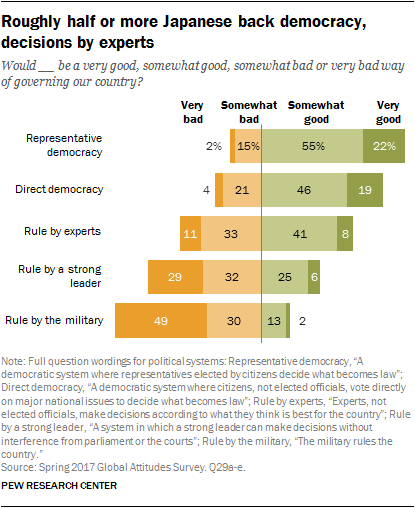 Divided in their views on the functioning of Japanese democracy, some see value in other ways of running the nation. While 77% say a good way to govern the country is a democratic system where representatives elected by citizens decide what becomes law, 65% also believe it would be good if citizens, not elected officials, vote directly on major national issues to decide what becomes law. Another 49% say it would be good if experts, not elected officials, make decisions according to what they think is best for the country.

Young Japanese (ages 18 to 29) are more satisfied than their elders (ages 50 and older) with the way Japanese democracy is working, with a 10-percentage-point generation gap. But they are more supportive of government decision-making by experts. There is an 18-point difference in views on a technocracy: 63% of 18- to 29-year-old Japanese but just 45% of those ages 50 and older favor experts, not elected officials, making decisions according to what they think is best for the country.

Next: 3. No love lost with China
← Prev Page
Page1Page2You are reading page3Page4Page5Page6Page7Page8
Next Page →

Japanese Divided on Democracy’s Success at Home, but Value Voice of the People 1. Japanese more satisfied with economy, but doubts about future persist
2. Mixed feelings on Japan’s democracy
3. No love lost with China 4. Troubles with the U.S. relationship? 5. Few see Russia as a threat Acknowledgments Methodology