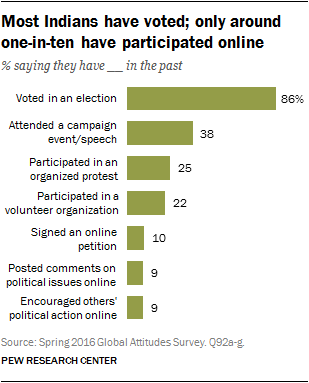 Notably, the reported likelihood of taking political action is similarly high for men and women as well as for people of all ages, with one exception. Those ages 18 to 34 (75%) are more likely than people 50 and older (66%) to take political action in response to police misconduct.

Indians positive on their government and their power to influence it 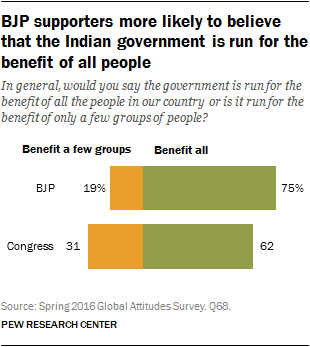 Views on citizens’ power to affect government are linked to the likelihood that people will take action when they are concerned with political issues. In India, those who think that ordinary people are able to influence the government are more likely to say they would be very or somewhat likely to take political action, such as contact elected officials or participate in demonstrations, on a variety of political issues.

Even in Era of Disillusionment, Many Around the World Say Ordinary Citizens Can Influence Government 1. Europe: Of four nations surveyed, Greeks, Italians are the most civically engaged, Hungarians are the least 2. Africa: Majorities in Kenya, Nigeria and South Africa believe that ordinary citizens can influence the government
3. India: At least seven-in-ten are likely to take action in response to political issues
Government corruption and poor‑quality schools are top issues for political action in IndiaIndians positive on their government and their power to influence it
Acknowledgments Methodology