Younger adults – ages 18 to 34 – are less likely than those 50 and older to have voted in the past. The largest age differences are in Kenya and South Africa, where more than nine-in-ten older adults have voted in the past (95% and 94%, respectively), compared with roughly six-in-ten younger adults (59% and 62%, respectively). In Nigeria, the country that held its general election most recently, a much larger percentage of younger adults report having voted (80%), but they still trail their older counterparts by 10 percentage points.

Roughly half of Kenyans have attended a political campaign event or speech. In South Africa, where the African National Congress has been in power for over two decades, only 37% say they have attended a campaign event. And in all three African countries surveyed, about four-in-ten have participated in a political, charitable or religious-based volunteer organization.

Gender plays a significant role in political participation in Nigeria. Women in Nigeria are less likely than men to have attended a campaign event or speech (28% of women vs. 59% of men), participated in a volunteer organization (30% vs. 52%) or voted in an election (80% vs. 89%).

Taking part in organized protests is less common than more traditional forms of participation, such as voting, attending a campaign event, or participating in a volunteer organization. And in South Africa, men (33%) say they are more likely than women (22%) to have taken part in a protest.

Overall, online political participation is relatively low – roughly one-in-five or fewer report having engaged in any form of online participation. In Kenya, the rate is roughly one-in-eight or fewer. In South Africa, men, young people and those with a secondary education or more are more likely to say they have posted their thoughts on political or social issues online.

Majorities across Kenya, Nigeria and South Africa say they are likely to take political action, such as contacting an elected official or participating in a demonstration, on the full range of issues tested.

Most say citizens can make a difference

Majorities in all three African countries surveyed believe that the government is run for the benefit of only a few groups of people. Yet, roughly six-in-ten or more think that ordinary citizens can do a lot to influence the government if they are willing to make the effort. 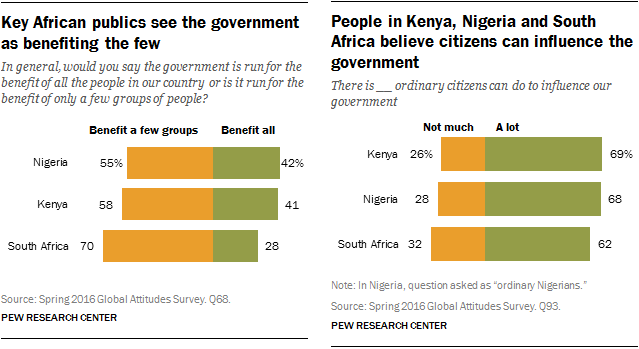 Next: 3. India: At least seven-in-ten are likely to take action in response to political issues
← Prev Page
Page1Page2You are reading page3Page4Page5Page6
Next Page →

Even in Era of Disillusionment, Many Around the World Say Ordinary Citizens Can Influence Government 1. Europe: Of four nations surveyed, Greeks, Italians are the most civically engaged, Hungarians are the least
2. Africa: Majorities in Kenya, Nigeria and South Africa believe that ordinary citizens can influence the government
Poor health care, poor-quality schools and poverty are top issues for political actionMost say citizens can make a difference
3. India: At least seven-in-ten are likely to take action in response to political issues Acknowledgments Methodology