Of the seven forms of political participation tested, voting is by far the most common type of engagement in the four European nations surveyed. Greece is one of the few European countries with compulsory voting laws for all citizens. However, these laws are largely unenforced, as evidenced by the record-low turnout during the last parliamentary election a year ago. Still, 91% of Greeks say they have voted in an electoral contest. Roughly three-quarters of Italians (77%) say they have voted in an election. And more than 25 years after the fall of communism in Poland and Hungary, overwhelming majorities say they have exercised their democratic right to vote.

Other forms of political participation are less popular, including attending campaign events, volunteering and protesting. In Greece, where anti-austerity protests began in 2010, and in Italy, a quarter or more say they have participated in an organized protest. Such action is less common in the post-communist nations of Poland and Hungary. Poles are about half as likely as Italians to say they have protested. Participation is especially low in Hungary, where roughly one-in-ten or fewer have engaged in any form of political participation beyond voting.

Online forms of political participation are still relatively uncommon. Fewer than one-in-five have posted political comments online in Italy, Greece, Poland and Hungary. Roughly similar proportions have signed an online petition about a political or social issue. With the exception of Italy (16%), about one-in-ten or fewer have encouraged others to take political action online.

In general, Greeks most likely to take political action on a variety of issues, Hungarians are least likely

Strong majorities in Greece say they are likely to take political action, such as contact an elected official or participate in a protest, on four of the six issues tested, including poverty (72%), poor health care (69%), poor-quality schools (61%) and government corruption (59%). Fewer than half in Hungary say they would take action on any of these issues. By contrast, around half or more of Italians say the same four issues are likely to motivate political action, while slightly smaller shares of Poles agreed.

Across the issues tested, young and middle-aged people are generally more likely to say they will take political action than older people in each country except Hungary. For example, 74% of Greeks under age 50 are likely to take political action over poor-quality schools, compared with roughly half (48%) of those age 50 and older. Across all six issues, young Greeks say they are more likely to contact an elected official or participate in a demonstration than older Greeks. 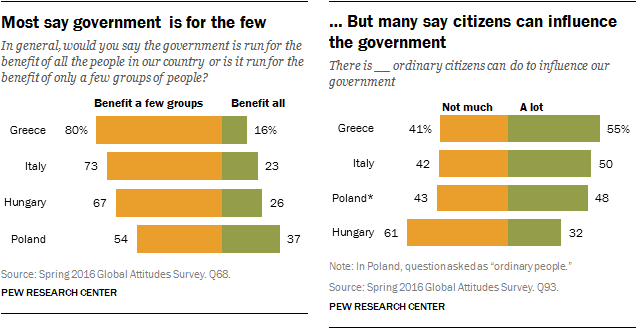 However, despite pessimism about the benefits of government being spread fairly among citizens, about half or more in Greece (55%), Italy (50%) and Poland (48%) believe ordinary citizens can do a lot to influence the government if they are willing to make the effort. Disaffection is highest in Hungary, where roughly six-in-ten (61%) believe there is not much citizens can do. 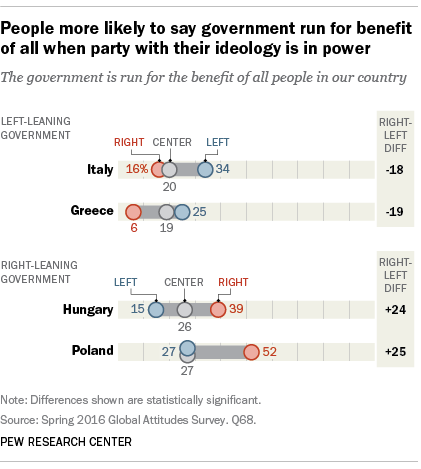 Next: 2. Africa: Majorities in Kenya, Nigeria and South Africa believe that ordinary citizens can influence the government
← Prev Page
Page1You are reading page2Page3Page4Page5Page6
Next Page →

Even in Era of Disillusionment, Many Around the World Say Ordinary Citizens Can Influence Government
1. Europe: Of four nations surveyed, Greeks, Italians are the most civically engaged, Hungarians are the least
In general, Greeks most likely to take political action on a variety of issues, Hungarians are least likelyMost say government is run for the few yet many believe citizens can still make a difference
2. Africa: Majorities in Kenya, Nigeria and South Africa believe that ordinary citizens can influence the government 3. India: At least seven-in-ten are likely to take action in response to political issues Acknowledgments Methodology