Most Chinese embrace a free market approach to economics. Seven-in-ten in this formerly socialist country feel people are better off in a free market economy, even though it may result in a gap between rich and poor. This faith in free markets cuts across demographic groups – women and men, more-and-less educated, rich and poor, young and old agree that the capitalist system is best.

Most in this rapidly changing society also say they like the pace of modern life. At the same time, however, many say that the country is losing its traditions. This sentiment is especially pronounced among the young, the well-educated, the wealthy and those residing in big cities.

Despite the emphasis on individualism often associated with capitalism and modernity, most Chinese continue to believe that success in life is determined largely by outside forces. Perhaps surprisingly, wealthier Chinese – the very people who are thriving in the new China – are especially likely to hold this view.

At this time of rapid growth and general satisfaction with the economy, along with the widespread concern about the gap between rich and poor noted above, seven-in-ten say people are generally better off in a free market economy, even though some may be rich and others poor. But only 16% of those surveyed completely agree.

Pro-capitalism sentiments are remarkably consistent across various demographic groups including gender, age, education and income. For instance, high-income (72%), middle-income (70%), and low-income (70%) respondents have essentially identical views on this question.

Views of the market do differ slightly according to where people live – residents of rural areas (79%) are especially likely to embrace free markets. On the other hand, those who live in the westernmost area covered by the survey (62%) are less likely than others to do so.

Free Market Opponents Have the Most Concerns 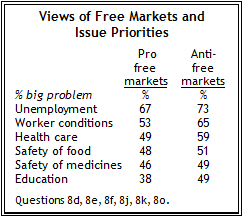 The same pattern exists for health care and education. More opponents than supporters voice concerns about health care (59% vs. 49%), and education (49% vs. 38%). By contrast, both groups hold similar views on the safety of food and medicines.

Prioritizing the Environment Even at Economic Cost

Free markets are important to the Chinese, but so, too, is the environment. Eight-in-ten Chinese agree that protecting the environment should be given priority, even if it leads to slower economic growth and some loss of jobs (17% disagree).

Just as with faith in free markets, the belief that the environment should be a priority varies little across various demographic groups including gender, age, education and income. For example, roughly equal percentages of people with a college (79%), high school (79%) or less than high school (81%) education favor protecting the environment even at the cost of economic growth. 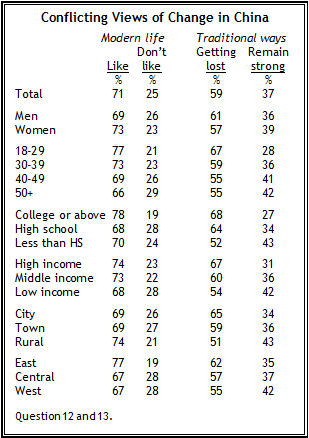 Satisfaction with the pace of modern life is greater among young people – 77% of those ages 18-29 are happy with it compared with 66% of those ages 50 years or older.

There are also differences among educational groups – nearly eight-in-ten (78%) Chinese with a college education or more are comfortable with the tempo of life, compared with roughly seven-in-ten of those with a high school education (68%) or less (70%).

People living in rural areas (74%) are slightly more likely than city-dwellers (69%) to be comfortable with the speed of 21st century life. The pace of modernity is also especially popular in eastern China (77% vs. 67% in central and western China).

Traditional Way of Life is Getting Lost

Even though most Chinese approve of modern life, many also worry about fading traditions. Most Chinese (59%) think their traditional way of life is getting lost, and this view is especially common among young, well-educated, wealthy, and urban Chinese – groups that are particularly likely to be involved in the fast paced culture of modern China.

Two-thirds of those ages 18-29 are convinced that traditional ways of life are being lost, men in this age group (72%) are especially inclined to feel this sense of loss (compared with 62% of women ages 18-29).

When it comes to income, the more money a family has, the more likely they believe time-honored daily practices are getting lost. Two-thirds of high-income earners sense a loss of traditions, compared with six-in-ten in the middle-income group and 54% of those with low incomes.

Proximity to urban areas also appears to encourage a sense of loss of customary practices; more than six-in-ten (65%) people living in a major city feel a loss of time-honored customs, while just over half do (51%) among those living in rural areas.

While a solid majority of Chinese are convinced that their traditional ways of doing things are getting lost, fewer feel this way now (59%) than in 2002 (68%).

Success Determined More By Outside Forces

When it comes to the issue of what determines success in life – outside forces or the individual – the Chinese people overwhelmingly believe it is determined by forces beyond an individual’s control. About six-in-ten Chinese (62%) agree, many completely (14%), with the notion that success in life is largely determined by outside forces. One-third disagree, while only 4% completely disagree. These figures have changed little since last year, when 65% agreed and 30% disagreed. 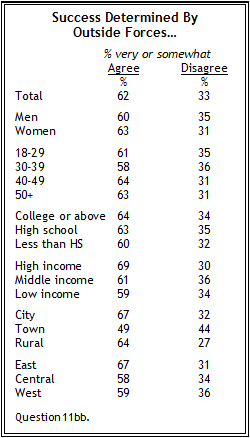 In the 2007 poll, China emerged as one of the least individualistic nations on the survey on this particular measure, ranking 40th out of 47 countries in terms of levels of disagreement with the idea that success is mostly beyond an individual’s control. The U.S. and Canada tied for the top spot – in both countries, 64% disagreed.

Interestingly, the belief that success is primarily shaped by external forces is especially common among wealthier Chinese. Nearly seven-in-ten (69%) high-income earners attribute personal success to outside forces, while fewer middle- (61%) and low-income respondents (59%) say the same.

Next: Chapter 6. Technology Use
← Prev Page
Page1Page2Page3Page4Page5You are reading page6Page7Page8Page9
Next Page →

The Chinese Celebrate Their Roaring Economy, As They Struggle With Its Costs Chapter 1. Chinese Views of Their Lives Chapter 2. National Issues Chapter 3. China and the World Chapter 4. The Olympics
Chapter 5. Modern Life and Values
Support for Free MarketsFree Market Opponents Have the Most ConcernsPrioritizing the Environment Even at Economic CostLiking the Modern LifeTraditional Way of Life is Getting LostSuccess Determined More By Outside Forces
Chapter 6. Technology Use Chapter 7. News Sources Survey Methods