Results for the survey are based on face-to-face interviews conducted March 28 to April 19, 2008. Data cited are from the Horizon Consultancy Group.

The survey in China is part of the larger 2008 Pew Global Attitudes survey conducted in 24 countries. Results for the other 23 survey countries are based on face-to-face and telephone interviews conducted under the direction of Princeton Survey Research Associates International from March 17 to April 21, 2008. (For more results from Pew’s 24-country 2008 poll, see “Global Economic Gloom – China and India Notable Exceptions,” released June 12, 2008.)

The table below provides details about the survey’s methodology, including the margin of sampling error based on all interviews conducted in China. For the results based on the full sample, one can say with 95% confidence that the error attributable to sampling and other random effects is plus or minus the margin of error. In addition to sampling error, one should bear in mind that question wording and practical difficulties in conducting surveys can introduce error or bias into the findings of opinion polls. 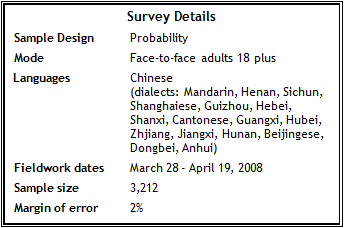 The sample, which is disproportionately representative of China’s urban areas, includes eight major cities, as well as medium-sized towns and rural areas in eight Chinese provinces. The area covered by the sample represents approximately 42% of the country’s adult population. The cities sampled were Beijing, Changsha, Chongqing, Guangzhou, Harbin, Shanghai, Wuhan and Xi’an. The towns and rural areas were sampled from the provinces of Guangxi, Guizhou, Hebei, Henan, Jiangxi, Liaoning, Shanxi and Zhejiang.

U.S.-China Favorability Topline
Trump used his clemency power sparingly despite a raft of late pardons and commutations
Biden Begins Presidency With Positive Ratings; Trump Departs With Lowest-Ever Job Mark
Almost all U.S. presidents, including Trump, have been Christians
How we know the drop in Trump’s approval rating in January reflected a real shift in public opinion
What Biden and Trump voters say they want the other candidate’s supporters to know about them