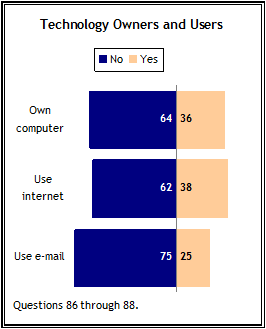 According to 2007 Pew data, China is in the middle of the global information technology owning and using pack – China ranked 20th of 47 countries on computer ownership, 25th on internet usage and 30th on email usage.

Second, as expected, computer users tend to be more educated. Those who have a college or high school education are far more likely than those with less education to own a computer and use computer technology.

Third, they tend to be wealthier. Those with a high income are more likely to own a computer and use the internet and email than those who earn less.

Fourth, tech-savvy Chinese are inclined to reside in urban environments. Chinese who live in the cities are more likely than those living in rural places to own a computer (56% vs. 8%) and use the internet (51% vs. 14%) and email (36% vs. 6%). 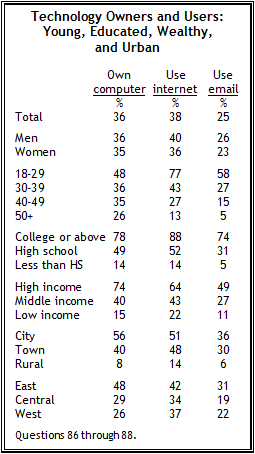 Not surprisingly, computer ownership also plays a role in technology use. Those who own a computer are much more likely to use the internet (77%) and send e-mail (54%) than those who do not own a computer (16% use Internet, 9% send email).

Overall, gender plays a very limited role in computer ownership and internet use. Men are only slightly more likely to access the internet than are women (40% vs. 36%), and are about equally likely to own a computer (36% vs. 35%) and send email (26% vs. 23%).