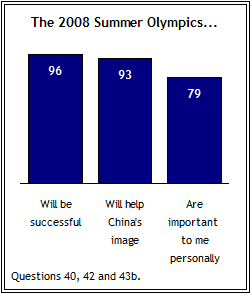 Publics around the world show signs of apprehension about China’s growing economic power, its role in foreign affairs and the safety of the products it exports, but the Chinese are confident that the 2008 Summer Olympics in Beijing will change the way their country is viewed. By nearly unanimous margins, Chinese respondents say their country will be a successful host and that the Olympic Games will help China’s image around the world. ( For more results on opinions about China and other world powers, see “Global Economic Gloom – China and India Notable Exceptions,” released June 12, 2008.)

In addition to seeing the Beijing Olympics as good for their country, an overwhelming majority of Chinese across all demographic groups say the event is important to them personally. Those who live in the host city are especially likely to say that is the case.

There is also broad optimism about the performance of China’s athletes among the Chinese public. Yet, despite the widespread excitement about the Olympics, some in China say their country is paying too much attention to the games, and the percentage who expresses that opinion has increased since Pew last asked the question in 2006.

The Olympics and China’s Image 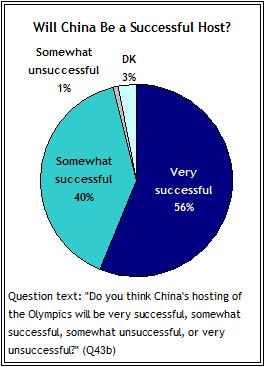 The Chinese are enthusiastic about hosting the Summer Olympics. More than nine-in-ten say their country will be successful as a host (96%), including 56% who say it will be very successful. A similar share is convinced that the games, which will take place in August in Beijing, will help China’s image around the world (93%), unchanged from two years ago.

Most See Olympics as Important 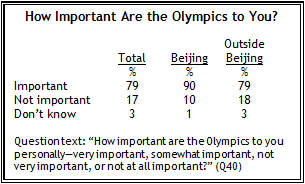 Solid majorities across all demographic groups say the Olympics impact them personally, but those in the host city are considerably more likely than those in other cities and provinces to express that view. Fully nine-in-ten in Beijing say the Olympics are important to them, compared with 79% in other parts of the country. 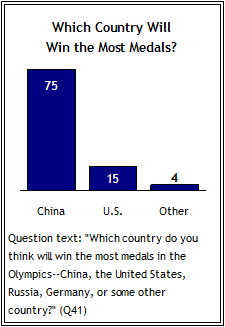 The Chinese have confidence that their country’s athletes will perform well in August. Three-quarters say China, which finished third, behind the United States and Russia, at the 2004 Summer Olympics in Athens, will win the most medals. Only 15% think the U.S. will take home the most medals.

Women are somewhat more likely than men to say China will perform better than any other country. About eight-in-ten women (78%) say their country will win the most medals, compared with 72% of men. Those with less than a high school education, and those in the middle and lower income groups, are also more optimistic about China’s chances.

Beijing residents are the least confident that Chinese athletes will outperform their opponents. Fewer than six-in-ten (58%) say China will win the most medals and more than four-in-ten (42%) think the United States will. Outside of the host city, 76% name China and 14% name the U.S. as the country that will take home the most prizes.

Attention to the Olympics 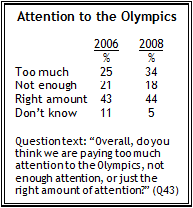 The Chinese Celebrate Their Roaring Economy, As They Struggle With Its Costs Chapter 1. Chinese Views of Their Lives Chapter 2. National Issues Chapter 3. China and the World
Chapter 4. The Olympics
The Olympics and China’s ImageMost See Olympics as ImportantOptimism about Chinese AthletesAttention to the Olympics
Chapter 5. Modern Life and Values Chapter 6. Technology Use Chapter 7. News Sources Survey Methods