Despite pervasive concerns about rising prices, real inflationary pressures have not yet affected the ability of most people to afford the daily necessities of food and energy. However, roughly half report struggling to afford health care, and many have difficulty saving for retirement and paying for education. 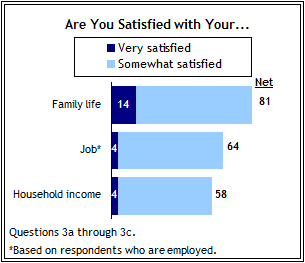 Roughly eight-in-ten Chinese (81%) are satisfied with their family lives and 14% are very satisfied. 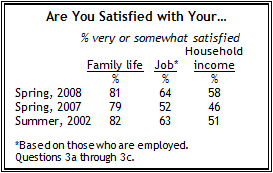 Trends in these areas of personal satisfaction vary. General happiness with one’s family life has remained basically steady over the last several years. After dropping from just over six-in-ten (63%) in 2002 to 52% in 2007, job satisfaction recovered in 2008; nearly two-thirds (64%) of Chinese currently report being satisfied with their jobs.

By contrast, Chinese satisfaction with their country’s direction and national economy has increased dramatically since 2002. While about half were satisfied with China’s direction (48%) and economy (52%) in 2002, more than eight-in-ten were in 2008 (86% country direction, 82% national economy).

Income and Education Matter in China

In China, as in many places, education and income are linked to how people view their lives. Typically, the more educated the individual, the more likely he or she is to be happy. For example, nine-in-ten (91%) among the college educated are satisfied with their family life, while 84% of those with a high school education and 77% of those with less than a high school education feel the same way. 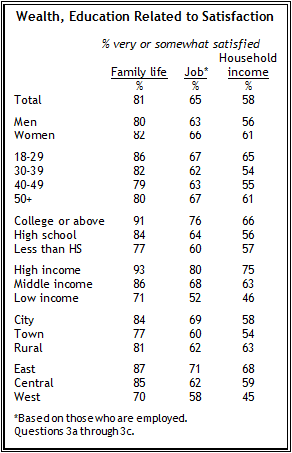 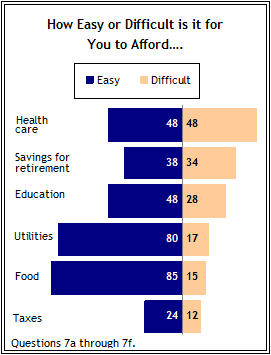 While most Chinese are satisfied with their family lives, jobs, and income, many nonetheless report struggling to afford some basic necessities. About half of those surveyed (48%) say they find it hard to afford health care and about a third (34%) say it is difficult to save for retirement. Roughly three-in-ten (28%) find paying for education difficult.

Relatively few, however, consider paying for utilities, such as water, electricity, gas and heating difficult (17%). And just 15% report difficulty affording food. Only 12% find paying taxes hard, although a solid majority (61%) say paying taxes is not applicable to them. Roughly one-quarter also report that saving for retirement (25%) and paying for education (24%) do not apply to them.

Not surprisingly, income plays a role in whether people consider these various goods and services affordable – the less money people earn, the more likely they are to feel they cannot afford various necessities.

A majority (54%) of low-income respondents find health care difficult to afford and they are also significantly more likely than wealthier Chinese to report struggling to buy food (23%) and pay their energy bills (20%). 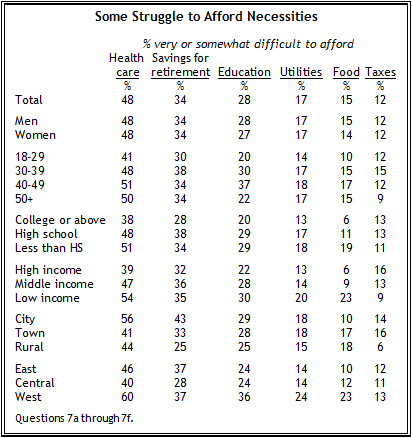 People who live in major cities are especially likely to say paying for health care (56%) and saving for retirement (43%) are hard, but they are less likely than those in towns (17%) and rural areas (18%) to consider paying for food difficult (10% among city residents). Residents of Western China are more likely than those from Eastern or Central China to have a difficult time affording health care, education, utilities and food.

Young people ages 18-29 are slightly less likely to report difficulty paying for health care (41%) and saving for retirement (30%). Educational costs are of more concern to 40-49 year-olds (37%) than to others.

Not surprisingly, parents with children under age 18 are also especially likely to cite problems paying for education – 32% say they find educational expenses difficult to afford compared with 23% of those with no children under 18.

The Chinese Celebrate Their Roaring Economy, As They Struggle With Its Costs
Chapter 1. Chinese Views of Their Lives
Satisfaction with Family Life, Job, IncomeIncome and Education Matter in ChinaAffordability of Health Care, Savings a Problem
Chapter 2. National Issues Chapter 3. China and the World Chapter 4. The Olympics Chapter 5. Modern Life and Values Chapter 6. Technology Use Chapter 7. News Sources Survey Methods