About one-in-ten people eligible to vote in this year’s U.S. presidential election are immigrants. And most (61%) of these 23 million naturalized citizens live in just five states.

Here is a closer look at immigrant eligible voters in these five states.

This post is part of a continuing exploration of immigrants in the U.S. and their eligible voter population. For this project, we analyzed the detailed demographics and geographic distribution of immigrants who are eligible to vote in the 2020 presidential election. The term “eligible voters” refers to persons ages 18 and older who are U.S. citizens. The analysis is based on data from the 2018 U.S. Census Bureau’s American Community Survey provided through Integrated Public Use Microdata Series (IPUMS) from the University of Minnesota. 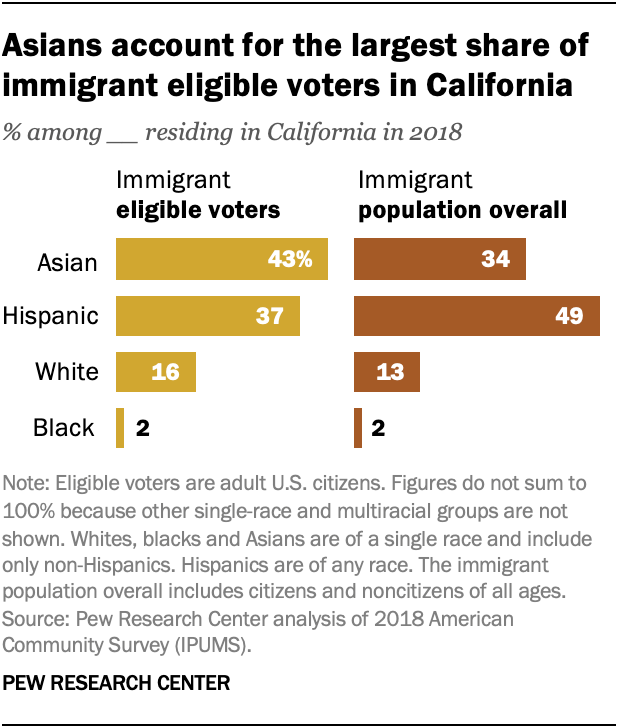 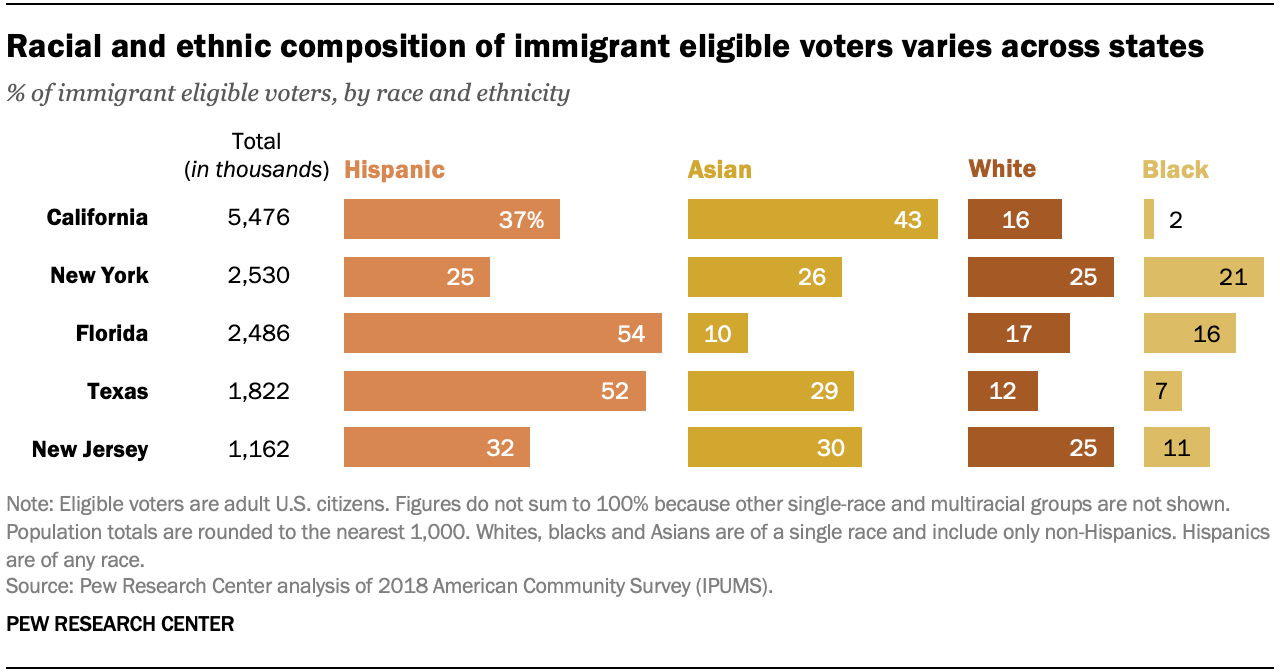 When it comes to speaking English, black immigrant eligible voters in New York are substantially more likely to be English proficient (89%) than white (66%), Asian (52%) and Latino (47%) immigrant voters.

3Latinos make up 54% of Florida’s immigrant eligible voters, far higher than the shares of white, black and Asian immigrant voters in the state (17%, 16% and 10% respectively).

Florida’s immigrant voters have varying levels of English proficiency. For example, around half (51%) of Latino immigrant eligible voters are proficient in English, a far lower share than among white (82%) or black (81%) immigrant voters.

4Texas rivals Florida in its share of Hispanic immigrant voters. Roughly half (52%) of all immigrant eligible voters in Texas are Hispanic, a share that trails only Florida (54%) among the top states. Asian immigrants are the second-largest group in Texas at 29%.

A high share of black and white immigrant voters in Texas are English proficient (88% and 85%, respectively). Lower shares of Asian (64%) and Hispanic (47%) immigrant voters are proficient. This is similar to the pattern nationally. 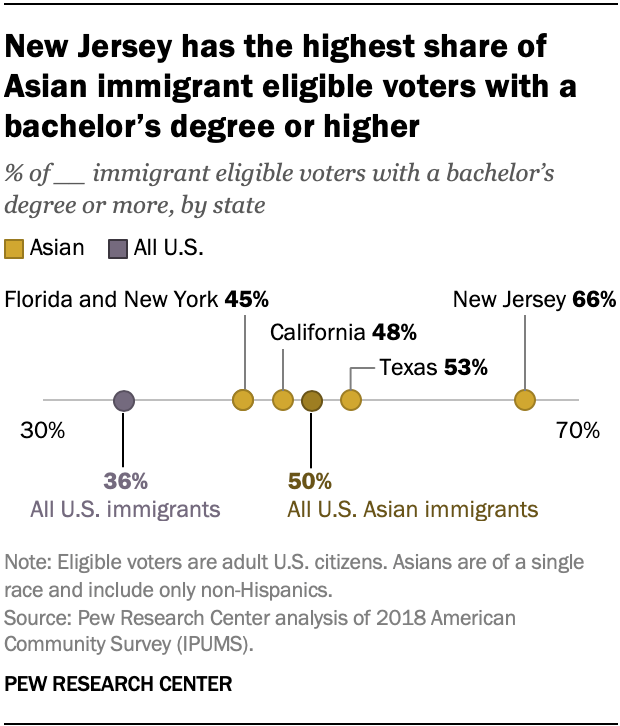 See the table below (or open it as a PDF) for detailed characteristics of immigrant eligible voters in California, New York, Florida, Texas, New Jersey and nationally. 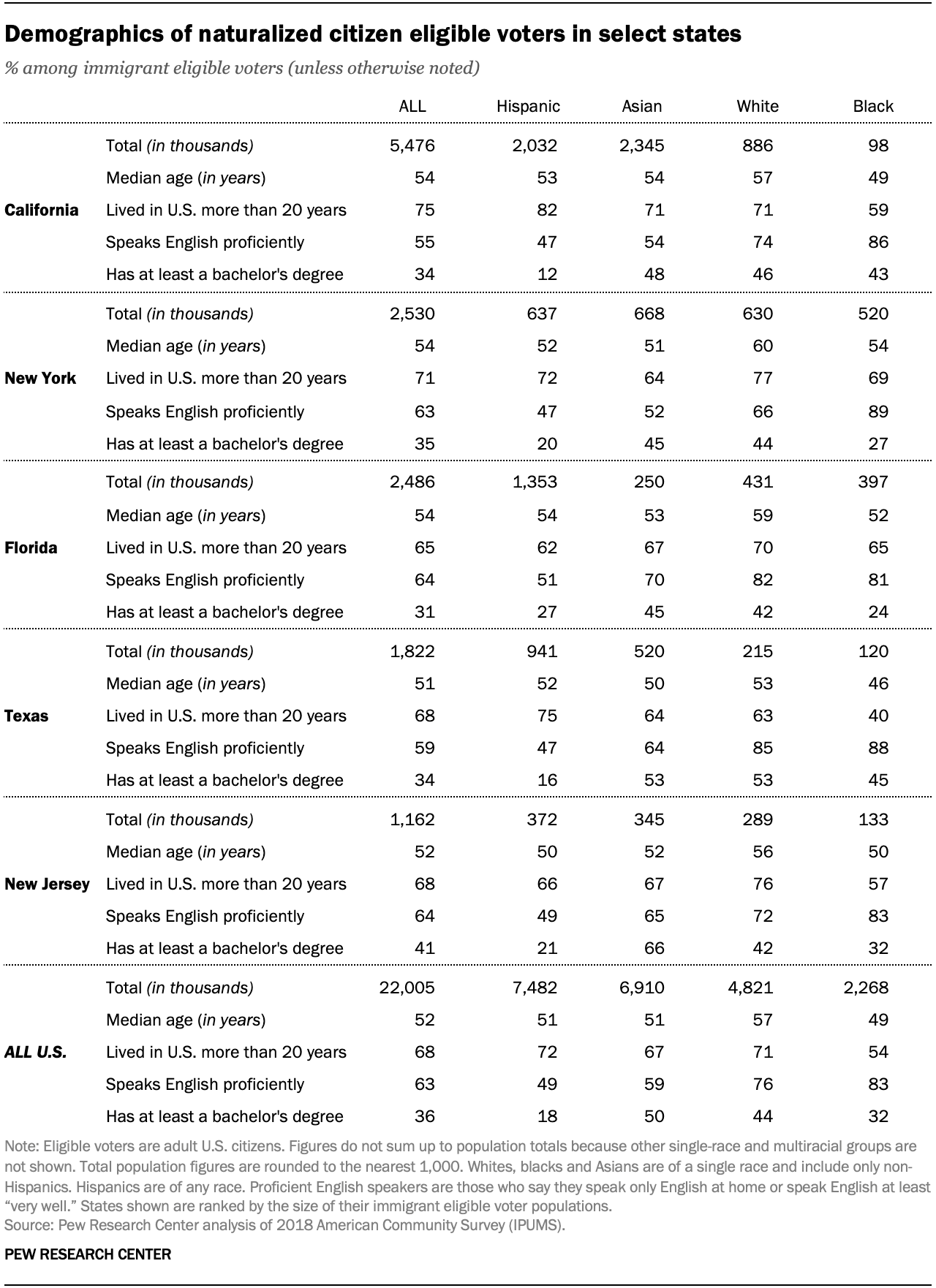