For this report, we analyzed the detailed demographics and geographic distribution of immigrants who are eligible to vote in the 2020 presidential election. The term “eligible voters” refer to persons ages 18 and older who are U.S. citizens. The analysis is based on data from the U.S. Census Bureau’s American Community Survey and the 2000 U.S. decennial census provided through Integrated Public Use Microdata Series (IPUMS) from the University of Minnesota – and the November Voting and Registration Supplement of the Current Population Survey provided through the National Bureau of Economic Research.

Eligible voters refer to persons ages 18 and older who are U.S. citizens. They make up the voting-eligible population or electorate. The terms eligible voters, voting eligible, the electorate and voters are used interchangeably in this report.

Voter turnout refers to the number of people who say they voted in a given election.

Voter turnout rate refers to the share of eligible voters who say they voted in a given election.

Naturalized citizens are lawful permanent residents who have fulfilled the length of stay and other requirements to become U.S. citizens and who have taken the oath of citizenship.

The terms Latino and Hispanic are used interchangeably in this report.

References to Asians, blacks and whites are single-race and refer to the non-Hispanic components of those populations. 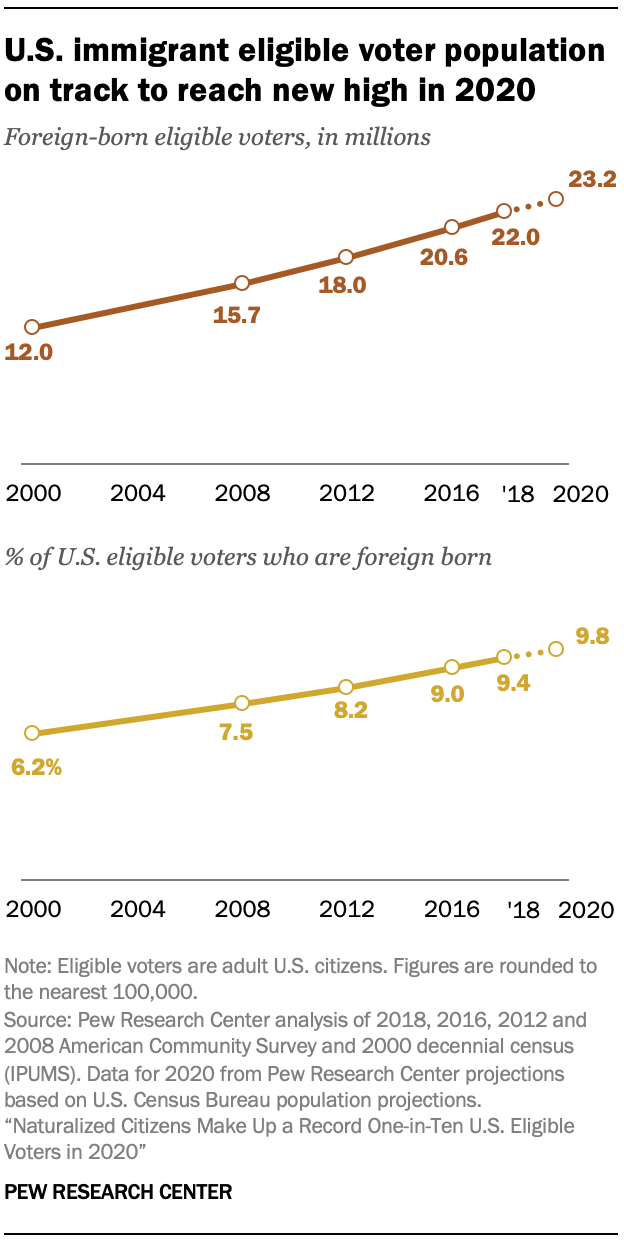 More than 23 million U.S. immigrants will be eligible to vote in the 2020 presidential election, making up roughly 10% of the nation’s overall electorate – both record highs, according to Pew Research Center estimates based on Census Bureau data.

The nation’s immigrant voters have diverse backgrounds. Most immigrant eligible voters are either Hispanic or Asian, though they hail from countries across the globe. Immigrants from Mexico make up the single largest group, at 16% of foreign-born voters. More than half of all U.S. immigrants (56%) live in the country’s four most populous states: California, New York, Texas and Florida. Two-thirds have lived in the U.S. for more than 20 years and 63% are proficient in English.

For U.S. voters overall, immigration policy issues have risen in importance recently. Immigration also has risen as a priority the public thinks Congress and the president should address. This has been especially true for U.S. Latinos under Donald Trump’s presidency. Many of the administration’s proposed policy changes, such as expanding the U.S.-Mexico border wall and limiting legal immigration, have generated strong, polarized reactions from the public. These proposals may also affect how immigrants see their place in America and the potential role they could play in the 2020 presidential election.

Most immigrant eligible voters are Hispanic or Asian 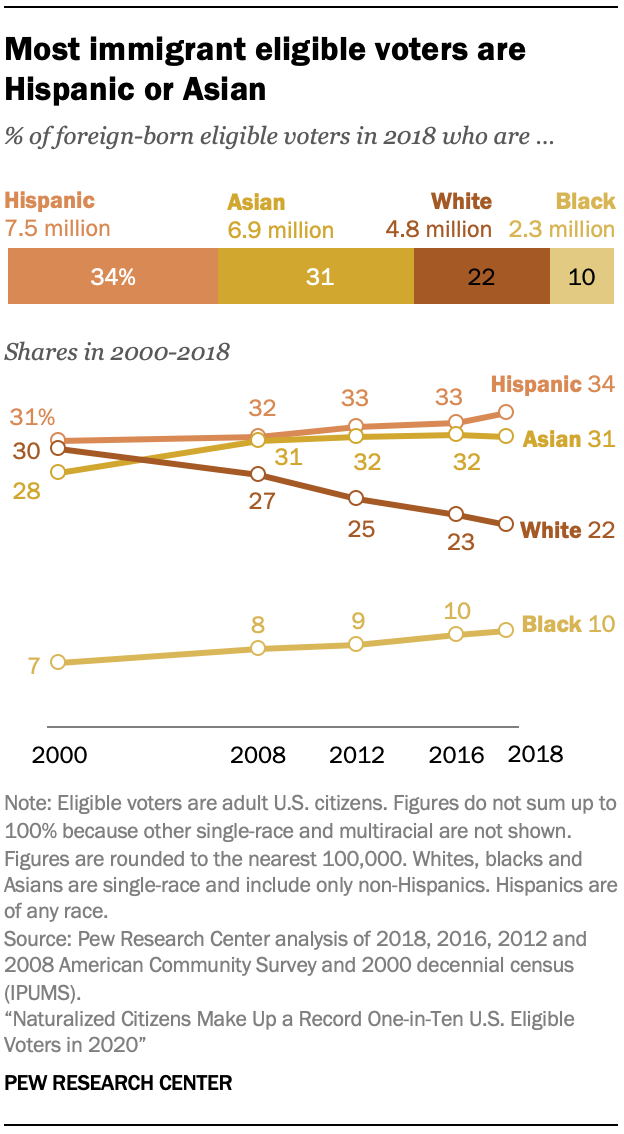 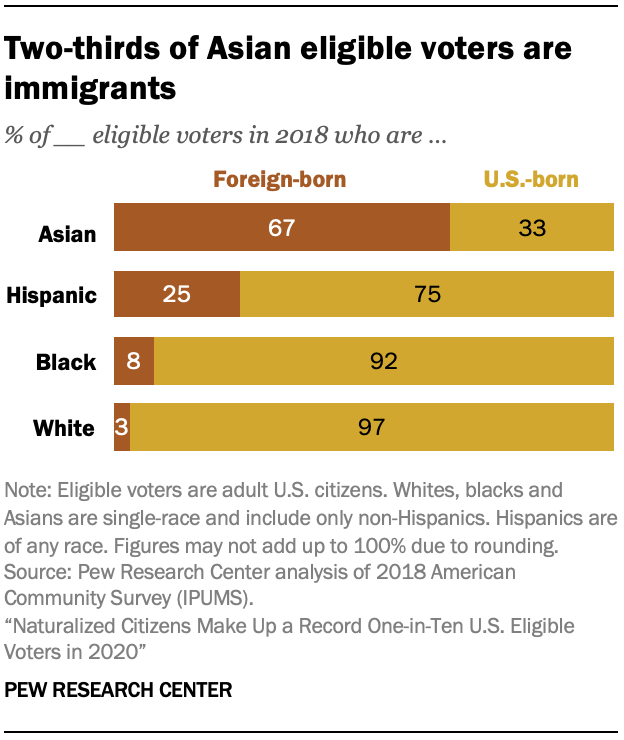 By contrast, immigrant shares among black eligible voters (8%) and white eligible voters (3%) are far lower. Immigrants are smaller in number among the adult populations of these groups, making up roughly 12% of black adults and 5% of white adults. 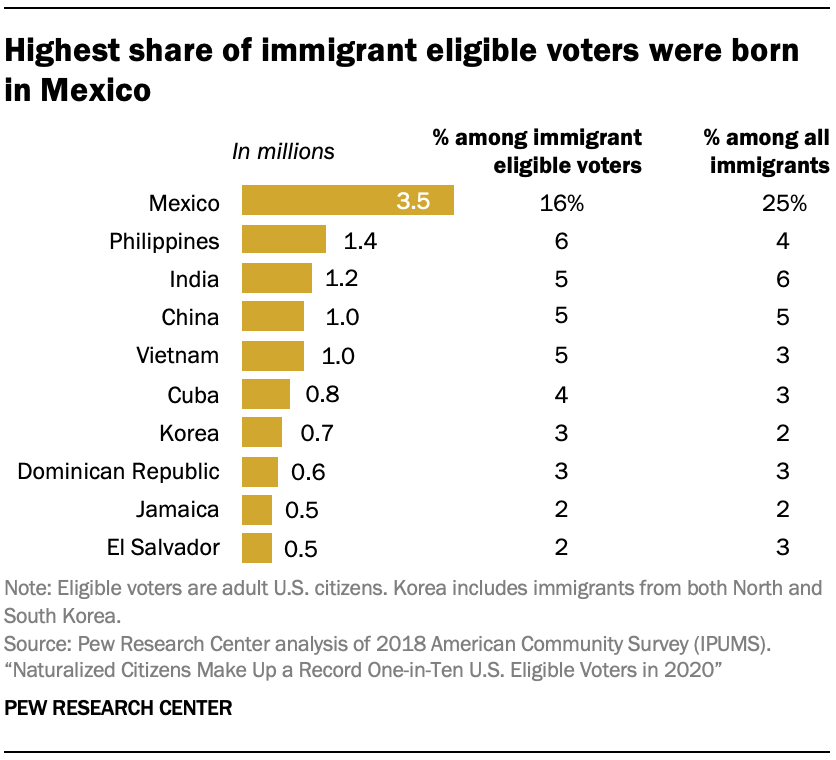 When immigrants naturalize to become U.S. citizens, they are eligible to vote in federal elections. But not all immigrants are eligible to apply for citizenship, and even if they are, there are a number of requirements and costs associated with applying that may deter some.

For most applicants, the total fee of processing a citizenship request is $725, which includes a $640 filing fee and an $85 biometric services fee for obtaining fingerprints. For a full list of benefits and responsibilities of U.S. citizenship, visit the USCIS website.

Immigrant voter turnout rates have trailed the U.S. born overall, but not among Latinos and Asians 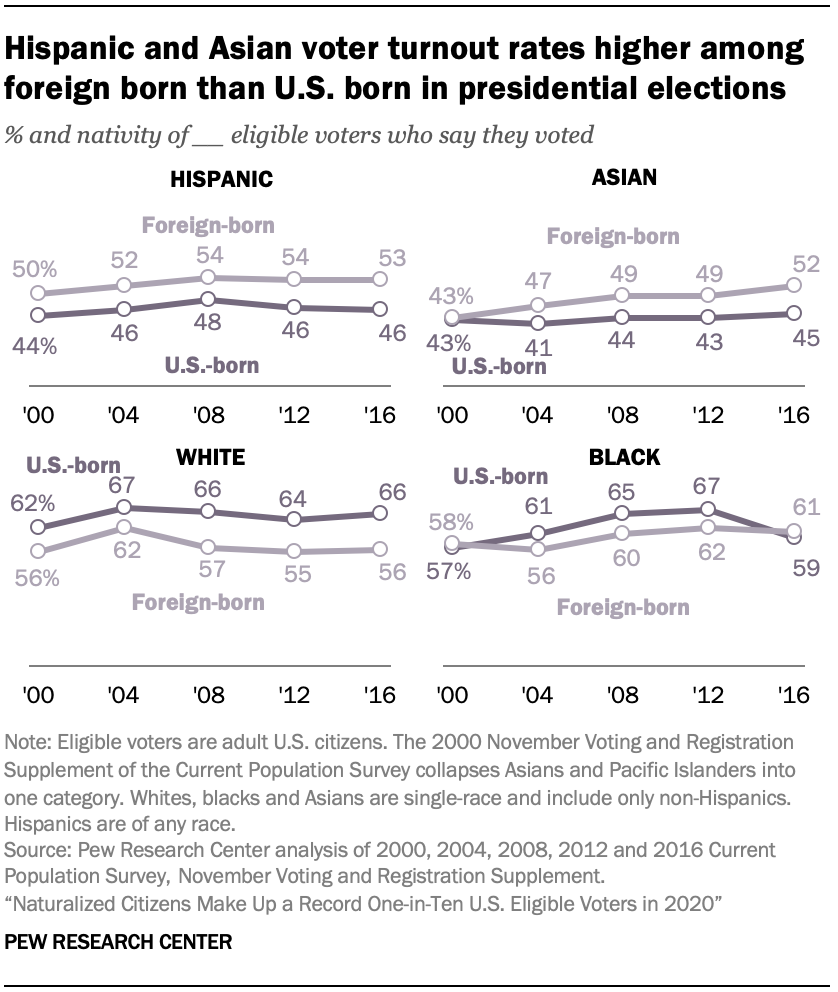 Immigrant voters and the 2020 Democratic primaries

Nearly half (46%) of the nation’s immigrant eligible voters live in states with Democratic primaries or caucuses that take place on or before March 3, Super Tuesday.3 This is up from 21% in 2016, a change driven primarily by movements in the calendar of the Democratic Party’s primaries and caucuses. 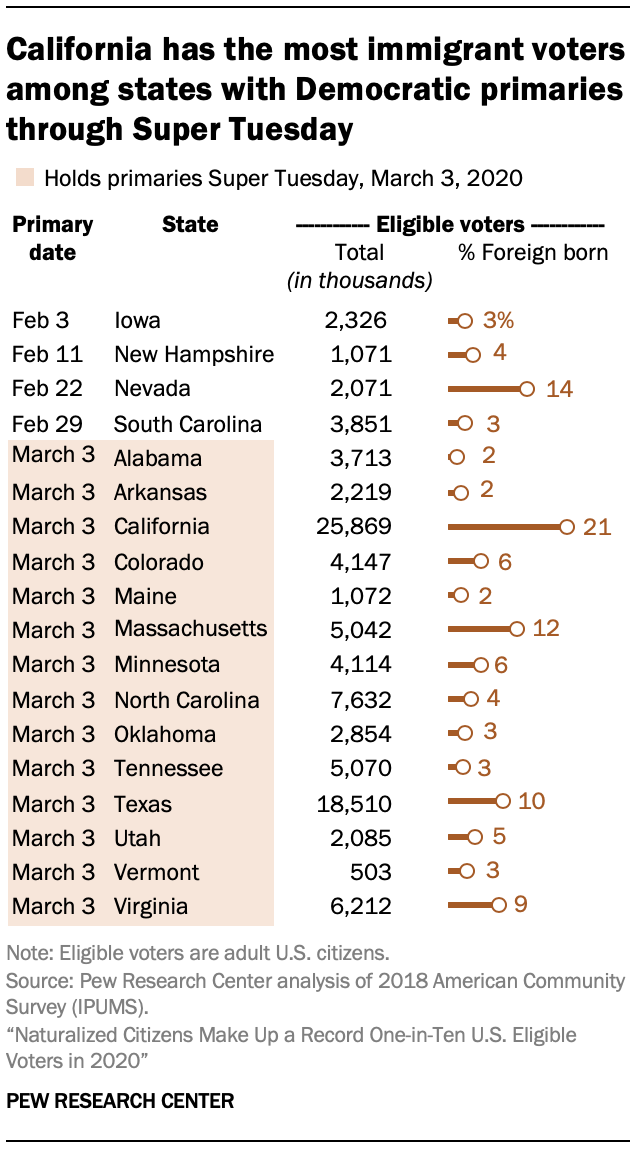 California will hold its Democratic Party primary on March 3, three months earlier than in 2016, bumping up the share of the nation’s immigrant eligible voters that live in Super Tuesday or earlier states. Out of California’s 25.9 million eligible voters, 21% (5.5 million) are foreign born, the highest share of any state through Super Tuesday and in the nation. 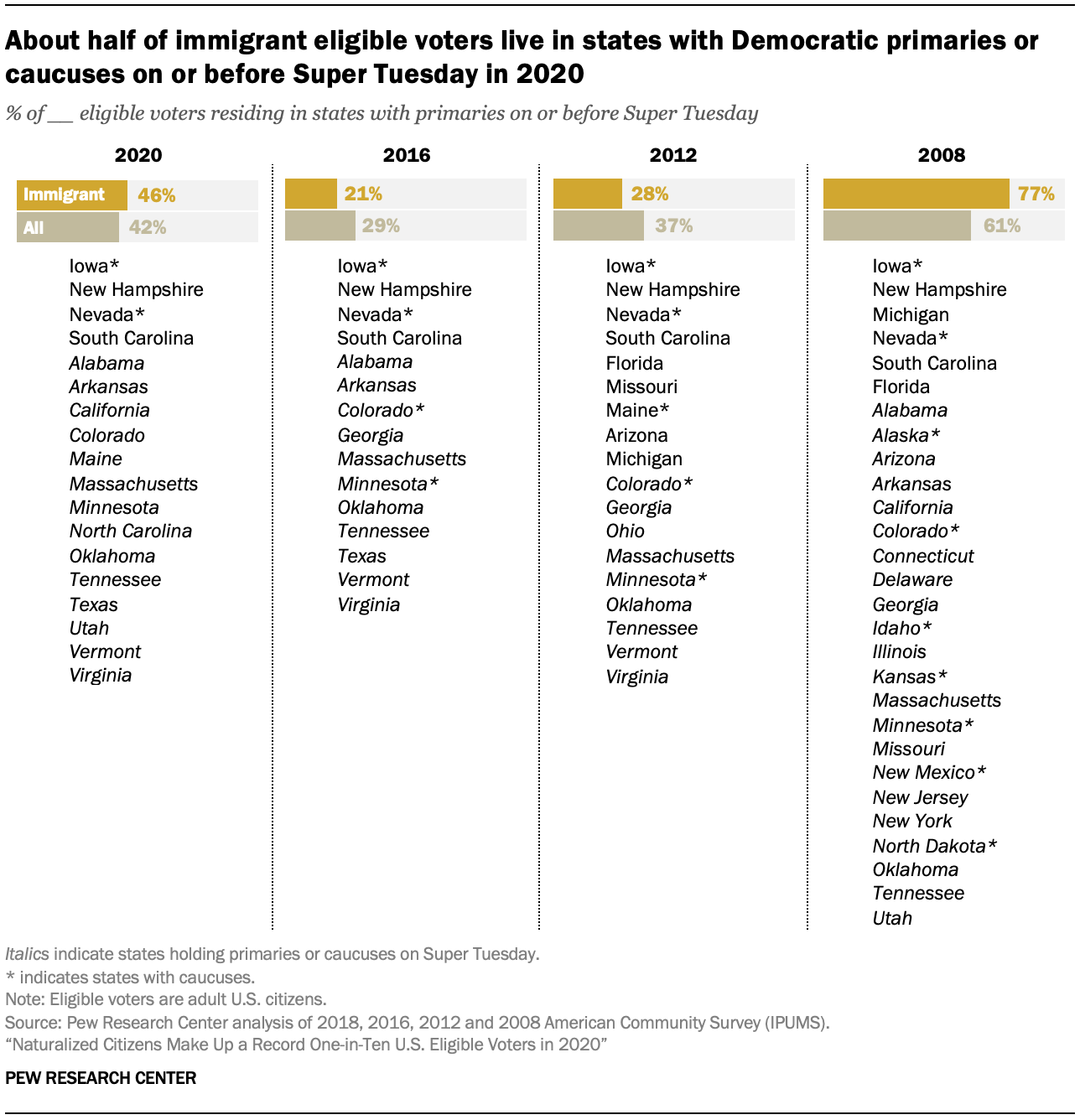 Next: 1. U.S. immigrants are rising in number, but just half are eligible to vote
← Prev Page
You are reading page1Page2Page3Page4Page5Page6
Next Page →

Naturalized Citizens Make Up Record One-in-Ten U.S. Eligible Voters in 2020
Most immigrant eligible voters are Hispanic or AsianImmigrant voters and the 2020 Democratic primaries
1. U.S. immigrants are rising in number, but just half are eligible to vote 2. The nation’s most populous states are home to most immigrant voters Acknowledgments Methodology Appendix: Immigrant eligible voters by state

Where Latinos have the most eligible voters in the 2020 election