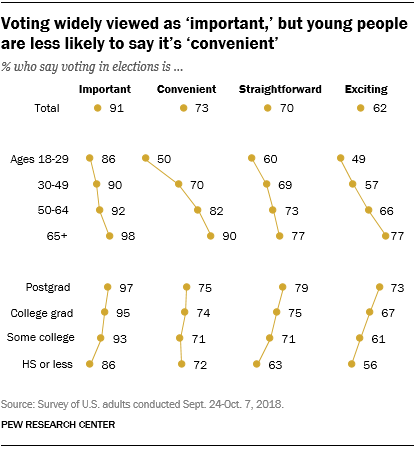 Voters are more enthusiastic about voting than in any midterm election in over 20 years of Pew Research Center polling. Still, millions of Americans will not exercise their right to vote on Tuesday.

When people are asked about their overall impressions of voting, there is a broad consensus that voting is “important.” But smaller majorities say it is “convenient,” “straightforward” or “exciting,” according to a new Pew Research Center survey on elections in America.

Why some think voting will be difficult 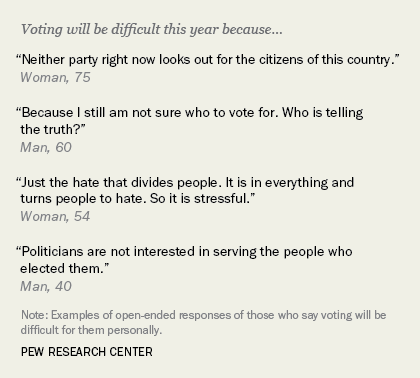 Those who plan to vote and say voting will be difficult were asked an open-ended question about why they think this will be the case. This group cites a variety of reasons for why they expect voting to be difficult; the most frequent center on the general political environment (23%) and logistical concerns (22%). 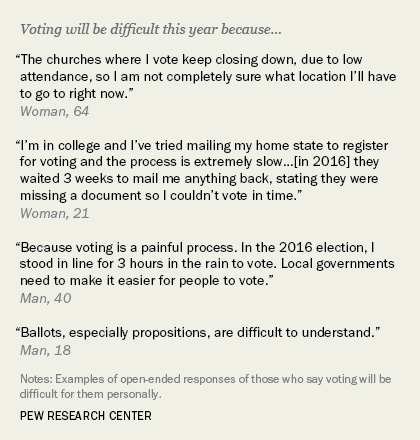 Concerns about logistical hurdles are mentioned by more than a fifth of these voters (22%). These include long wait times and large crowds at the polls (6%), not having enough time to research the candidates and ballot propositions in each race (6%), personal scheduling conflicts (4%), lack of polling places or difficulty in accessing voting stations (3%) and uncertainty about how to vote in general (3%). 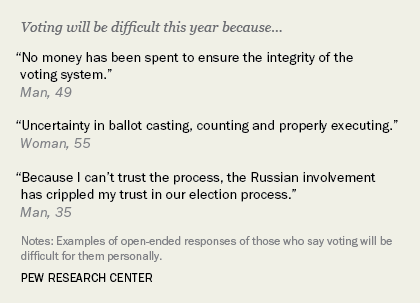 The security of the vote count is cited as a concern by 9% of those who plan to vote but say it will be difficult – 6% are concerned about the accuracy of vote tabulation by polling officials or corruption in the counting of ballots, and 3% are worried about foreign interference in the process by Russia or other outside actors.

About the same number of voters for whom it will be difficult (8%) say that participating in elections doesn’t matter all that much. Among these voters, 4% express a lack of trust in the candidates, or say their views were not effectively represented by either party’s viewpoints. Another 4% say that their vote would not change things much either way.

Note: The methodology and topline can be found here.

A look at voters’ views ahead of the 2018 midterms
Americans’ expectations about voting in 2020 presidential election are colored by partisan differences
Older people account for large shares of poll workers and voters in U.S. general elections
Younger generations make up a majority of the electorate, but may not be a majority of voters this November
Hispanic voters more engaged in 2018 than in previous midterms