The American Trends Panel (ATP), created by Pew Research Center, is a nationally representative panel of randomly selected U.S. adults. Panelists participate via self-administered web surveys. Panelists who do not have internet access at home are provided with a tablet and wireless internet connection. The panel is being managed by GfK.

Data in this report are drawn from the panel wave conducted September 24-October 7, 2018. A total of 10,683 panelists responded out of 13,493 who were sampled, for a response rate of 79%. The cumulative response rate accounting for nonresponse to the recruitment surveys and attrition is 3.8%. The margin of sampling error for the full sample of 10,683 respondents is plus or minus 1.5 percentage points. 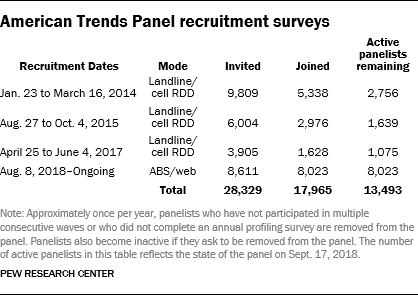 Of the 17,965 individuals who have ever joined the ATP, 13,493 remain active panelists and continue to receive survey invitations. 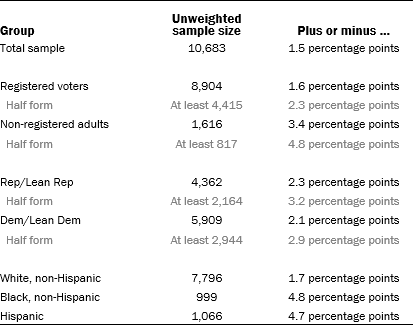 Next: Appendix A: Categorization of states in this report
← Prev Page
Page1Page2Page3Page4Page5Page6Page7Page8You are reading page9Page10
Next Page →