Americans are generally concerned over the potential for eligible voters being denied the opportunity to vote and those ineligible to vote being able to cast ballots. 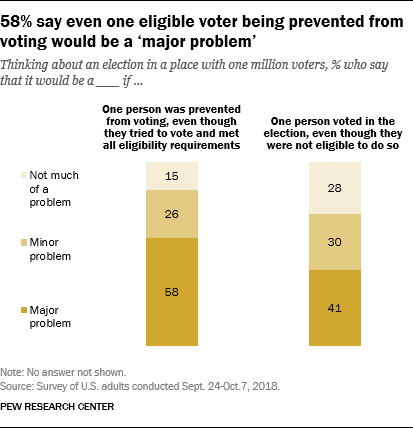 Among those presented a different scenario in which one ineligible voter voted in an election with one million voters, 41% say they view this as a major problem, while another 30% say it would be a minor problem. Nearly three-in-ten (28%) say this would not be much of problem, nearly double the share saying this about an eligible voter being denied the opportunity to vote.

When asked about cases in which the number of eligible people prevented from voting is higher, larger shares say this would be a major problem with the election. Similarly, as the share of ineligible voters casting ballots in the scenario increases, Americans are more likely to view this as a major problem. The survey asked these questions in a variety of different ways, with each respondent receiving one version of the question (see sidebar for details of this survey experiment). 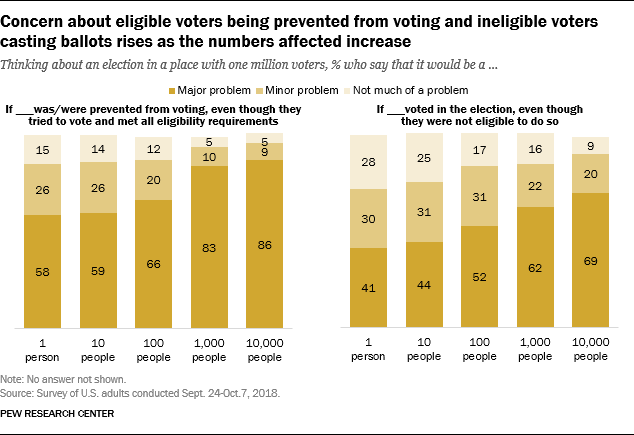 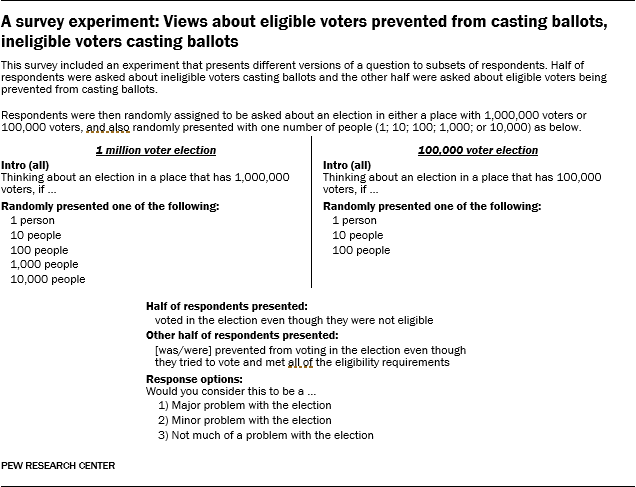 Wide partisan divide in concerns over voting by ineligible voters

Overall, Democrats and Democratic leaners are more likely than Republicans and Republican leaners to say it would be a major problem if an eligible voter was prevented from voting even if they tried to vote and met eligibility requirements. In the case of a single voter of one million being prevented from casting a ballot, 63% of Democrats and 52% of Republicans say they would consider this to be a major problem.

As the number of people affected in the scenario rises, the shares viewing this as a major problem rise in both parties. But the partisan gap remains about 10 percentage points: For example, while 81% of Republicans say it would be a major problem if 10,000 eligible voters out of a million were prevented from casting a ballot, an even higher share of Democrats (91%) say this. 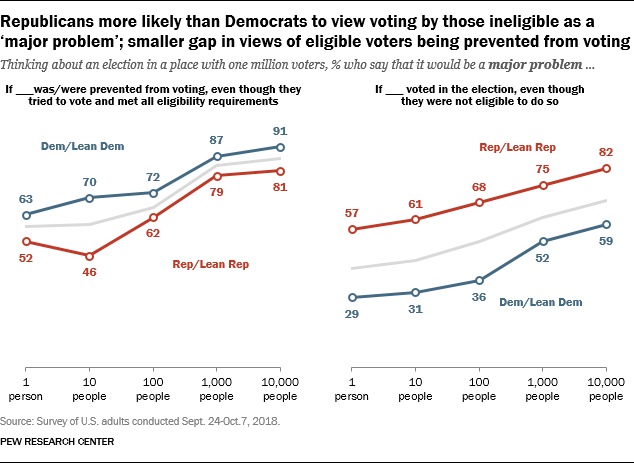 And while the share considering this to be a major problem rises as the number of individuals in the scenario rises in both parties, the partisan gap also remains. While 59% of Democrats say it would be a major problem if 10,000 ineligible voters cast ballots in a place with one million voters, 82% of Republicans say this.

In views about ineligible voters casting ballots, the total number appears to matter more than the proportion of the electorate 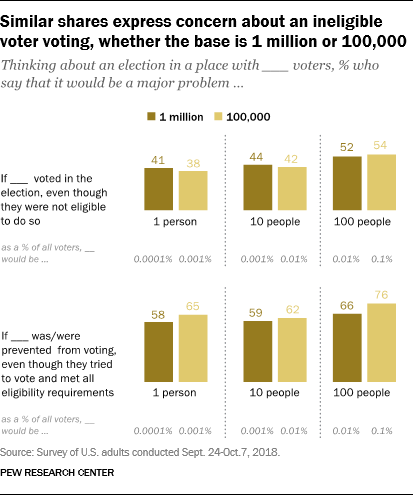 A random subset of survey respondents was asked about an election in a place with 100,000 voters rather than one million.

The effect of varying the size of the electorate is not clear for the question asked about eligible voters prevented from voting.

Elections in America: Concerns Over Security, Divisions Over Expanding Access to Voting 1. Confidence in accurate vote counts, election administration 2. Election security 3. The public’s voting values 4. Views of election policy proposals 5. Views of state election rules 6. Impressions of voting in elections
7. Concerns about eligible voters being prevented from voting and ineligible voters voting
Wide partisan divide in concerns over voting by ineligible votersIn views about ineligible voters casting ballots, the total number appears to matter more than the proportion of the electorate
Methodology Appendix A: Categorization of states in this report