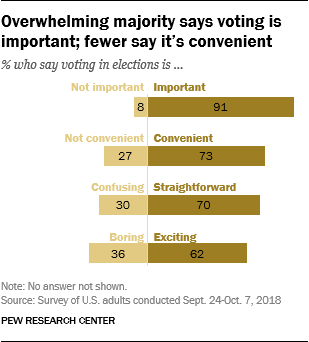 Voting is widely viewed by the public as important: 91% say this, while just 8% say it is not. Although most also view it as convenient (73%), straightforward (70%) and exciting (62%), these evaluations are less universally held, and there are sizeable partisan, age and educational differences in these views. 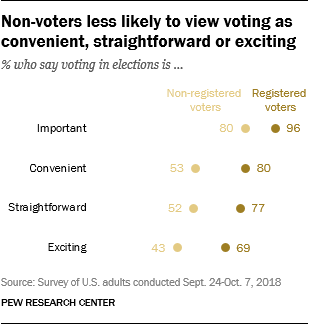 On balance, those who are not registered are more likely to view voting as boring (56%) than exciting (43%). Among registered voters, about seven-in-ten (69%) say that voting in elections is exciting, compared with just 29% who say that it is boring.

There are no significant partisan differences in views of voting’s importance (93% of Republicans and Republican leaners and 92% of Democrats and Democratic leaners say it is important) or in the shares saying voting is exciting – just over six-in-ten in both partisan groups say that it is.

But Democrats and Democratic leaners are less likely than those who affiliate with or lean to the GOP to say voting is convenient (68% vs. 79%) or that it is straightforward (67% vs. 75%).

In both partisan groups, those who affiliate with a party are more likely than those who lean toward a party to describe voting in elections with any of these four positive terms. For instance, 84% of Republicans say voting is convenient, compared with 71% of Republican leaners; the gap between Democrats and Democratic leaners is similar (76% vs. 57%). 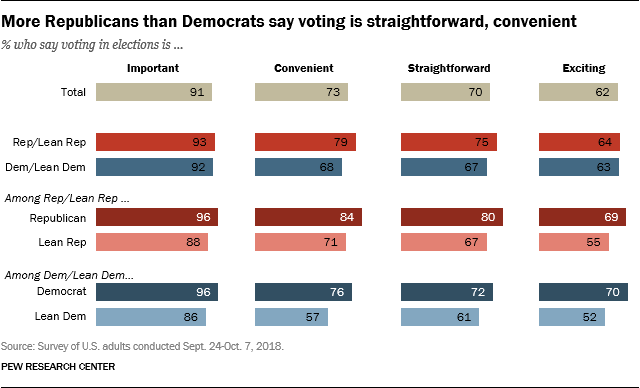 Impressions of voting also vary across age and educational groups.

Younger adults are much less likely than older people to view voting as convenient: While 90% of those 65 and older say voting in elections is convenient, just half of 18- to 29-year-olds say this. 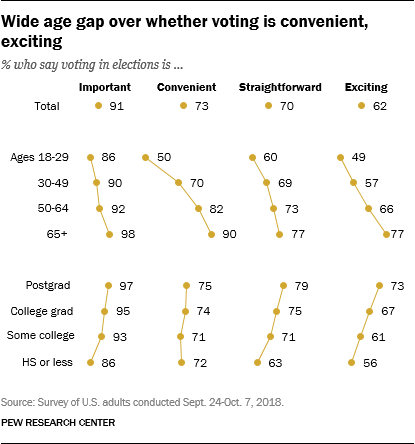 Similarly, voting is viewed as exciting by 77% of those 65 and older, compared with just 49% of those 18 to 29. Though age differences are less pronounced over whether voting is straightforward or confusing and whether it is important or not important, there also are age gaps in these views.

Most say voting will be easy for them personally 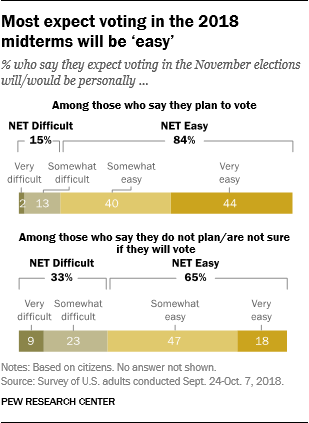 Among those who say they plan to vote in the November election, 84% expect that voting will be personally easy for them, including 44% who say it will be very easy; 15% say that it will be at least somewhat difficult.

Voting is also viewed as personally easy by about two-thirds (65%) of those who are eligible to vote but say they do not plan to do so or are not sure if they will vote. However, a third of those in this group say voting would be difficult.

While most of those who plan to vote expect voting will be easy, younger people, non-whites, and those without a college degree are less likely than others to say this.

And while about three-quarters or more of voters across all age groups expect voting in this election will be easy, the share saying voting will be very easy increases substantially with age – just 33% of those younger than 30 who plan to vote say this, compared with a majority (55%) of those 65 and older.

Voters without a college degree are slightly less likely than those with a bachelor’s degree or more education to expect voting will be easy (87% vs. 83%).

Republicans also are somewhat more likely than Democrats to say they expect voting to be very easy; 89% of Republicans say it will be at least somewhat easy, compared with 81% of Democrats who say this, and there is a 12-point difference in the shares saying it will be very easy for them to vote this fall (51% vs. 39%). 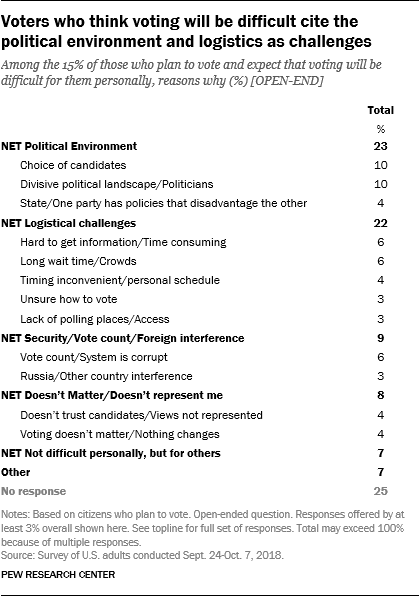 When the small share of voters (15%) who say they expect voting to be difficult this year are asked in an open-ended format why they say this, 23% mention elements of the political environment, including the choice of candidates (10%) or the divisive political climate (10%).

Roughly two-in-ten (22%) mention logistical concerns, ranging from inconvenient timing, to wait times at the polls and uncertainty of how or where to vote or get information.

About one-in-ten (9%) cite concerns about security or interference from foreign actors; 8% say it will be difficult to vote because they are not represented or because they think voting doesn’t matter.

Next: 7. Concerns about eligible voters being prevented from voting and ineligible voters voting
← Prev Page
Page1Page2Page3Page4Page5Page6You are reading page7Page8Page9Page10
Next Page →

Elections in America: Concerns Over Security, Divisions Over Expanding Access to Voting 1. Confidence in accurate vote counts, election administration 2. Election security 3. The public’s voting values 4. Views of election policy proposals 5. Views of state election rules
6. Impressions of voting in elections
Most say voting will be easy for them personallyThose who expect voting to be difficult cite a variety of reasons
7. Concerns about eligible voters being prevented from voting and ineligible voters voting Methodology Appendix A: Categorization of states in this report