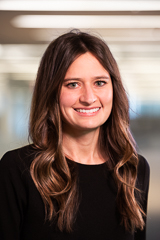 Hannah Hartig is a research associate at Pew Research Center, where she primarily studies U.S. political attitudes and voting behavior. She has authored analyses on topics including domestic opinions of the U.S., voter turnout in 2020 and views of abortion. Prior to joining the Center, she was director of research at the Penn Program on Opinion Research and Election Studies at the University of Pennsylvania. She regularly discusses the Center’s political research with the news media and has served as an election night exit poll analyst for NBC News since 2014. Hartig received her bachelor’s in foreign affairs from the University of Virginia and master’s degree in quantitative politics from the University of Pennsylvania.

While 64% of Republicans say GOP congressional leaders should “stand up” to Biden on matters important to their party’s voters, Democrats are more likely to say they would support efforts by leaders to find common ground.

Wide partisan gaps in abortion attitudes, but opinions in both parties are complicated

Public attitudes about the legality of abortion are largely divided along partisan lines – and to a greater extent than in past decades.

← Prev Page
You are reading page1Page2Page3Page4Page5Page6Page7
Next Page →