The phrase “spiritual but not religious” has become widely used in recent years by some Americans who are trying to describe their religious identity. While Pew Research Center does not categorize survey respondents in such a way, our surveys do find that the U.S. public overall appears to be growing a bit less religious – but also somewhat more spiritual.

Americans have become less religious in recent years by standard measures such as how important they say religion is to them and their frequency of religious service attendance and prayer. But, at the same time, the share of people across a wide variety of religious identities who say they often feel a deep sense of spiritual peace and well-being as well as a deep sense of wonder about the universe has risen.

The drop in religiosity in the U.S. has been limited to religious “nones” (that is, those who describe themselves as atheists or agnostics and those who say they have no particular religion). The growth of the unaffiliated population and their decreasing religiosity have been the main factors behind the emergence of a less religious public overall. But, interestingly, the rise in spirituality has been happening among both highly religious people and the religiously unaffiliated. 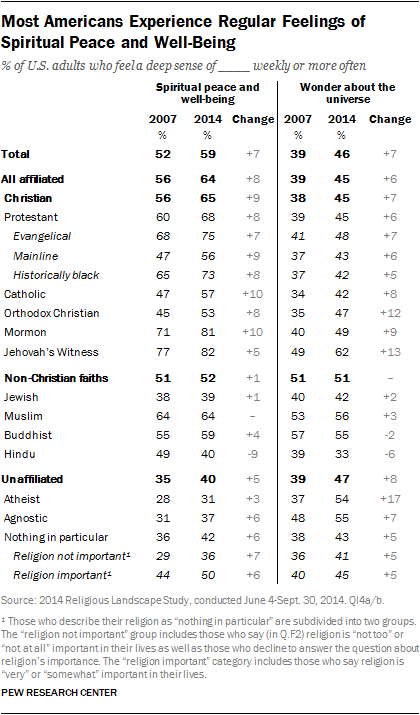 For instance, among U.S. Christians, there has been an increase of 7 percentage points between 2007 and 2014 in the share who say they feel a deep sense of wonder about the universe at least weekly (from 38% to 45%). And there has been a similar rise in the share of religious “nones” who say the same (from 39% to 47%) – not to mention a 17-point jump among self-described atheists.