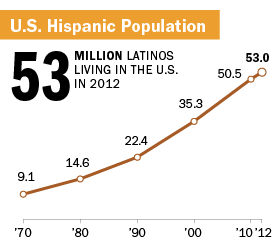 Much of the growth is occurring in a relatively small geographic area. A Pew Research Center analysis last year found that the 10 largest counties by Hispanic population accounted for 22% of the national Hispanic population growth between 2000 and 2011. Half of these counties are located in California.