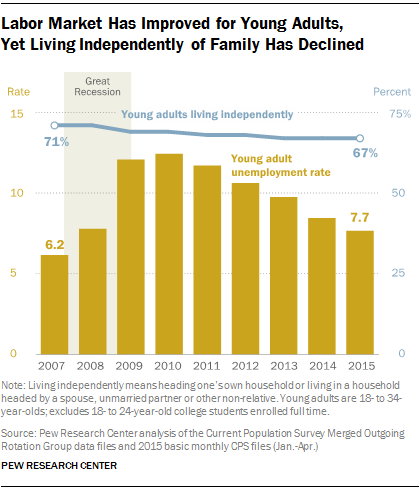 Five years into the economic recovery, things are looking up for young adults in the U.S. labor market. Unemployment is down, full-time work is up and wages have modestly rebounded. But, according to a new Pew Research Center analysis of U.S. Census Bureau data, these improvements in the labor market have not led to more Millennials living apart from their families. In fact, the nation’s 18- to 34-year-olds are less likely to be living independently of their families and establishing their own households today than they were in the depths of the Great Recession.1

In terms of sheer numbers, there are more young adults today than there were when the recession hit – the 18- to 34-year-old population has grown by nearly 3 million since 2007. But the number heading their own households has not increased. In the first third of 2015 about 42.2 million 18- to 34-year-olds lived independently of their families. In 2007, before the recession began, about 42.7 million adults in that age group lived independently.2

The declining numbers reflect a decrease in the rate of independent living during the recovery. In 2010, 69% of 18- to 34-year-olds lived independently. As of the first four months of this year, only 67% of Millennials were living independently. Over the same time period, the share of young adults living in their parents’ homes has increased from 24% to 26%.

Meanwhile, the national unemployment rate for adults ages 18 to 34 declined to 7.7% in the first third of 2015, a significant recovery from the 12.4% who were unemployed in 2010. Other standard benchmarks also demonstrate that nationally the young adult labor market has strengthened. Both job-holding and full-time employment have increased since 2010. In addition, median weekly earnings among young adult workers are up marginally: $574 through the first four months of this year, up from their 2012 low of $547.3 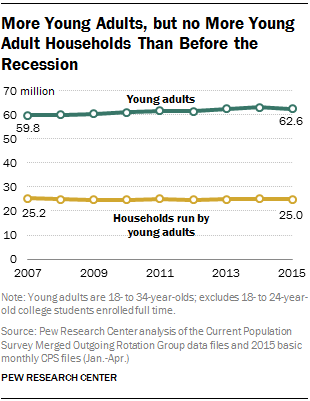 In spite of these positive economic trends and the growth in the 18- to 34-year-old population, there has been no uptick in the number of young adults establishing their own households. In fact, the number of young adults heading their own households is no higher in 2015 (25 million) than it was before the recession began in 2007 (25.2 million). This may have important consequences for the nation’s housing market recovery, as the growing young adult population has not fueled demand for housing units and the furnishings, telecom and cable installations and other ancillary purchases that accompany newly formed households.

Trends in living arrangements also show no significant gender differences during the recovery. However, in 2015, 63% of Millennial men lived independently of family, compared with 72% of Millennial women. But a similar gender difference existed during the Great Recession, and both young men and young women are less likely to live independently today than they were five years ago. 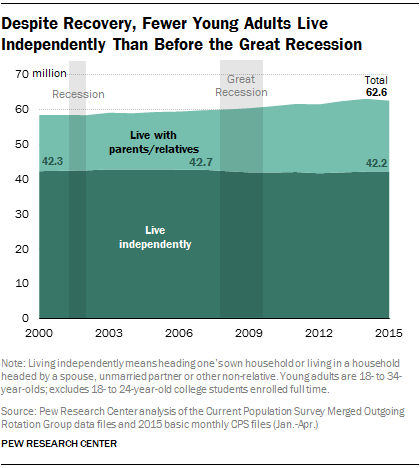 The latest available census data indicate that there has been no significant increase in the number of young adults living independently of their families since the economic recovery officially began. 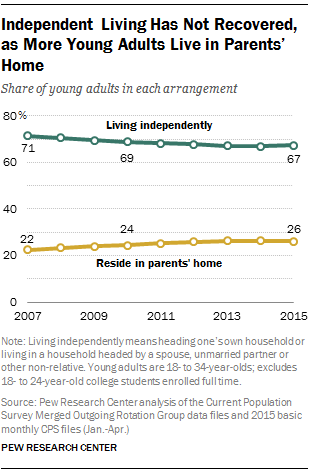 Over this same period the young adult population has swelled in size; today there are nearly 3 million more adults ages 18 to 34 than there were in 2007. Over the course of the recession and recovery the share of young adults living independently has also declined. In the first third of 2015, 67% of Millennials were living independently, compared with 69% of 18- to 34-year-olds living apart from family in 2010 and 71% in 2007.

Most of the decline in independent living since 2007 can be attributed to more young adults living in their parents’ homes. In the first third of 2015, 26% of Millennials lived with their parents. At the beginning of the recovery in 2010, 24% of young adults were living with parents, and in 2007 only 22% were.

Findings in this report are based on the monthly Current Population Survey (CPS). Conducted jointly by the U.S. Census Bureau and the Bureau of Labor Statistics, the CPS is the source for the monthly national unemployment rate. The particular CPS data product analyzed is the Merged Outgoing Rotation Group files (MORG files). Each year’s MORG file includes respondents interviewed each month and provides an annual average. One advantage of the MORG is that it has a substantially larger sample size than a basic monthly CPS. The file has about three times the sample size of a basic monthly file, or about 320,000 respondents ages 16 and older. Furthermore, all respondents in the MORG have detailed information on their hourly or weekly earnings and usual weekly hours. A basic monthly file only has this information for a quarter of the respondents. The MORG files were obtained from the National Bureau of Economic Research website. Helpful documentation is available at http://www.nber.org/morg/docs/cpsx.pdf.

As discussed further in the Appendix, the information for calendar year 2015 is based on a file using the January, February, March and April 2015 basic monthly CPS files, which is referred to as the first third of 2015. Due to seasonality issues, the first third of 2015 may not be strictly comparable to the complete MORG files. 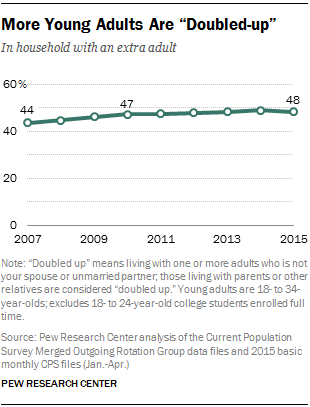 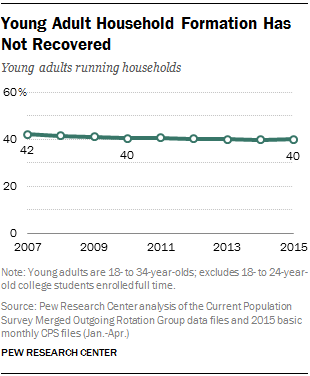 The decline in the rate at which young adults are forming households from 2007 to 2015 has had a negative impact on the demand for the nation’s housing and, in turn, residential construction. Because of the recession, there are substantially fewer households than would have been predicted based on population growth; using CPS data through 2011 an economist estimated that the shortfall in the number of young adult households accounted for almost three-quarters of the total 2.6 million shortfall in households throughout the economy.5 In other words, young adults have been a key demographic in the nation’s housing bust. Four years later, the rate at which they are forming households is no higher than it was in 2011.

Young Adults and the Labor Market Since the Great Recession 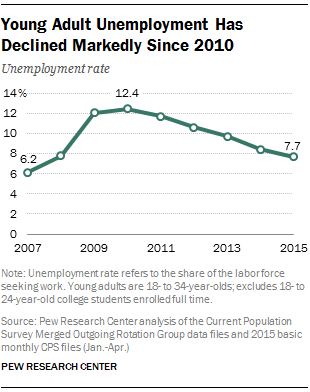 The decline in independent living during the recovery has occurred in the context of a substantial, albeit incomplete, recovery of the labor market for young adults.6 On an annual basis, unemployment among 18- to 34-year-olds peaked at 12.4% in 2010. As of the first third of 2015, unemployment among young adults in this age group was 7.7%, nearly 40% below the peak. However, it was still above the 6.2% unemployment rate in 2007, before the Great Recession.

The unemployment rate only applies to those who are in the labor force and actively seeking work, thus excluding those who may have dropped out because they lost hope of finding a job. But other measures also indicate significant improvements in labor market outcomes for young adults, although the gains may be short of complete recovery.7 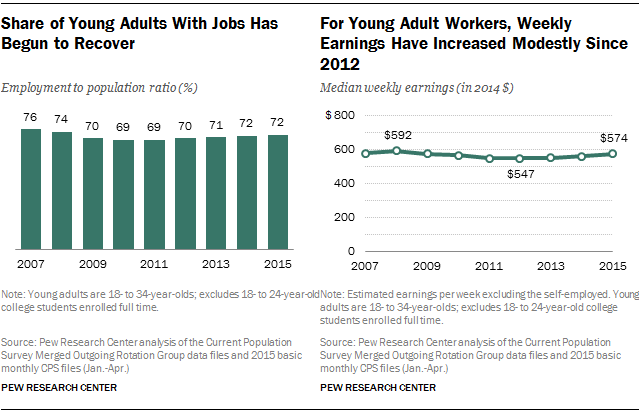 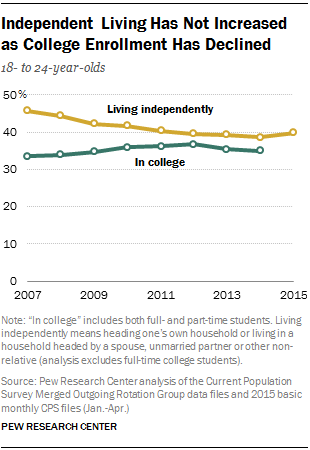 College-going peaked in 2012. By 2014, 35% of 18- to 24-year-olds were pursuing college, down 2 percentage points from the peak. But contrary to expectations, the college enrollment decline has not stimulated an increase in independent living. Today, most younger Millennials do not live independently of family. By the first third of 2015 only 40% of 18- to 24-year-olds were living apart from their families.

For young adults, a college education provided a partial life raft during the recession and has proven beneficial during the recovery as well. College-educated young adults have been quicker to regain the ground they lost in terms of job-holding and wages. But this hasn’t led them to venture out on their own and establish their own households. The downward trend in independent living among young adults has occurred across groups with different levels of educational attainment. 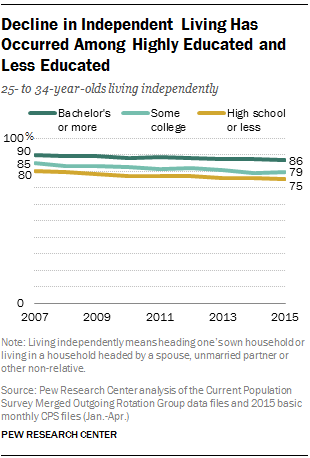 That said, college-educated young adults remain more likely than those without a college degree to live independently of their parents. As of the first third of 2015, 86% of college-educated 25- to 34-year-olds lived independently of family, compared with 75% of 25- to 34-year-olds with no more than a high school education.9 Nonetheless, even among the highly educated, the share living on their own has trended downward during the recovery. Nine-in-ten young adults with at least a bachelor’s degree were living independently in 2007, before the recession hit.

Recent research using credit report data has indicated that student loan debt and difficulties paying off debt deter independent living among young adults.10 Both the likelihood of borrowing for education and the amounts borrowed tend to increase with the young adult’s education. Young adults with no education beyond high school presumably have minimal student debt burdens. The very similar decline in independent living across education groups suggests that additional factors beyond education debt are impacting the decisions to co-reside with family.

College-educated adults continue to be more likely than their less-educated counterparts to establish their own households. Some 51% of 25- to 34-year-olds with at least a bachelor’s degree run a household, compared with only 43% of their peers with no education beyond high school. However, relative to 2007, household formation rates have fallen regardless of education level. In 2007, 54% of bachelor’s degree holders and 46% of those with a high school education or less were heads of households.

Turning to the labor market, if recovery is judged on the basis of return to the labor market outcomes of 2007, before the Great Recession began, then better-educated young adults have fared significantly better than their less-educated counterparts. 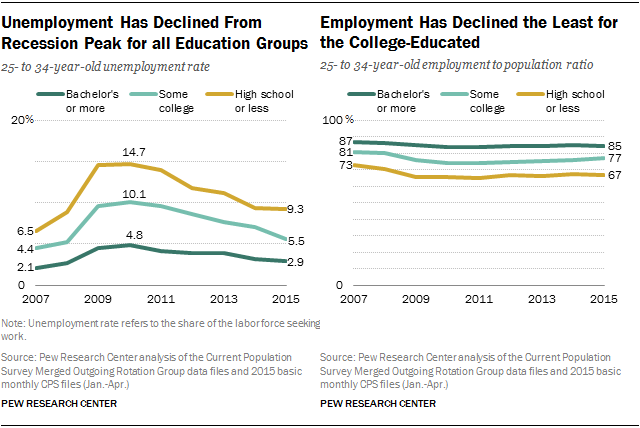 The better fortunes for college-educated young adults are more apparent in job-holding. As of the first third of 2015, 85% of college-educated 25- to 34-year-olds were employed. In 2007, 87% of this group had jobs. Their less-educated peers experienced greater employment declines during the recession, and their employment rates remain substantially below their 2007 levels. For example, among young adults with no education beyond high school, 67% had jobs in the first third of 2015 compared with 73% in 2007. 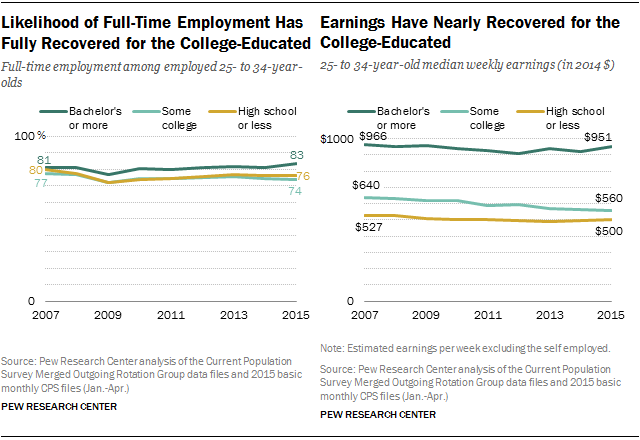 Finally, the weekly earnings of college-educated young adults have nearly recovered. In 2015, the earnings of these workers ($951/week) were almost back to the 2007 level ($966/week). Less-educated workers have seen a more modest recovery in their earnings. For example, for young adults with no education beyond high school, earnings were $500 per week in the first third of 2015, still 5% below their 2007 level ($527/week).

In the labor market, the outcomes of college-educated young adults have made the greatest rebound from the ravages of the Great Recession. But, living arrangements seem to have come unhinged from cyclical labor market conditions as all young adults have become less likely to live independently as the recovery has progressed.

More Millennials Living With Family Despite Improved Job Market
No Recovery in Young Adult Living ArrangementsYoung Adults and the Labor Market Since the Great RecessionIndependent Living and Labor Market Recovery by Education
References About This Report Appendix: Data Source