A record 3.8 million black immigrants live in the United States today, more than four times the number in 1980, according to a Pew Research Center analysis of U.S. Census Bureau data. Black immigrants now account for 8.7% of the nation’s black population, nearly triple their share in 1980.

Rapid growth in the black immigrant population is expected to continue. The Census Bureau projects that by 2060, 16.5% of U.S. blacks will be immigrants.1 In certain metropolitan areas, foreign-born blacks make up a significant share of the overall black population. For example, among the metropolitan areas with the largest black populations, roughly a third of blacks (34%) living in the Miami metro area are immigrants. In the New York metro area, that share is 28%. And in the Washington, D.C., area, it is 15%. 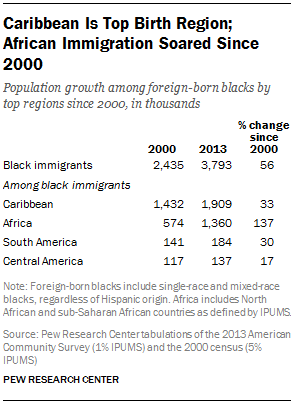 The History of Black Migration to the U.S.

The United States has long had a significant black population.4 In the nation’s earliest censuses (at the end of the 18th century), blacks accounted for nearly one-fifth of the U.S. population, with nearly all brought to the U.S. as slaves from Africa. Today, most of the nation’s 40 million U.S.-born blacks trace their roots to this population.

However, due to the outlawing of the slave trade in 1808 as well as restrictions on non-European immigration, the flow of blacks arriving in the U.S. dropped to a trickle for more than a century and a half. Among the black immigrants who voluntarily migrated during this time, most were from the Caribbean. 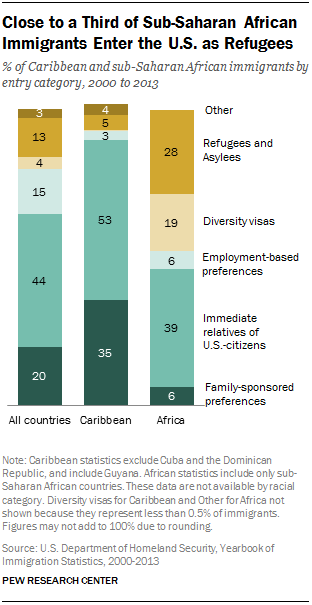 The modern wave of black immigration to the U.S. began when U.S. immigration policy changed in the 1960s, becoming more open to a wider variety of migrants. Just like other immigrants, foreign-born blacks benefited from the Immigration and Nationality Act of 1965 that emphasized family reunification and skilled immigrant labor.5 In addition, the Refugee Act of 1980 loosened immigration restrictions by allowing more immigrants from conflict areas such as Ethiopia and Somalia to seek asylum in the U.S.6 Finally, the U.S. Immigration Act of 1990 sought to increase the number of immigrants from underrepresented nations, and although the act was initially intended to increase the flow of European immigrants, Africans have benefited from the program, as well.7

This act, also known as the diversity visa program, has been an important way for African immigrants to gain entry into the U.S. About one-in-five sub-Saharan African immigrants (19%) who gained legal permanent residence between 2000 and 2013 entered through this program.

Caribbean and sub-Saharan African immigrants are less likely to have been granted admittance via employment-based visa programs than immigrants overall.8

A Statistical Portrait of Black Immigrants 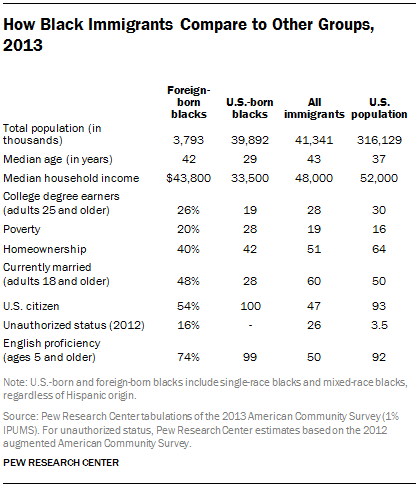 Compared with the U.S. population overall, black immigrants have a slightly higher median age (42 years versus 37 years) and among those that are ages 25 and up, are slightly less likely to have a college degree (26% versus 30%). In addition, black immigrants are less likely than all Americans to own their homes (40% versus 64%), and overall they have lower household incomes.

These findings are based on a Pew Research Center analysis of data from the 2013 American Community Survey in addition to analyses of the 1980, 1990 and 2000 U.S. decennial censuses. The report explores the characteristics of the nation’s black immigrant population in 2013 and how it has changed since 2000. It also compares the characteristics of black immigrants with those of U.S.-born blacks, all U.S. immigrants and the U.S. population. 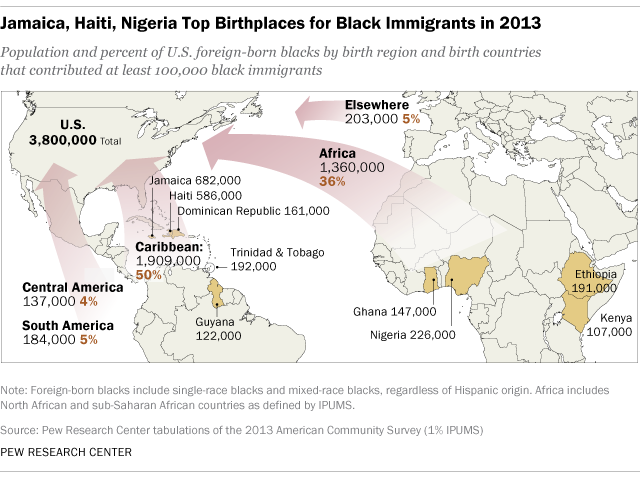 This report explores the demographic, economic and geographic characteristics, as well as population trends, of the black foreign-born population in the United States. Black immigrants are defined as those current U.S. residents born outside the U.S. who indicate that their race is black or is mixed-race black, regardless of Hispanic origin. The report also compares the characteristics of black immigrants to U.S.-born blacks, foreign-born U.S. residents and the general U.S. population. Immigrant population estimates include all immigrants regardless of citizenship or legal status.

The data for this report are from four main sources. The first is the U.S. Census Bureau’s 2013 American Community Survey, which provides the most recent detailed geographic, demographic and economic characteristics for foreign-born blacks, U.S.-born blacks, foreign-born U.S. residents and the general U.S. population. The other data sources are the 1980, 1990 and 2000 decennial censuses (5% IPUMS).

The terms “black immigrants” and “foreign-born blacks” are used interchangeably throughout the report and refer to persons who were both born outside the United States, Puerto Rico or other U.S. territories and whose race is black or is mixed-race black, regardless of Hispanic origin, in 2000 and later U.S. Census Bureau surveys. For previous census years (1980 and 1990), “black immigrants” or “foreign-born blacks” refer to persons born outside the U.S., Puerto Rico or other U.S. territories whose race is black, regardless of Hispanic origin. Prior to 2000, respondents to Census Bureau surveys and its decennial census could make only one selection in the race question. In 2000 and later, respondents were able to indicate they were of more than once race. Immigrant population estimates include all immigrants regardless of citizenship or legal status.

“U.S. born” refers to those who are U.S. citizens at birth, namely people born in the U.S., Puerto Rico or other U.S. territories and those born abroad to at least one parent who was a U.S. citizen.

Next: Chapter 1: Statistical Portrait of the U.S. Black Immigrant Population
← Prev Page
You are reading page1Page2Page3Page4Page5
Next Page →