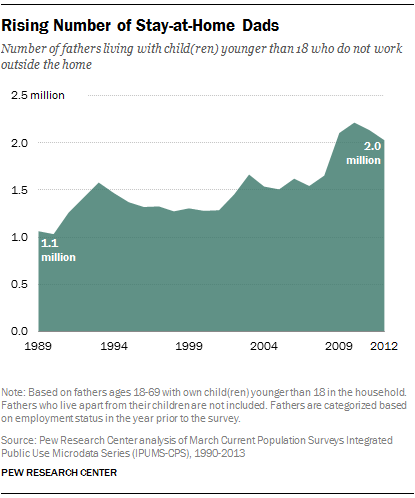 The number of fathers who do not work outside the home has risen markedly in recent years, up to 2 million in 2012.1 High unemployment rates around the time of the Great Recession contributed to the recent increases, but the biggest contributor to long-term growth in these “stay-at-home fathers” is the rising number of fathers who are at home primarily to care for their family.

The number of fathers who are at home with their children for any reason has nearly doubled since 1989, when 1.1 million were in this category.2 It reached its highest point—2.2 million—in 2010, just after the official end of the recession, which spanned from 2007 to 2009. Since that time, the number has fallen slightly, driven mainly by declines in unemployment, according to a new Pew Research Center analysis of U.S. Census Bureau data.3 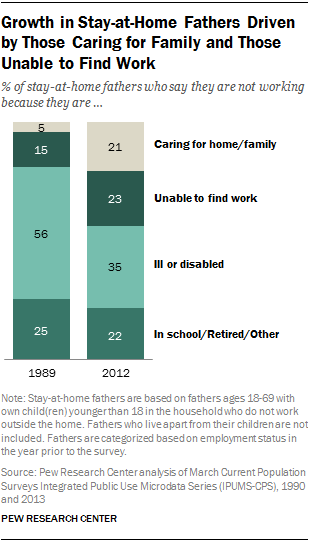 While most stay-at-home parents are mothers, fathers represent a growing share of all at-home parents – 16% in 2012, up from 10% in 1989. Roughly a quarter of these stay-at-home fathers (23%) report that they are home mainly because they cannot find a job. Nearly as many (21%) say the main reason they are home is to care for their home or family. This represents a fourfold increase from 1989, when only 5% of stay-at-home fathers said they were home primarily to care for family. 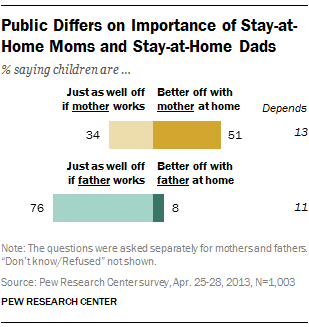 There are many potential reasons why more fathers with young children are at home these days. A 2012 Pew Research Center survey found that working fathers with children under age 18 are just as likely as working mothers to say that it is difficult for them to balance the responsibilities of their job with the responsibilities of their family. In addition, roughly equal shares of working fathers (48%) and mothers (52%) said they would prefer to be at home raising their children, but they need to work because they need the income.

Analyses of the trends and demographic characteristics of U.S. fathers who live with their children are based on data from the 1990-2013 Annual Social and Economic Supplement (ASEC) of the Current Population Survey (CPS), which is conducted jointly by the U.S. Census Bureau and the Bureau of Labor Statistics. These data are collected each March and included about 90,000 household interviews in 2013. The data were obtained from the Integrated Public Use Microdata database (IPUMS-CPS), provided by the University of Minnesota. Further information about the IPUMS is available at http://www.ipums.org.

The Pew Research Center analyses include all men ages 18-69 who report living with at least one of their own children (biological, step or adopted) younger than 18 years of age. Fathers are categorized as “working” or “stay-at-home” based upon their employment status during the prior year. This is generally similar to the approach adopted by the U.S. Census Bureau.

However, while the Pew Research Center estimates that about 2 million fathers are stay-at-home dads, the Census Bureau, which uses a much more restrictive definition, puts that number at about 214,000.

While the Census Bureau limits the definition of stay-at-home fathers to those living with children (under the age of15) who state that they are home for the entire year in order to care for home and family, the definition used here encompasses any father (of a child younger than 18) who has not worked for pay in the prior year, regardless of the reason.

Furthermore, when discussing stay-at-home parents, the Census typically limits analysis to families with a married husband and wife, where one spouse is in the labor force all of the prior year. In contrast, the definitions used here are not contingent on marital status, having a spouse or partner of the “opposite” sex, or on the work status of the spouse or partner.

Unless otherwise noted, “fathers,” in this report are men ages 18-69 who are living with their own children (biological, step or adopted) younger than 18.

“Stay-at-home fathers” refers to those fathers not employed for pay at all in the prior year and living at home with their children younger than 18.

References to respondents who are “high school graduates” or who have a “high school diploma” also include those who have earned an equivalent degree, such as a GED (General Educational Development) certificate.

Poverty is based on the U.S. Census Bureau measure. This measure is defined by an income threshold that is dependent on family composition and income, adjusted for inflation. In 2012, the official poverty threshold for a family of four was $23,283.

Next: Chapter 1: The Likelihood of Being a Stay-at-Home Father
← Prev Page
You are reading page1Page2Page3Page4Page5
Next Page →

Growing Number of Dads Home with the Kids
Chapter 1: The Likelihood of Being a Stay-at-Home Father Chapter 2: Why Are Dads Staying Home? Chapter 3: How Do Stay-at-Home Dads Compare with Working Dads? Key Shareable Findings