In 2012, two million fathers were living with at least one of their children less than 18 years of age, and had not been employed outside of the home for a year or more. This marked a 90% increase in the number of stay-at-home fathers since 1989, when 1.1 million fathers were at home with their children. While the number of stay-at-home fathers increased over this period, the number spiked to 2.2 million in the wake of the Great Recession, before declining somewhat to its present level of roughly 2 million.

Though their numbers are growing, stay-at-home fathers are still a small share of all fathers who live with their children. In 1989, 4% of these fathers were at home. That share doubled following the recession, and now stands at 7%. In comparison, the share of mothers at home dropped from 28% in 1989 to 23% in 1999, and has now risen back up to 29%.

The share of fathers at home rose among each of these groups in the wake of the recession, before declining to their present levels. The biggest increases occurred among blacks, Hispanics and Asian Americans; and a more modest increase occurred among whites. From 2007 to 2010, the share of black fathers living with their children who stayed home full time increased 5 percentage points, to 17%. During that same period, Hispanics and Asian Americans experienced small increases (to 9% and 10%, respectively). Among whites, the share of at-home fathers peaked at 7% in 2011, up from 5% in 2007.

The likelihood of being a stay-at-home father is similar for both native-born and foreign-born fathers. Some 8% of fathers born in the U.S. who live with their children are stay-at-home fathers, as are 7% of those who were born elsewhere. This is in contrast to the pattern in 1993 (when data by nativity were first available), when foreign-born fathers were twice as likely as the native-born to be home (10% were, as compared with 5% of the native born).

The association of race, ethnicity and nativity with the likelihood of being an at-home parent is very different among mothers. Hispanic and Asian-American mothers are the most likely to be at home (more than one-third of each are), followed by 27% of black mothers and 26% of white mothers. The high share of Asian and Hispanic stay-at-home mothers is driven, in part, by the prevalence of immigrants in these groups. While nativity isn’t linked to the likelihood of staying at home for fathers, foreign-born mothers are far more likely to be at home with their children than mothers born in the U.S. 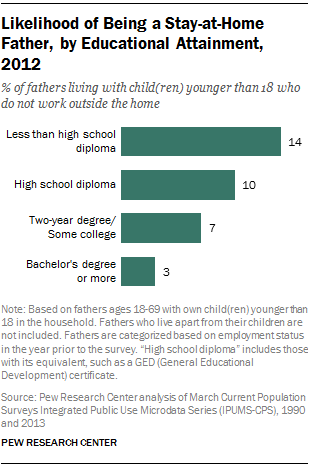 Among dads who live with their children, those with the lowest levels of education are among the most likely to be stay-at-home dads. Some 14% who lack a high school diploma are at home, as are 10% of those with a high school diploma but no further education. Among fathers with some college experience or a two-year degree, 7% are at home, while just 3% of those who have a bachelor’s degree or more are not working. Similarly, among mothers, the more educated are the least likely to be at home with their children.

Next: Chapter 2: Why Are Dads Staying Home?
← Prev Page
Page1You are reading page2Page3Page4Page5
Next Page →