The role of fathers in the modern American family is changing in important and countervailing ways. Fathers who live with their children have become more intensely involved in their lives, spending more time with them and taking part in a greater variety of activities. However, the share of fathers who are residing with their children has fallen significantly in the past half century. 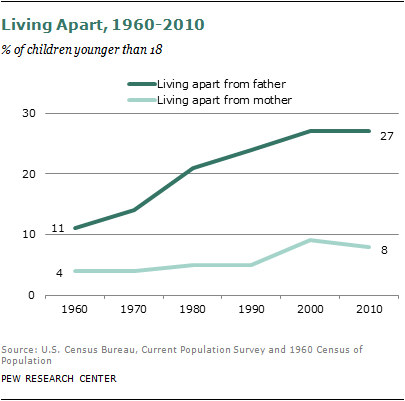 Fathers’ living arrangements are strongly correlated with race, ethnicity and socioeconomic status as measured by educational attainment. Black fathers are more than twice as likely as white fathers to live apart from their children (44% vs. 21%), while Hispanic fathers fall in the middle (35%). Among fathers who never completed high school, 40% live apart from their children. This compares with only 7% of fathers who graduated from college.

More Time Spent, But Fewer Fathers in the Home 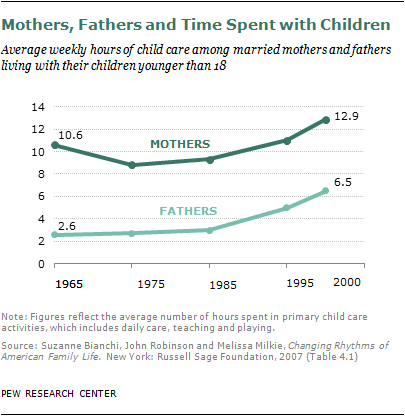 Alongside this trend toward more time spent with children is a trend toward more children living apart from their fathers. Declining marriage rates and increases in out-of-wedlock births and multi-partner fertility have given rise to complicated family structures and have increased the likelihood that fathers will not reside with all of their children.2 According to the NSFG, nearly half of all fathers (46%) now report that at least one of their children was born out of wedlock, and 31% report that all of their children were born out of wedlock. In addition, some 17% of men with biological children have fathered those children with more than one woman.3

Living Apart from the Kids 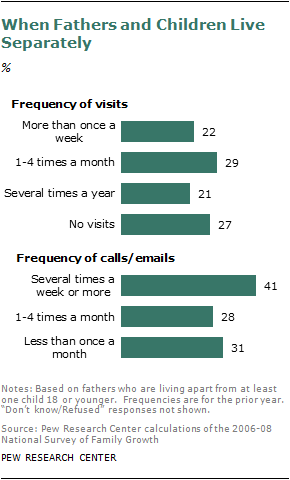 Communicating by phone or email is more prevalent than face-to-face contact. Among fathers who live apart from their minor children, 41% say they are in touch with them via phone or email several times a week; 28% say they communicate at least monthly. Still, a sizable minority (31%) say they talk on the phone or email with their children less than once a month. 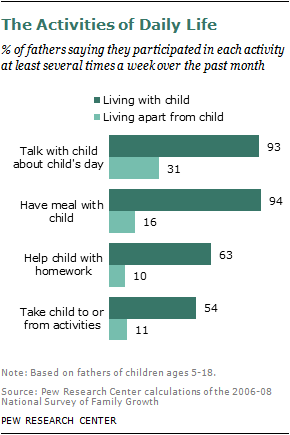 Are You a Good Father?

A father’s presence or absence in the home is closely related to how he evaluates the job he is doing as a parent. Among fathers who live with their children at least part of the time, nearly nine-in-ten say they are doing a very good (44%) or good (44%) job as fathers to those children. An additional 11% classify themselves as okay fathers, and less than 1% say they are doing a bad or not very good job as a father.

This report is based mainly on Pew Research Center analysis of the 2006-08 National Survey of Family Growth (NSFG). The NSFG gathers information on family life, marriage and divorce, pregnancy, infertility, and men’s and women’s health. The survey is an ongoing initiative of the U.S. Centers for Disease Control and Prevention. Data used for this report are drawn from Cycle 7, which was a continuous survey conducted from June 2006 to June 2010. Data from 2006-08 is based on interviews with 13,495 respondents ages 15-44; 7,356 were female and 6,139 male. Unless otherwise noted, all findings in this report are from the NSFG.

The results of a new Pew Research Center survey complement the findings from the NSFG. The Pew Research survey was conducted by landline and cellular telephone May 26-29 and June 2-5, 2011, among a nationally representative sample of 2,006 adults living in the continental United States.

The report is divided into three sections: (1) Overview; (2) Living Arrangements and Father Involvement; (3) Attitudes about Fatherhood. A detailed methodology and topline can be found in the appendices.

The definition of “father” varies from question to question in the report, in order to reflect the wording and structure of the NSFG.

The terms “whites,” “blacks” and “African Americans” are used to refer to the non-Hispanic components of their populations. Hispanics can be of any race.

Next: Chapter 1. Living Arrangements and Father Involvement
← Prev Page
You are reading page1Page2Page3Page4
Next Page →

A Tale of Two Fathers
OverviewMore Time Spent, But Fewer Fathers in the HomeLiving Apart from the KidsFathers, Children and Day-to-Day ActivitiesAre You a Good Father?Other Key Findings
Chapter 1. Living Arrangements and Father Involvement Chapter 2. Attitudes About Fatherhood Appendix I. Methodology