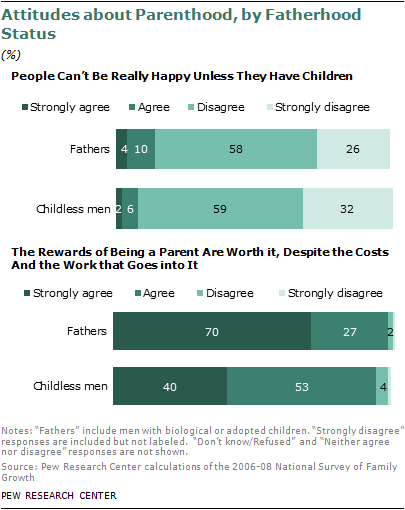 While few think that parenthood is crucial to happiness, the vast majority of all men, whether fathers or childless, believe that the rewards of being a parent are worth it despite the costs and the work that goes into it. Among fathers, 70% strongly agree and 27% agree. The majority of non-fathers also concur with the statement, but only 40% strongly agree, while 53% agree. 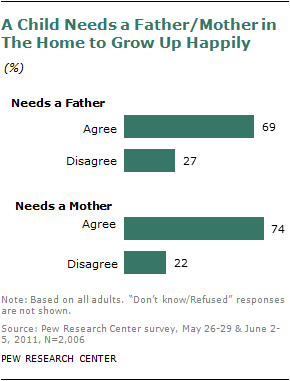 Men, whether they are fathers or not, are much more likely than women to say a child needs a father in the home. Fully 77% of men (including 79% of fathers with children younger than 18) agree that a child needs a father at home to grow up happily. Only 61% of women (including 60% of mothers with children younger than 18) agree.

When it comes to the importance of having a mom in the home, men and women are in closer agreement. Roughly eight-in-ten men (79%) and 71% of women agree that a child needs a mother in the home to grow up happily. 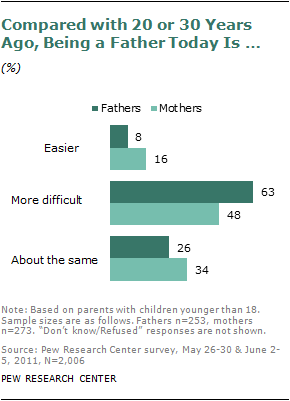 Time use data indicate that married fathers are spending much more time these days caring for their children than fathers did a generation ago. However, the public is not convinced that all fathers have taken on a more prominent role in the children’s lives. When asked whether fathers today generally play a greater role or a lesser role in raising their children compared with fathers 20 or 30 years ago, 46% say fathers play a greater role now while an equal share (45%) say today’s fathers play a lesser role. Only 3% say there has been no change.

Among men, fathers with children younger than 18 are more likely than other men to say dads have taken on a greater role in recent decades (52% vs. 39%). 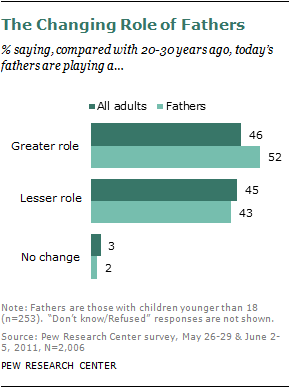 Next: Appendix I. Methodology
← Prev Page
Page1Page2You are reading page3Page4
Next Page →