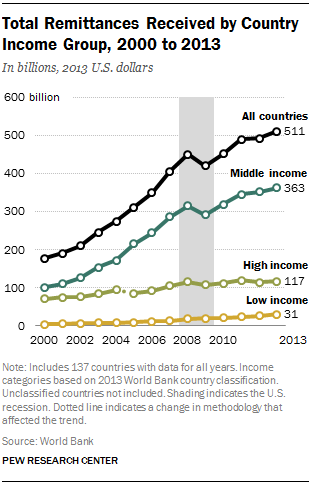 By any measure, India and China are the top global recipients of remittances, according to World Bank data. They also are the top receiving nations among middle-income countries. In 2013, India received an estimated $71 billion in remittances, and China an estimated $60 billion. Among the other top middle-income receiving nations for remittances are the Philippines ($26 billion), Mexico ($22 billion) and Nigeria ($21 billion). 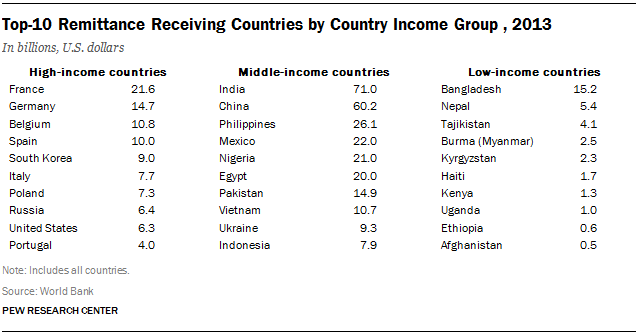 Among the world’s poorest countries, Bangladesh ranks first as a remittance receiving nation, taking in $15 billion in 2013, according to World Bank estimates. Among the other top low-income receiving nations are Nepal ($5 billion), Tajikistan ($4 billion), Burma (Myanmar) ($3 billion) and Kyrgyzstan ($2 billion). 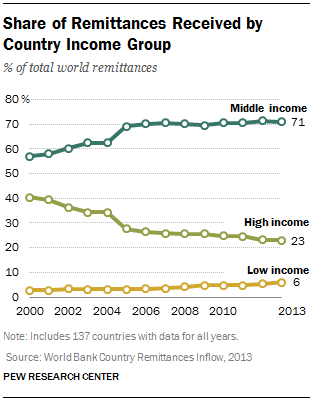 High-income nations receive 23% of worldwide remittances, according to World Bank 2013 estimates. That share has declined from 40% in 2000. Most of the decline came before the mid-2000s. 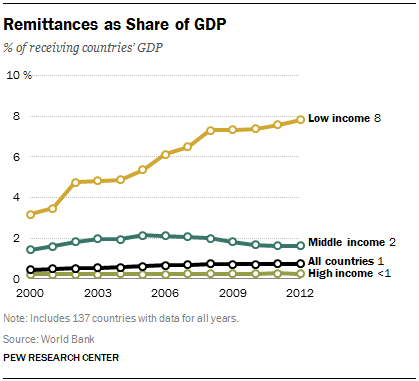 Remittances represent a higher share of GDP in poorer nations than in richer ones and also have grown more sharply as a share of GDP. Among all low-income nations, remittances accounted for an estimated 8% of GDP in 2012. The contribution of remittances to the GDP of low-income nations overall has more than doubled since 2000, when money sent home by migrants represented about 3% of those countries’ GDP. These nations, however, receive a small share of all world remittances.

Among middle-income nations, remittances represented less than 2% of GDP in 2012, according to an analysis of World Bank estimates.

Meanwhile, among high-income nations, remittances are a much smaller share of 2012 GDP, less than 1%, according to an analysis of World Bank estimates.

Next: Appendix A: Methodology
← Prev Page
Page1Page2Page3You are reading page4Page5Page6Page7
Next Page →