The greater movement from middle-income countries is to some extent linked to underlying regional changes in migration. In sum, the origins of the international migrant population have changed in recent decades, becoming more Asian and Latin American or born in what is sometimes refered to as the Global South.4 At the same time, the origins of migrants have become less European. 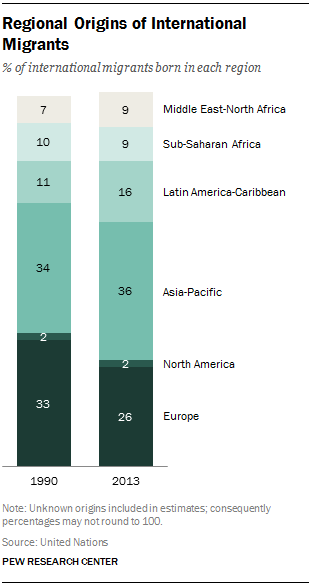 In 1990, about one-third (33%) of international migrants were born in Europe. Many of these “migrants” had moved within the Soviet Union before the collapse of the USSR and were not considered migrants when they moved. When country boundaries were changed, their status changed to migrant or foreign born. About a third (34%) of international migrants in 1990 were born in countries in the Asia-Pacific region, including many in the Indian subcontinent and high-emigration countries such as China and the Philippines.

The remaining third of migrants in 1990 were born in the Latin America-Caribbean (11%), sub-Saharan Africa (10%) and Middle East-North Africa (7%) regions. Much of the movement of migrants in these regions occurred across nearby borders such as Mexicans migrating to the U.S.

Movement from Latin-America and the Caribbean to the U.S. also increased between 1990 and 2013. Consequently, a greater share (16%) of international migrants in 2013 had been born in Latin American and Caribbean countries than in 1990.

At the same time, a lower share of the world’s migrants by 2013 had been born in Europe (26%), a consequence of less migration within Europe, but also an aging migrant population in Russia and nearby countries that began to die off.

In light of these regional and economic shifts, a greater number of migrants have left some countries than others. Consequently, top origin countries of international migrants have changed considerably during the past quarter century. 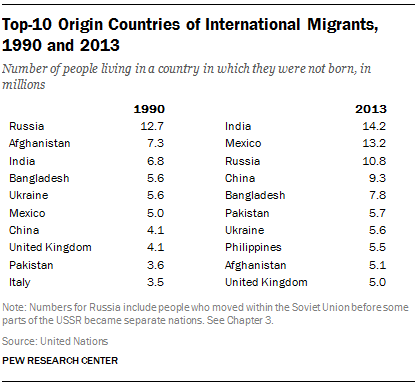 The high number of migrants in 1990 from Russia (12.7 million) and Ukraine (5.6 million) is largely the result of changing borders during the fall of the USSR. However, migrants have continued to leave these countries, albeit less so than other top origin countries. Consequently, Russia’s ranking fell from top origin country in 1990 to third place in 2013, with 10.8 million migrants. Ukraine also dropped its ranking by 2013, though its total of 5.6 million migrants was the same in 2013 as it had been in 1990.

Political strife and military conflict continued to plague Afghanistan and nearby countries during recent decades. For these reasons, more than 7 million Afghans lived outside of Afghanistan in 1990, many in Iran, Pakistan and other nearby countries. In 2013, that number decreased to slightly more than 5 million people.

Each historical era has prominent countries of origin for international migrants. Among the examples: Around the beginning of the 20th century, many Italians left for the United States and countries in South America. After the Second World War, some people from the United Kingdom moved to Canada, Australia and the U.S. to join military spouses. The impact of these movements is reflected in migrant populations in 1990. Consequently, these earlier waves of migrants from Italy and the UK led to high origin rankings, with more than 4 million people born in the UK living outside of the UK and 3.5 million Italian-born migrants living elsewhere. With the passage of time, these migrant populations began to decline as the earlier migrants died and were not replaced by new migrants.

Migrant origins can be ranked by the number of international migrants who have left their birth countries. But the share of country populations that has migrated out provides another interesting point of view. 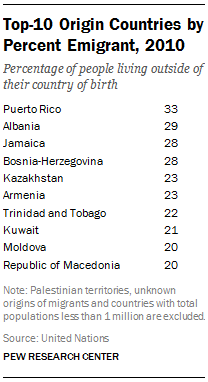 Although some may not consider movement from Puerto Rico to the U.S. as an international move, definitions employed by the U.N. (and as used in this report) consider Puerto Rico a separate territory from the U.S. Based on this definition, about a third of people born in Puerto Rico live outside of Puerto Rico.

Almost all migrants from Puerto Rico live in the U.S., as do migrants from other top origin countries by percent emigrant such as Jamaica (28%) and Trinidad and Tobago (22%).

Poor economic conditions explain most emigration from several countries in Eastern Europe. For example, nearly a third (29%) of people born in Albania no longer live in Albania, while about a fifth (20%) of Moldovans live outside of Moldova.

Conflict has led a large number of people to leave their countries of birth. For example, several countries once part of the former Yugoslavia such as Bosnia-Herzegovina and the Republic of Macedonia have had high rates of emigration. Similarly, large percentages of Kuwaitis left during the first Gulf War.

A number of factors may explain the high percentage of migrants born in Kazakhstan (23%) and Armenia (23%). Historical connections to nearby countries have led many people in these countries to move, as have high unemployment and social hostility toward some minority groups.