Patterns of global migration and remittances have shifted in recent decades, even as both the number of immigrants and the amount of money they send home have grown, according to a new Pew Research Center analysis of data from the United Nations and the World Bank.

A rising share of international migrants now lives in today’s high-income countries such as the United States and Germany, while a growing share was born in today’s middle-income nations such as India and Mexico, the analysis finds. 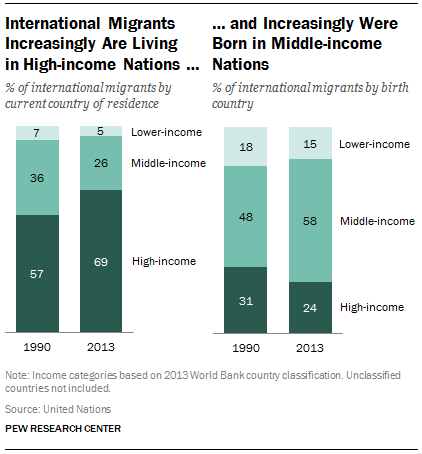 These shifts occurred as the total number of international migrants rose from 154 million in 1990 to 232 million in 2013 – but remained steady as a 3% share of the globe’s growing population.

During this period, the U.S. remained the largest destination country by far and increased its share of the world’s migrants. One-in-five (46 million) migrants now live in the U.S., compared with slightly less than one-in-six (23 million) in 1990.

The U.S. is not the only wealthy destination country whose share of the world’s migrants has increased. All told, an estimated 160 million, or 69%, of international migrants now live in high-income countries (nations with an average per capita income of $12,616 or higher), up from 87 million, or 57%, in 1990, the Pew Research analysis finds. These high-income countries, many of them in North America and Europe, may appear increasingly attractive to modern migrants, whose principal reason for moving is to pursue economic opportunity. 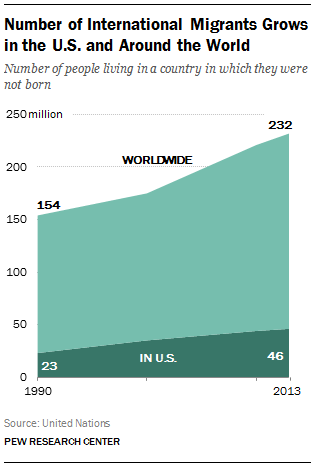 Where do today’s migrants come from? Increasingly, they were born in what the World Bank designates as middle-income countries, those with per capita annual income between $1,036 and $12,615. About six-in-ten (135 million) of today’s international migrants were born in such countries, compared with fewer than half (74 million) of all migrants in 1990. Over the same period, the share of immigrants born in high- as well as low-income nations has declined.1

Once they move across borders, many migrants send money, known as remittances, back to families in their countries of origin. Despite a marked dip during the 2009 global recession, the overall annual flow of such remittances has nearly tripled since 2000 and now tops $500 billion.2 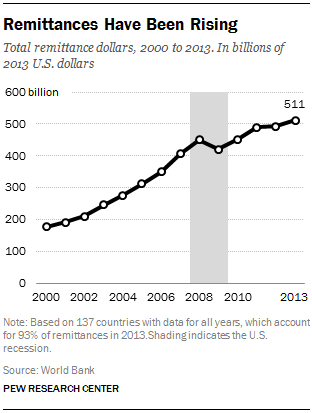 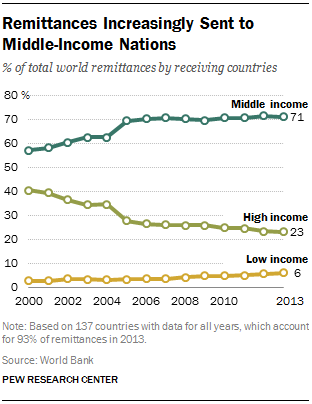 As a Destination, the U.S. Looms Large

The number of immigrants in the U.S. doubled from 23 million people in 1990 to 46 million in 2013. During this time, no other country has come close to the number of foreign-born people living within its borders. For example, second-ranked Russia had about 11 million immigrants in both 1990 and 2013 (many of whom had moved within the former USSR prior to 1990). Consequently, the U.S. has bolstered its lead in the number of international migrants, doubling second-place Russia in 1990 and quadrupling it by 2013.

The U.S. has also become a major recipient of migrants from key countries with large numbers of emigrants. Although the U.S. was not a leading destination of migrants born in top origin countries in 1990, things have changed considerably in a quarter century. By 2013, nearly 1-in-6 (2.1 million) migrants born in India—the top country of birth for international migrants in 2013–lived in the U.S. Almost the entirety of the 13 million migrants born in Mexico–the second highest country of birth for international migrants in 2013—also lived in the U.S.

In Other Ways, U.S. Is in the Middle of the Pack 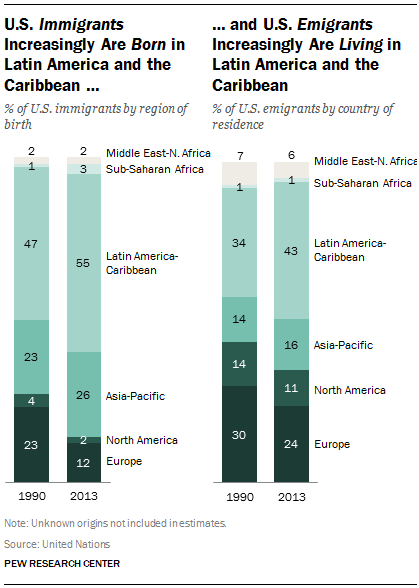 Even with this growth, the foreign born as a share of the total population is still considerably lower in the U.S. than in a number of other major destination nations. About 14% of the U.S. population in 2013 was foreign born, a smaller share than in Australia (28%) and Canada (21%), and significantly less than in some countries in the Persian Gulf, where the vast majorities of their populations are foreign-born workers. 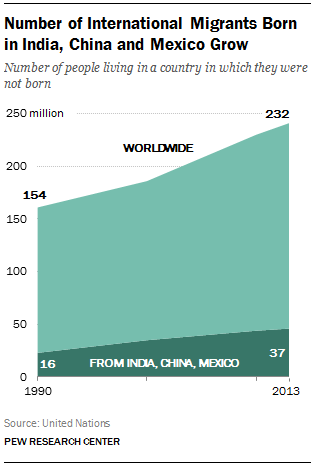 The U.S. receives many more migrants than it sends. Nonetheless, nearly 3 million Americans lived outside of the U.S. in 2013, up from 1.8 million in 1990.

The U.S. also has a significantly lower rate of emigration than most countries. For example, about 1% of Americans currently live outside of their country of birth, compared with about 20% of people born in several Eastern Europe countries and more than 4% of people born in countries such as the United Kingdom and Canada.

Road Map to the Report

Chapter 2 of the report looks at the share and number of international migrants in national and regional destinations, as well as trends from 1990 to 2013. Chapter 3 looks at the origin countries of international migrants and trends from 1990 to 2013. Chapter 4 looks at global trends in remittances and compares patterns in receiving nations by income category. Additional information is provided in Appendix A: Methodology and Appendix B, which lists countries included in the World Bank’s high-, middle- and low-income nation categories. Appendix C lists countries by their regional classification.

This report examines trends in international migrant population from 1990 to 2013 and in international remittance flows from 2000 to 2013. The migration estimates in this report refer to the total number (or cumulative “stocks”) of migrants living around the world rather than to the annual rate of migration (or current “flows”). Migration and remittance patterns are analyzed for groups of low-, middle- and high-income nations, using World Bank categories; migration patterns also are analyzed for regions and individual nations. Analysis is based on migration stock data from the United Nations and migrant remittance data from the World Bank.

“International migrants,” as defined by the United Nations, are those living for one year or longer in a country other than the one in which they were born. Thus, many foreign workers and international students are counted as migrants, as are refugees and, in some cases, their descendants. Total migrant stock includes unauthorized or illegal immigrants living in various countries.

The economic classification of countries used in this report follows the World Bank’s categories of low-, middle- and high-income countries based on per capita, global national income (GNI) in U.S. dollars. GNI cut points separating low-, middle-, and high-income countries are based on World Bank lending rules. The country classifications in this report use 2013 country groups; however, further comparisons using the World Bank’s country groups in 1990 produce similar patterns. For a listing of countries by their economic classification, see Appendix B.

“Remittances” are funds or other assets sent to their home countries by migrants, either themselves or in the form of compensation (wages) for border, short-term and seasonal employees. The World Bank reports only remittances sent via formal channels, such as banks and other businesses that transfer money.

Next: Chapter 2: Migrant Destinations
← Prev Page
You are reading page1Page2Page3Page4Page5Page6Page7
Next Page →