One of the challenges for working parents is finding enough time to do it all. Many say they feel rushed, and more than half say they have difficulty balancing the responsibilities of their job and their family life. While working mothers and fathers divide their time differently—with fathers concentrating somewhat more on paid work and mothers more on home and children—moms and dads are equally likely to find the juggling act challenging. 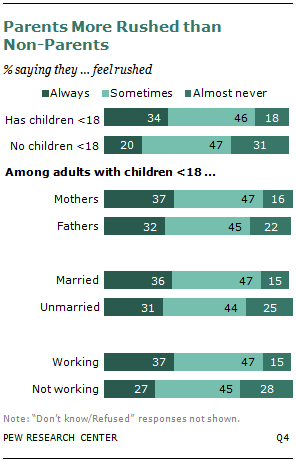 Parents who live in dual-income households report feeling busier than those who live in a household where only one spouse or partner is employed. About four-in-ten (39%) parents in dual-earner partnerships say they are always rushed, compared with 28% of parents for whom either they or their partner is not working. 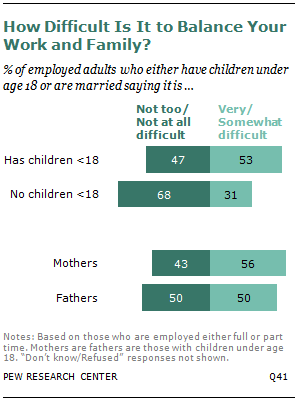 In the Pew Research survey, this question was asked among employed people who were either parents of children younger than 18 or married. Those who did not have children under age 18 (i.e., who are married with grown children or married without any children) were less likely than parents of young children to say it was difficult for them to manage work and family simultaneously—31% of those without children under age 18 say this balance is very or somewhat difficult, compared with 53% of those who have young children.

Parents in dual-income households are no more likely than those in single-income households to say it is very or somewhat difficult to balance the responsibilities of work and family life (54% vs. 49%, respectively).

There is no historical trend for the Pew Research question, so it is difficult to say how the level of difficulty men and women experience in balancing work and family life has changed over time. However, another national survey offers some clues. The Families and Work Institute conducted a survey of the U.S. workforce in 2008 that included questions about work-life balance. This survey found that fathers were more much likely to feel conflicts between their working lives and personal lives in 2008 than they had been in 1977, while mothers experienced only a modest increase in these conflicts over the same period. In 1977, 35% of employed fathers whose spouse or partner worked and 41% of employed mothers in dual-earner couples said they experienced at least some work-life conflict.8 In 2008, the share of fathers saying this had increased to 60%, while the share of mothers saying so went up only marginally to 47%.9

Working vs. Staying Home with the Kids 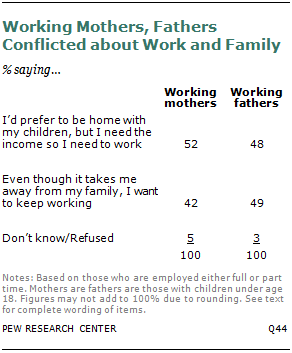 Not only do many working mothers and fathers find it difficult to balance work and family, fully half say they would like to be home with their children, rather than working. Survey respondents were asked which statement best describes how they balance work and family: (1) They would prefer to be at home raising their children, but they need to work because they need the income; or (2) Even though it takes them away from their family, they enjoy their work and want to keep working. Among all working parents with children under age 18, 50% say they would prefer to be home raising their children, while 46% say they want to keep working.

Mothers and fathers have nearly identical views on this question. Roughly half of working mothers (52%) and fathers (48%) say they would prefer to be home with their children but they have to work because they need the income. Some 42% of mothers and 49% of fathers say that even though work takes them away from their families, they enjoy their work and want to keep working. (These differences are not statistically significant.) 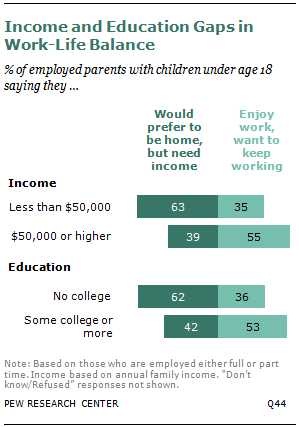