This chapter summarizes findings on a wide range of survey topics on which generational differences are mixed, nonexistent or varied between Asian Americans and Hispanics. Among the topics covered are evaluations of the United States versus one’s ancestral country of origin; personal values and goals; perceptions of discrimination and group success; and attitudes about work and social trust.

How the U.S. Compares with Country of Origin 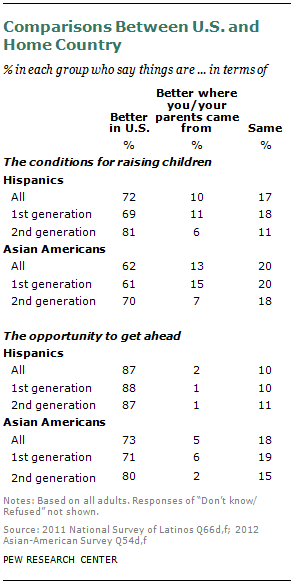 Majorities of Latinos and Asian Americans say the United States is better than their country of origin in terms of opportunities to get ahead, treatment of the poor and conditions for raising children. Fewer than half rate the United States as being better than the country where they or their ancestors came from in terms of the strength of family ties and its moral values. Across these five ratings, few generational differences emerge, however.

Generational differences are seen when it comes to rating conditions for raising children. Second-generation Hispanics and Asian Americans are significantly more likely than the immigrant generation to say the United States is a better place than their country of origin to raise children (81% versus 69% for Latinos, 70% versus 61% for Asian Americans).

A mixed pattern emerges when the focus turns to opportunities to get ahead. Virtually identical proportions of first- and second-generation Latinos say chances for advancement are better in the U.S. (88% and 87%, respectively). But among Asian Americans, a larger share of the second generation (80%) than the first (71%) sees more opportunities in this country.

No significant generational differences emerge among Latinos on the three other conditions tested in the survey or among Asian Americans on two of the three.

The two generations in both groups also resemble each other in their views about the strength of family ties in U.S. compared with their country of origin. About four-in-ten first- and second-generation Latinos say family ties are stronger in their country of origin (39% and 44%, respectively); majorities of first- and second-generation Asian Americans (57% and 60%, respectively) say the same thing. 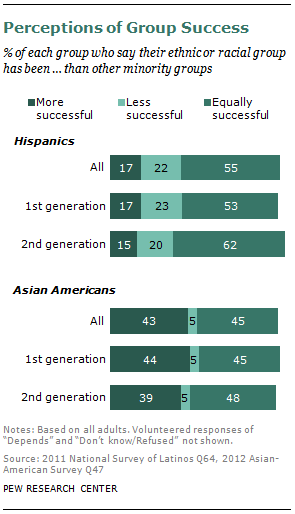 A mixed generational pattern emerges when Hispanics and Asian Americans are asked how well their group has done in the U.S. compared with other minorities.

Benefits and Burdens of Race, Ethnicity

When respondents are asked whether their race or ethnicity helps or hurts them in finding a job, winning a promotion or getting admitted to schools and colleges, a varied generational pattern emerges.

As a group, Latinos have mixed views over the effect that being of their ethnic group has on getting a job or a promotion, or applying for admission to schools and colleges. Second-generation Hispanics, more so than the first generation, say there is no effect of being Hispanic on either getting a promotion at work or on gaining admission into schools and colleges. Immigrants are more likely than the second-generation to say that being Hispanic helps in both situations. There are no significant generational differences in views about the effect of being Hispanic on getting a job. 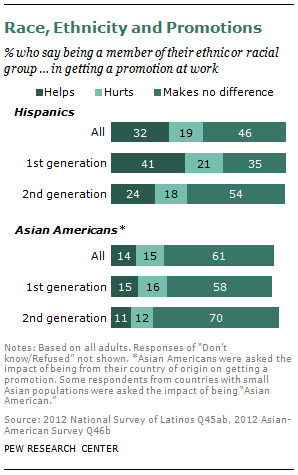 Promotions: First-generation Hispanics are considerably more likely than those in the second generation to say that their ethnicity helps rather than hurts their chances of getting a promotion (41% versus 24%).

At the same time, roughly equal shares of both generations say that being Latino hurts promotion chances (21% for the first generation versus 18% for the second). The remainder says it makes no difference.

Among Asian Americans, roughly similar proportions of the first and second generations say their race or country of origin helps them get promotions (15% for the first generation; 11% for the second) or hurts their chances (16% versus 12%). But the immigrant generation is significantly less likely than the second to say makes no difference (58% versus 70%). 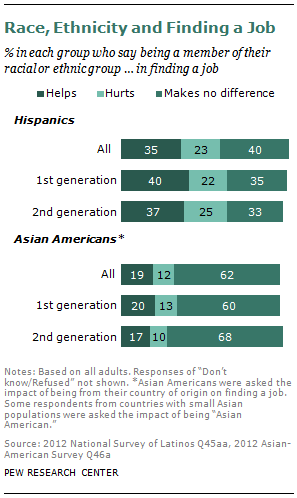 Among Latinos, about four-in-ten of the first generation (40%) and 37% of the second generation see their ethnicity as helpful in getting work, while 22% and 25%, respectively, say it hurts. About a third of each generation say that their ethnicity neither helps nor hurts in a job hunt. 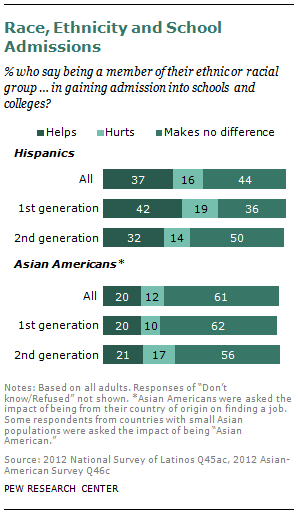 Admission to Schools and Colleges: First-generation Latinos are more likely than those in the second generation to say that being Latino helps them get into a school (42% versus 32%).

But by about two-to-one, both generations are more likely to see their ethnicity as a benefit than a barrier (42% versus 19% for the first generation, 32% versus 14% for the second). Roughly one-third of first-generation (36%) and half of second-generation Latinos say their ethnicity does not affect school and college admissions.

Do different generations of Latinos and Asian Americans have different goals in life? To answer that question, the surveys asked Hispanics and Asian Americans how important each of five aspects of life are to them.35 The five items tested were “being a good parent,” “having a successful marriage,” “owning your own home,” “being successful in a high-paying job or career” and “living a very religious life.” 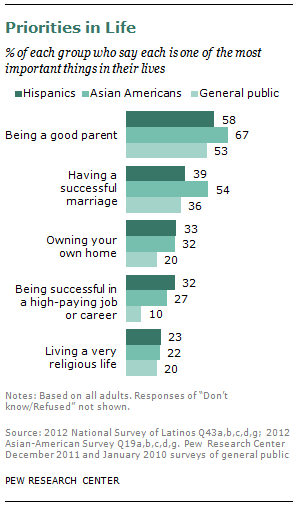 Latinos and Asian Americans both say being a good parent is their top priority (58% for Hispanics and 67% for Asian Americans), followed by having a successful marriage (39% and 54%, respectively). Smaller shares consider homeownership, career success and living a religious life as important goals.

Both Hispanics and Asian Americans generally place the values in roughly the same rank order. When compared to all adults, the pattern is the same, with one exception: The public places a higher value on “living a very religious life” than job success (20% versus 10%). In contrast, both Latinos and Asian Americans rank career success higher than religiosity.

In fact, no significant generational differences emerged among Hispanics on any of the five life goals tested in the survey.

Having a successful marriage. As a group, Asian Americans are significantly more likely than Hispanics to rate this as one of the most important goals in their life (54% versus 39%). Among Asian Americans, a larger share of the first generation than the second rate a good marriage as one of their top priorities in life (57% versus 48%). The pattern by generation among Latinos is less clear-cut and may even be reversed: 35% of foreign-born Hispanics but 42% of the second generation say that having a successful marriage is one of the most important things in their lives, though this difference falls just short of being statistically significant.

Owning your own home. Hispanics and Asian Americans equally value homeownership; fully 33% of Latinos and 32% of Asian Americans rate owning their own home as a top life goal. Among Latinos there are no generational differences between the first generation (32%) and the second (33%). However, Asian immigrants are significantly more likely than those in the second generation to value homeownership (34% versus 25%).

Being successful in a high-paying job or career. About a third of Latinos (32%) but a somewhat smaller share of Asian Americans (27%) say being successful in a well-paying job is one of their most important goals. About equal shares of first- and second-generation Latinos (33% and 35%, respectively) consider this a top priority. Among Asian Americans, a significantly larger share of the foreign born than the second generation value career success or a high-paying job as highly (29% versus 22%).

Three-quarters of Latinos (75%) and a slightly smaller majority of Asian Americans (69%) agree that most people can succeed “if they’re willing to work hard,” a belief that is as strongly held by those in the second generation of each group as it is in the first. In contrast, about six-in-ten (58%) of all Americans hold this belief, and 40% say hard work is not a guarantee of success.

According to the survey, first- and second-generation Latinos are equally likely to agree that “most people who want to get ahead can make it if they’re willing to work hard” (78% both groups).

First- and second-generation Asian Americans were also about equally likely to agree with this statement (68% and 72%, respectively, did so). 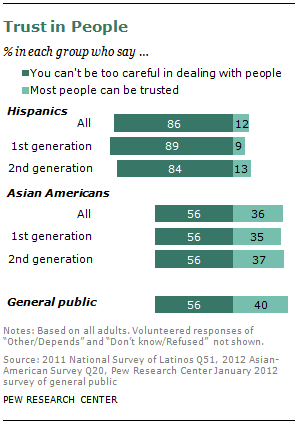 Majorities of Hispanics and Asian Americans believe “you can’t be too careful in dealing with people,” a view broadly shared by the two generations.

Hispanics as a group profess less trust in others than do Asian Americans (86% versus 56%) or Americans generally (56%).

About nine-in-ten foreign-born Latinos agree that “you can’t be too careful in dealing with people,” a sentiment shared by 84% of the second generation.

Identical proportions of first- and second-generation Asian Americans believe you can’t be too careful in dealing with others (56%).

Main Reason for Coming to U.S.

Immigrants give a variety of reasons for coming to the United States. Overall 56% of first-generation Hispanics say that economic opportunities are the main reason they immigrated. That is more than double the share that came for family reasons (23%), the second-most frequently cited motivation of the five offered. Smaller shares of Latinos say they came primarily for educational opportunities (9%), to escape conflicts or persecution in their home country (5%) or for some other reason (6%).

Among first-generation Asian Americans, about three-in-ten (31%) say they came to the U.S. for family reasons. About as many (28%) cite educational opportunities as the major factor, and about one-in-five (21%) say they immigrated to seek economic opportunities. In addition, 9% of Asian immigrants say they relocated to the U.S. to avoid conflict or persecution in their home country, and 9% give some other reason for coming here.

Regardless of the reason, roughly equal size majorities of Latino (79%) and Asian-American immigrants (76%) say that if they had to decide again whether to come to the United States, they would come again.