Relative to the general public, Asian Americans and, particularly, Hispanics tend to skew more Democratic than Republican in party identification and more liberal than conservative in ideology, according to an analysis of recent Pew Research Center surveys conducted with a nationally representative sample of Hispanics and a separate representative survey of Asian Americans. Second-generation and immigrant Asian Americans hold roughly the same partisan affiliations, though second-generation Hispanics are even more strongly Democratic-leaning than are immigrant Hispanics, however.

Other political orientations paint a complex portrait of the generations. Among Asian Americans, there are no differences in political ideology by generation, but the second generation is more inclined than the first generation to prefer a smaller government with fewer services over a larger, more activist government. Some of that difference may be explained by the younger average age of second-generation Asian Americans relative to Asian immigrants. 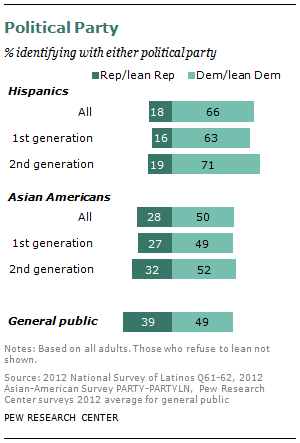 Both Hispanics and Asian Americans as a whole identify more with the Democratic than the Republican Party. Second-generation Hispanics follow this pattern even more strongly than do Hispanic immigrants. 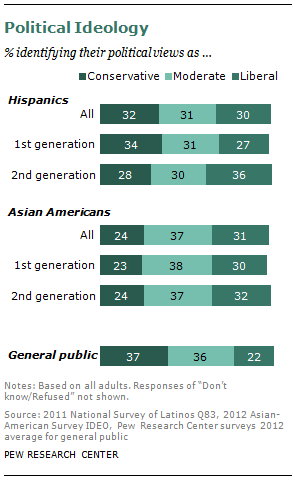 Among all U.S. Asians, 31% describe their political views as liberal, while 24% say they are conservative and 37% say they are moderate. There are no significant differences between first- and second-generation Asian Americans on political ideology. 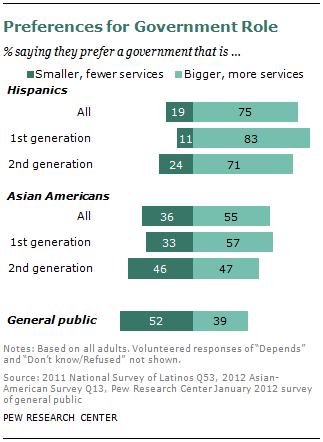 There are modest generational differences on views about the role of government, with second-generation Hispanics and Asian Americans less inclined than the immigrant generation toward an activist government. 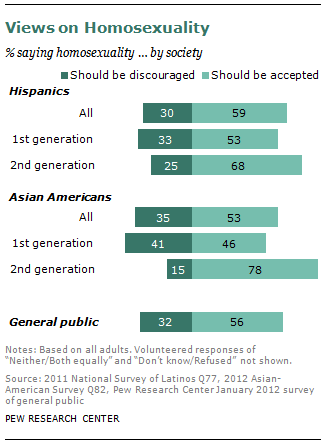 Differences by generation are evident when it comes to attitudes on social issues such as homosexuality and abortion. Second-generation Hispanics and Asian Americans are more accepting of homosexuality and legal abortion relative to the foreign born in each group. 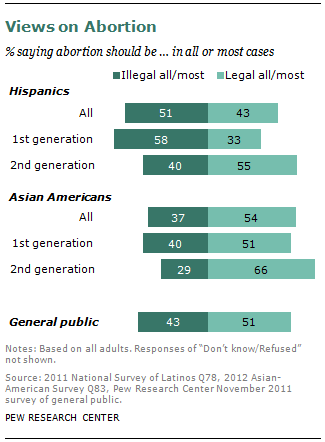 Similar generational differences are evident when it comes to views about abortion, with the second generation of each group holding more liberal positions on this issue.