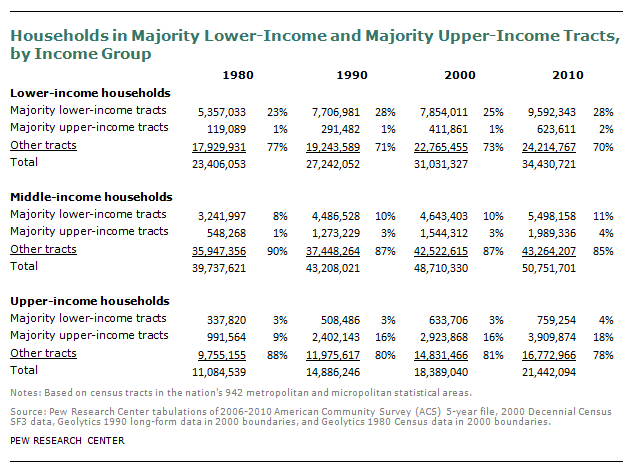 Comparisons with Racial and Ethnic Isolation

As for trends over time in racial segregation, one of the major findings arising from the 2010 Census is that black-white segregation continues to decline in America (Glaeser and Vigdor, 2012; Logan and Stults, 2011; Frey, 2011). In 1980, the typical black American lived in a census tract that was 58% black; by 2010, that share dropped to 45%.

However, residential segregation of Hispanic and Asian Americans may not have decreased—in part because the populations of these two minority groups have grown during this period, thereby creating larger pools for potential ethnic and racial clustering. In 1980, the typical Hispanic resided in a tract that was 38% Hispanic (compared with 45% in 2010) and the typical Asian or Pacific Islander resided in a tract that was 19% Asian or Pacific Islander (compared with 21% in 2010).7