Tract-level data on household income are available in the SF3 files of the decennial census and the 2006 to 2010 American Community Survey (ACS) five-year file. For 1990 and 1980, the Geolytics data products that normalize the long-form data into 2000 geographical boundaries were utilized. 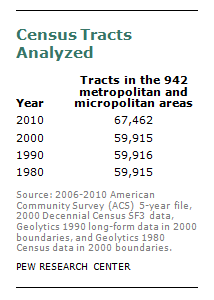 The methodology used is very similar to the widely noted study by Massey and Fischer (2003). They examined neighborhood change in 60 metropolitan areas, including the 50 largest in population.

Note that the Census Bureau tract-level household income data are available only in bracketed form—meaning that counts of households are shown within income ranges. For some parts of the income distribution the brackets can be fairly wide. For example, census data show that the total number of households with an income between $150,000 and $199,999 are located in a given census tract—but no finer detail than that.

To conduct a more precise analysis that allowed for estimates to be made on the basis of household income to the nearest $1,000 interval, the Pew Research Center applied a statistical technique known as osculatory interpolation. Our interpolation of the income data was achieved by applying a well-established formula known as the Sprague method. This formula reproduces the original data, meaning that the sum of the interpolated data always adds up to the published group data. See Siegel and Swanson (2008) for an explanation of the Sprague method.