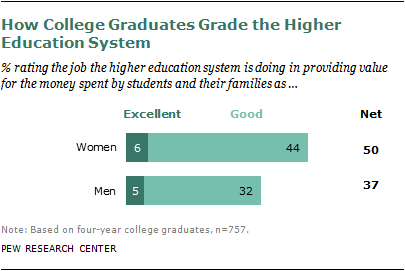 At a time when women surpass men by record numbers in college enrollment and completion, they also have a more positive view than men about the value higher education provides, according to a nationwide Pew Research Center survey. Half of all women who have graduated from a four-year college give the U.S. higher education system excellent or good marks for the value it provides given the money spent by students and their families; only 37% of male graduates agree. In addition, women who have graduated from college are more likely than men to say their education helped them to grow both personally and intellectually.

Also, while a majority of Americans believe that a college education is necessary in order to get ahead in life these days, the public is somewhat more inclined to see this credential as a necessity for a woman than for a man. Some 77% of respondents say this about women, while just 68% say it about men.1

This new survey of a nationally representative sample of 2,142 adults ages 18 and older was conducted at a time when women are outpacing men by significant numbers in college enrollment and completion. In 2010, a record 36% of women ages 25-29 had attained a bachelor’s degree. This compares with 28% of men in the same age group. Until roughly 1990, young men had outpaced young women in educational attainment. Women surpassed men in 1992, and since that time the gap has continued to widen.

There are also racial and ethnic patterns underlying these gender trends. Among young adults, whites are more likely than blacks or Hispanics to complete college. In 2010, 39% of whites ages 25-29 had at least a bachelor’s degree. That compares with 19% of blacks and 13% of Hispanics. Asian-Americans are more likely than any of these racial or ethnic groups to graduate from college—53% of those ages 25-29 had at least a bachelor’s degree in 2010.

Across all of these racial and ethnic groups, young women are more likely than young men to be college-educated. The gender difference in completion rates is reflected in the makeup of college graduates. Among all college graduates ages 25-29 in 2010, 55% were women and 45% were men. The gap was largest within the black community, where 63% of college-educated young adults were women and only 37% were men.

Data for this report come mainly from a Pew Research Center survey and Pew Research calculations of the educational data from the Current Population Surveys (CPS). The Pew Research survey was conducted by landline and cellular telephone March 15-29, 2011, among a nationally representative sample of 2,142 adults living in the continental United States.

This report is based on findings from a recent Pew Research Center survey as well as analyses of Current Population Survey (CPS) data on education trends.

The general public survey (GP) is based on telephone interviews conducted with a nationally representative sample of 2,142 adults ages 18 and older living in the continental United States, including an oversample of 336 adults ages 18-34. A total of 1,052 interviews were completed with respondents contacted by landline telephone and 1,090 with those contacted on their cellular phone. The data are weighted to produce a final sample that is representative of the general population of adults in the continental United States. Survey interviews were conducted under the direction of Princeton Survey Research Associates International in English and Spanish.

Unless otherwise noted, “college graduates” refers to those who graduated from a four-year college and hold a bachelor’s degree or higher.

Next: I. The Value, Usefulness and Cost of College
← Prev Page
You are reading page1Page2Page3Page4Page5Page6
Next Page →

Women See Value and Benefits of College; Men Lag on Both Fronts, Survey Finds
Executive SummaryOther Key Findings
I. The Value, Usefulness and Cost of College II. How Important Is a College Education? III. Public Reactions to Changing Gender Patterns IV. By the Numbers: Gender, Race and Education Appendix