Since the early 1990s, more young women than young men have been completing college. The survey attempted to gauge the public’s reaction to this educational trend. Respondents were asked whether the fact that women are now more likely than men to get a college degree is a good thing for society, a bad thing or if it doesn’t make much difference. Slightly over half of the public (52%) say this is a good thing for society, 39% say that it doesn’t make much difference, and only 7% view this as a bad thing. 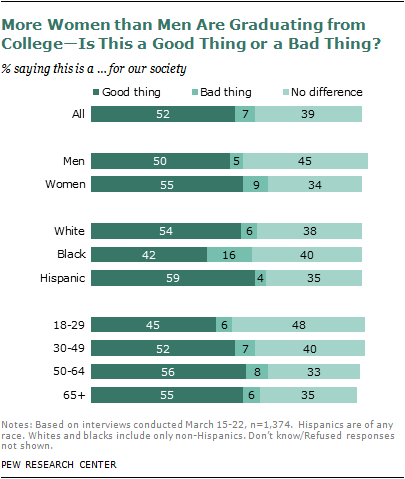 A similar share of men and women (50% and 55%, respectively) view the female advantage in college education as a good thing for society. Men are somewhat more likely than women to view this as neutral for society (45% vs. 34%), while women are nearly twice as likely as men to say it is a bad thing for society (9% vs. 5%).

Black Americans are less likely than others to say that the gender gap in college completion is a good thing for society. Only about four-in-ten blacks (42%) think the fact that more women than men are college-educated is a good thing, compared with more than half of whites (54%) and Hispanics (59%). Blacks (16%) are much more likely than whites (6%) or Hispanics (4%) to think that this is a bad thing.

Adults under age 30, the so-called Millennial Generation, are less likely than older Americans to think that the trend toward more women than men graduating from college is a good thing. Fewer than half (45%) of adults ages 18-29 view the trend positively, compared with 56% of those ages 50 and older. The Millennial Generation is also more likely than older adults to say that the trend does not make a difference for society. 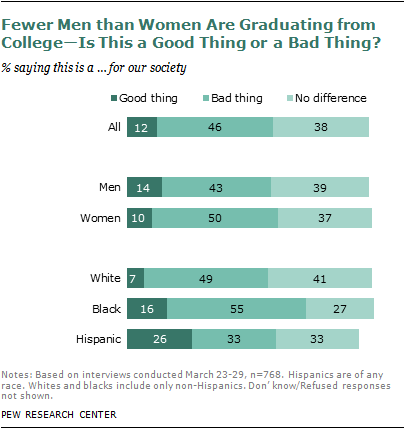 There is a flip side to this story, however. While the public likes the idea that more women than men are getting college degrees these days, when the issue is reframed to emphasize the fact that fewer men than women are completing college, the public reacts much more negatively. Some survey respondents were asked whether the fact that women are more likely than men to finish college is good or bad for society, while others were asked the following question: “As you may know, men are less likely than women these days to get a college degree. Overall, do you think this is a good thing for our society, a bad thing or doesn’t it make much difference?” Nearly half of the respondents (46%) said that this is a bad thing for society, only 12% said it is a good thing and the rest (38%) said it doesn’t make much difference.3

This disconnect may be related to the question wording and framing. Respondents may be more likely to see positive trends (i.e., women are more likely than men to get a college degree) as a good thing and negative trends (i.e., men are less likely than women to get a college degree) as a bad thing, despite the fact that the two questions have the same meaning.

Men and women generally hold similar views about these gender trends, regardless of how the question is phrased. Meanwhile, blacks (55%) and whites (49%) are more likely than Hispanics (33%) to say that the trend toward fewer men than women getting college degrees is a bad thing for society.

Next: IV. By the Numbers: Gender, Race and Education
← Prev Page
Page1Page2Page3You are reading page4Page5Page6
Next Page →

Women See Value and Benefits of College; Men Lag on Both Fronts, Survey Finds I. The Value, Usefulness and Cost of College II. How Important Is a College Education?
III. Public Reactions to Changing Gender Patterns
IV. By the Numbers: Gender, Race and Education Appendix