II. How Important Is a College Education? 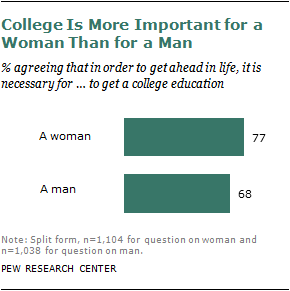 Those who live on the East Coast place a great deal of importance on women’s education. Among East Coast residents, nearly nine-in-ten (88%) think that college is necessary for a woman. This compares with 74% of adults in the rest of the country. When it comes to men’s education, there are no regional differences. Those who hold liberal political views are more likely than conservatives to agree that a college education is a necessity for a woman (82% vs.74%). Liberals and conservatives do not differ in their views on the importance of a college education for a man.