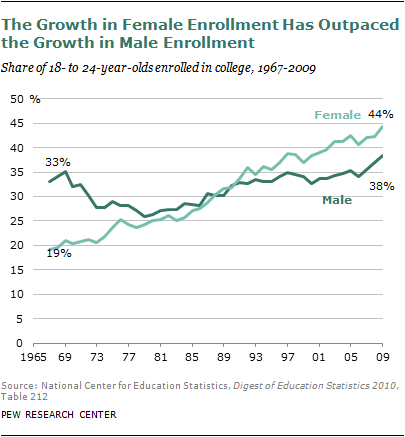 If you step foot on a college campus these days, you are likely to see more women than men strolling ’neath the elms. Among currently enrolled students ages 18-24, about 53% are women.4 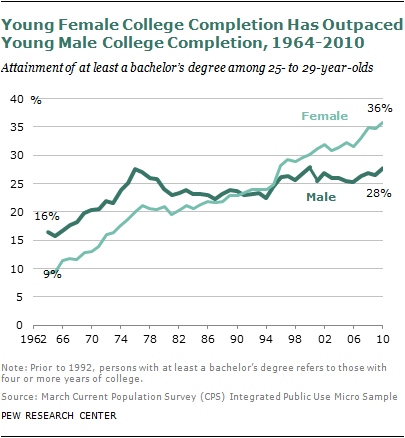 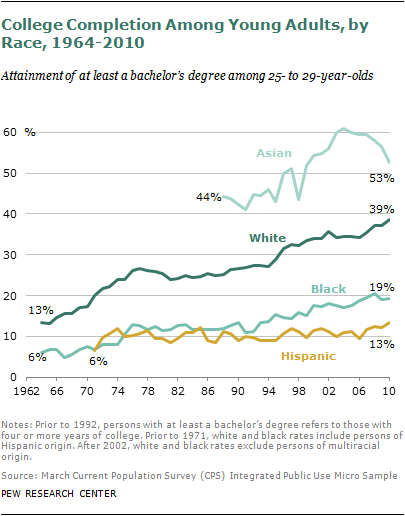 Young women are not only more likely to be enrolled in college, but are also more likely to graduate from college. In 2009, among women ages 25-29, 36% had at least a bachelor’s degree, compared with 28% of men in the same age range. The college completion gap between genders is even wider than the enrollment gap: 8 percentage points vs. 6 percentage points. 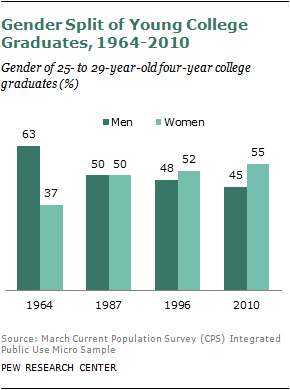 There are significant racial and ethnic differences in college attainment among those ages 25-29. Among the four major racial and ethnic groups, young Asians are the most likely to be college graduates. In 2010, more than half (53%) of Asians ages 25-29 had at least a bachelor’s degree. Young whites have the second-highest completion rate (39%), followed by young blacks (19%) and Hispanics (13%).

These racial and ethnic patterns have remained stable since 1988 (when data for all four groups first became available), despite the steadily growing share of college graduates within most groups.

The underrepresentation of black men in higher education is not a new phenomenon. In 1988, when the overall gender split was roughly even, there were more black females than black males among college graduates (53% vs. 47%). Today, the gap is much wider.

Women See Value and Benefits of College; Men Lag on Both Fronts, Survey Finds I. The Value, Usefulness and Cost of College II. How Important Is a College Education? III. Public Reactions to Changing Gender Patterns
IV. By the Numbers: Gender, Race and Education
Appendix