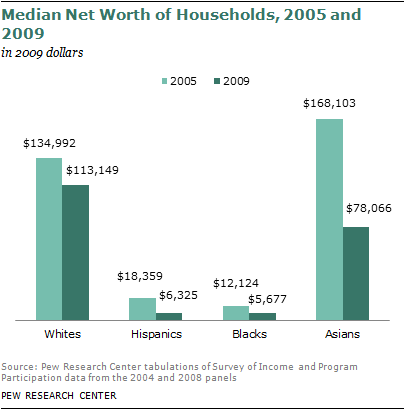 Adjusted for inflation,8 the median wealth, or net worth, of U.S. households fell from $96,894 in 2005 to $70,000 in 2009, a drop of 28%. The precipitous decline in wealth was not evenly distributed across groups. Minority households—Hispanics, blacks and Asians—experienced far steeper declines than white households.

Minority households experienced greater losses because they are more dependent on home equity as a source of wealth. As noted above, housing values started to fall sooner than stock prices and, unlike the stock market, the housing market has not begun to recover. Hispanics and Asians were further affected because they are disproportionately likely to reside in states that have been among the hardest hit by the housing crisis: California, Florida, Nevada and Arizona. Hispanics and blacks have also been more susceptible to home foreclosures and their homeownership rates have dropped more than for any other group.

Household Wealth by Race and Ethnicity

However, as discussed in greater detail in the appendix, the recorded decrease in the wealth of Asian households, more than three-quarters of which are headed by immigrants, is sensitive to the arrival of new immigrants between 2005 and 2009. The accumulation of assets takes time, and immigrants initially tend to have low levels of wealth.9 If the 2009 SIPP sample is adjusted to remove immigrants who arrived since 2004, the median wealth of Asian households in 2009 is estimated to be $116,555. That is a drop of 31% from 2005, nearly twice as much as for white households but still leaving Asian households with median wealth that is similar to that of whites.10

The Gap in Wealth between Whites, Hispanics and Blacks

The Role of Housing

An owned home is the most important asset in the portfolio of most households.12 Thus, the housing downturn that began in 2006 had a great impact on the net worth of a typical household.

The corrosive effect of the housing downturn was the deepest for Hispanics and blacks. Median net worth exclusive of home equity decreased only $479 for Hispanics and $626 for blacks. With housing included, their losses were $12,034 and $6,447, respectively. Similarly, white and Asian households would have experienced only a small fraction of their actual losses if not for the housing downturn.

Households with Zero or Negative Net Worth 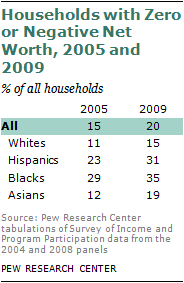 The increase in the share of households with zero or negative net worth from 2005 to 2009 was greatest among minority households. It increased from 23% to 31% for Hispanics, from 12% to 19% for Asians, and from 29% to 35% for blacks. The change was more modest for white households, with the share climbing from 11% to 15%. Thus, another gulf, the one separating those with some wealth from those without, has widened, to the disadvantage of minority households.

Next: Chapter 3: Net Worth by Type of Asset
← Prev Page
Page1Page2You are reading page3Page4Page5Page6Page7Page8Page9Page10
Next Page →

Race and EthnicityEconomics and Personal FinancesSocioeconomic ClassIncome InequalityHispanic Latino DemographicsAfrican AmericansWealth
Quiz: Are you a Core Conservative? A Solid Liberal? Or somewhere in between?
More Americans now say academic concerns should be a top factor in deciding to reopen K-12 schools
Defining generations: Where Millennials end and Generation Z begins
How the Coronavirus Outbreak Has – and Hasn’t – Changed the Way Americans Work
Views on Race in America