The net worth of a household depends on the types of assets it owns, the value of those assets and the claims on those assets. For example, the typical American household owns a home. The market price of that home determines its value but it may have a claim against it in the form of a mortgage loan. The difference between the value of the house and the amount owed on the mortgage—home equity—is the contribution of this asset to household net worth.

This section of the report presents estimates of the typical amount of equity held by households in different types of assets. Subsequent sections of the report focus on the rates of ownership of assets and the contributions of individual assets to household net worth.

The conclusion that emerges from the asset-based analysis is that developments in the housing market are the principal agents of change in household wealth from 2005 to 2009. A home is one of the most commonly owned assets, and home equity is the single largest contributor to household wealth. Thus, plummeting housing prices had a profound impact on the net worth of most households. The effect was more pronounced for minorities because, relative to whites, housing assumes a larger share of their portfolios. Also, Hispanics and Asians were deeply affected because their population is relatively more concentrated in California, Florida, Nevada and Arizona, which experienced among the greatest declines in home prices.

Asset ownership rates also edged downward from 2005 to 2009, but in small measure. The drop in asset ownership was generally modest in comparison with the fall in the net worth of assets. Overall, declining value, not declining ownership, is at the heart of the loss in household wealth.

Median Net Worth of Individual Assets 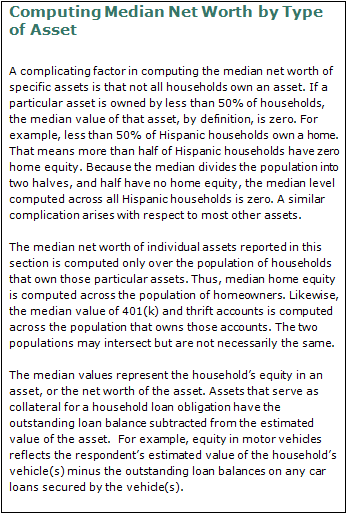 Real estate, for either personal use or rental purposes, is the most highly valued asset owned by households. Financial assets, in the form of stocks, mutual funds, bonds and retirement accounts are also a key part of the portfolio. Of these two major groups of assets, net worth eroded the most for real estate holdings. The value of financial assets moved in different ways, depending on the specific asset and subpopulation examined. 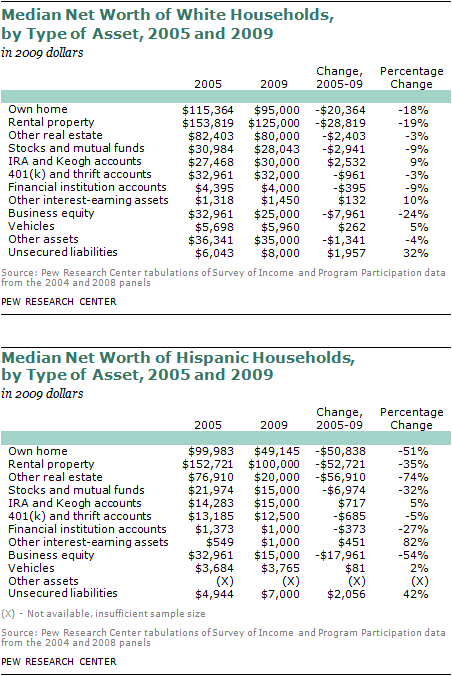 Retirement plans are also an important source of wealth accumulation for households. Black householders experienced significant losses in their pension savings. The value of IRA and Keogh accounts held by black householders fell from $17,319 in 2005 to $15,000 in 2009, a drop of 13%. Likewise, the value of their 401(k) and thrift accounts shrank from $15,382 to $11,000, a loss of 28%. 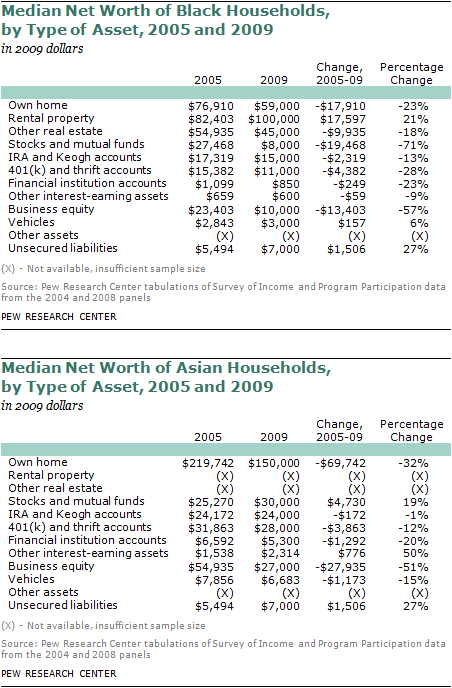 In light of the economic downturn, it is notable that business owners, regardless of race and ethnicity, reported large losses in the equity they hold in their businesses. The loss in business equity was highest among minority households, all losing about half the value they started with in 2005. For Hispanics, business equity fell