Chapter 5: Which Assets are Most Important?

The importance of an asset to household wealth depends on its prevalence and its value. For that reason, homeownership plays a central role for most households—it is a high value asset, and most U.S. households own their homes. The diversity of a portfolio also matters. Although Hispanics and blacks are less likely than whites and Asians to own homes, their wealth is relatively more dependent on home equity. That is because whites and Asians are much more likely to own financial assets and have more diverse portfolios.

The contribution of an individual asset to total net worth can be determined by examining the distribution of the mean level of wealth.15 For all groups, the largest single contributor to total net worth is an owned home. Further, home equity is much more vital to the wealth of Hispanic and black households. Thus, these two groups were more sensitive to the downturn in the housing market.

Hispanics. Nearly two-thirds (65%) of Hispanic household wealth in 2005 was derived from owned homes. No other asset accounted for more than 10% of total net worth in 2005. Given the large role played by housing, the decrease in real estate values from 2005 to 2009 had a large negative impact on the net worth of Hispanic households. Their mean wealth fell from $122,649 in 2005 to $73,026 in 2009, a loss of $49,623. Almost all of this loss is attributable to declining home equity levels. Another key factor was the increase in unsecured liabilities. These liabilities “took away” 5% from net worth in 2005, and the take-away rose to 13% in 2009.

Blacks. Black households drew 59% of their net worth from home equity in 2005. Only one other asset—401(k) and thrift accounts—contributed more than 10% at the time. Thus, like Hispanics, the bulk of the loss in mean wealth is accounted for by falling levels of home equity. The rise in unsecured liabilities, with the take-away increasing from 7% in 2005 to 12% in 2009, is another important factor underlying the loss in mean net worth.

Whites. Owned homes also are the largest single source of wealth for white households, but financial assets are relatively more important to their economic well-being. Stocks and mutual funds, IRA and Keogh accounts, and 401(k) and thrift accounts were responsible for 28% of the net worth of white households in 2005 compared with 19% for blacks and 15% for Hispanics. And although white households were also affected by the housing crisis, those losses had (proportionally) a lesser impact on their overall wealth. 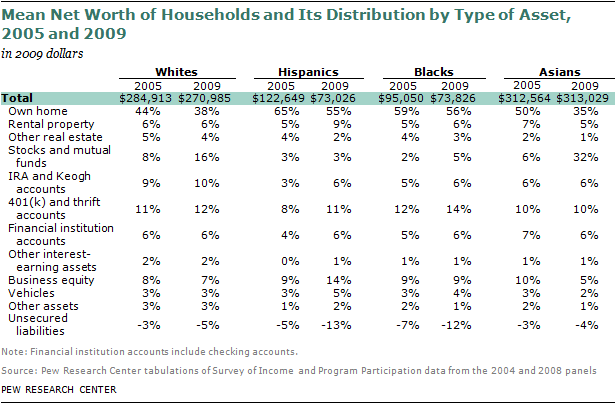 Next: Chapter 6: The Geography of the Housing Downturn
← Prev Page
Page1Page2Page3Page4Page5You are reading page6Page7Page8Page9Page10
Next Page →