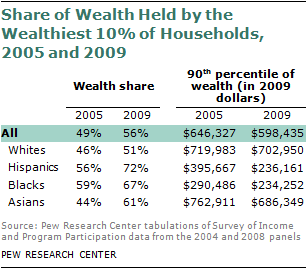 Just as the wealth gap between whites, Hispanics and blacks expanded in favor of whites during the time period under study, it also widened in favor of the wealthiest within each racial and ethnic group. The share of total wealth held by the top 10% of households in the wealth rankings increased from 2005 to 2009 within all groups.

This did not happen because the rich got richer. They did not: the inflation-adjusted threshold for entry into the wealthiest 10% decreased from 2005 to 2009 for all racial and ethnic groups. Even so, those in the top 10% of the wealth ladder were relatively less affected by the economic downturn than those in the remaining 90%, and this was the case for all groups. Also, as noted earlier, the share of households with zero or negative net worth increased among all groups.

Next: Appendix
← Prev Page
Page1Page2Page3Page4Page5Page6Page7Page8You are reading page9Page10
Next Page →