The most ubiquitous assets in American households are owned homes, motor vehicles and interest-earning assets at financial institutions (savings accounts, etc.). About half of all households also carry some form of unsecured liability. The combination of relatively high ownership rates and high levels of equity places an owned home at the center of most household portfolios.

Homeownership rates are highest for whites—unchanged at 74% from 2005 to 2009—and lowest for blacks—down slightly from 47% in 2005 to 46% in 2009. In between are Hispanics who experienced the greatest decline in the homeownership rate, from 51% to 2005 to 47% in 2009. Among Asian households, the homeownership rate fell from 60% in 2005 to 57% in 2009. A leading cause of the general decline in homeownership is the foreclosure crisis, which has had a greater impact on minorities.14 Hispanics and Asians are also more likely to live in areas most affected by the housing crisis, such as California, Florida, Nevada and Arizona. 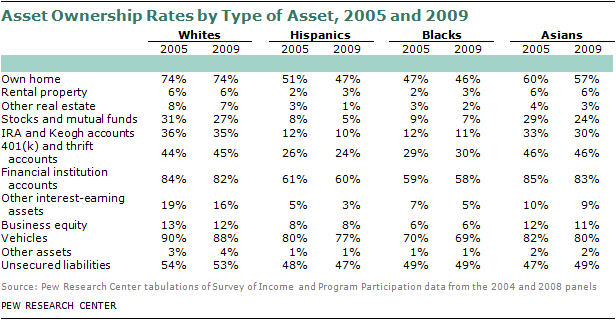 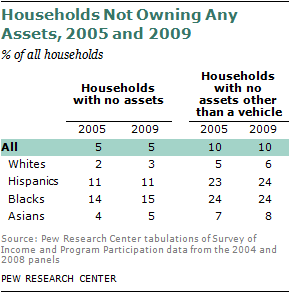 A sizable minority of U.S. households own no assets other than a motor vehicle. In 2009, that was true for 24% of black and Hispanic households, 8% of Asian households and 6% of white households. There is no increase of note in this share from 2005 to 2009.

Overall, asset ownership rates—real estate, financial or other—edged downward from 2005 to 2009, but in small measure. The drop in asset ownership is generally modest in comparison with the fall in the net worth of assets. Thus, declining value, not declining ownership, is at the heart of the loss in household wealth.

Next: Chapter 5: Which Assets are Most Important?
← Prev Page
Page1Page2Page3Page4You are reading page5Page6Page7Page8Page9Page10
Next Page →