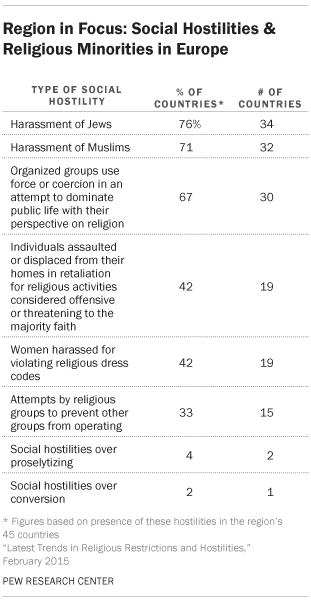 On an early January morning in 2013, Shehzad Luqman, a 27-year-old Pakistani Muslim living in Greece, was riding his bicycle to work in an Athens suburb when he was violently attacked. Two men suspected of being members of Greece’s neo-Nazi political party, Golden Dawn, were later convicted of stabbing Luqman to death.30

While this attack was particularly violent, it was not an isolated incident. Although Europe’s median score on the Social Hostilities Index declined slightly, from 2.7 in 2012 to 2.3 in 2013, it remained well above the global median (1.6), and many acts of hostility in the region were directed at religious minorities.

Harassment of Jews and Muslims was particularly widespread. Jews faced harassment in 34 of the region’s 45 countries (76%) — a higher share than in any other region. In the rest of the world, Jews were harassed by individuals or groups in society in 25% of countries.

In France, three men attacked a teenager who was wearing a kippah in Vitry-Sur-Seine in March, threatening, “We will kill all of you Jews.”31 In Spain, vandals painted a large swastika on the walls of a bull ring in the city of Pinto in August, along with the words “Hitler was right.”32 In the town of Komarno in southern Slovakia, metal tiles embedded in the pavement honoring a local Jewish family killed in the Holocaust were destroyed in October when vandals poured tar over them.33 And in Norway, the newspaper Dagbladet published a controversial cartoon in May that appeared to be mocking the practice of circumcision.34

Muslims experienced harassment in nearly as many European countries as Jews – 32 of the 45 countries, or 71%. By comparison, Muslims were harassed in 34% of the countries in the rest of the world.

In Germany, bloody pig heads were found at a site where the Ahmadiyya Muslim community planned to build Leipzig’s first mosque.35 In Ireland, several mosques and Muslim cultural centers received threatening letters. One of the letters stated, “Muslims have no right to be in Ireland. The Irish people are not happy with your presence in our country, which belongs to the true Irish people.”36

In about two-thirds of the countries in Europe, organized groups used force or coercion in an attempt to dominate public life with their perspective on religion. In many cases, organized groups that oppose the presence of minority religious groups in their country intimidated or attacked these religious communities. This type of social hostility was much more prevalent in Europe (30 of 45 countries, or 67%) than in the rest of the world (38%). In some cases, attempts to dominate public life with a particular perspective on religion included online intimidation of minority religious groups, including posting anti-Semitic and anti-Muslim rhetoric. In Italy, for example, four men were sent to jail in April after they published lists of Jewish residents and businesses on neo-Nazi websites.37 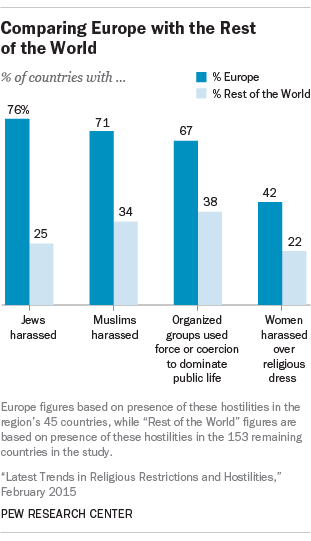 In four-in-ten countries in the region (42%), individuals were assaulted or displaced from their homes or places of worship in retaliation for religious activities considered offensive or threatening to the majority faith. In Poland, for example, arsonists set fire to the door of a mosque in Gdansk in October. Some accounts speculated that the attack was done in retaliation for the ritual slaughter of a lamb by the country’s chief mufti, Tomasz Miskiewicz, in violation of a Polish animal protection law that bans the practice of slaughtering animals without first stunning them.38

Women were harassed over religious dress in about four-in-ten countries in Europe (19 of 45, or 42%) – a higher percentage than in the rest of the world (22% of countries) and about the same share as in the Middle East-North Africa region (where it occurred in eight of 20 countries, or 40%). This measure of harassment includes cases in which women are harassed for wearing religious dress, as well as cases in which they are harassed for perceived violations of religious dress codes. In France, for example, two men attacked a pregnant Muslim woman in June, kicking her in the stomach and attempting to remove her headscarf and cut her hair; she reportedly suffered a miscarriage in the days following the attack, which occurred in the Parisian suburb of Argenteuil.39 In Italy, two Moroccan men attacked a young Moroccan woman in February, beating her for “offending Islam” when she refused to wear a headscarf.40

Religious groups attempted to prevent other groups from operating in a third of the countries in Europe (15 of 45 countries, or 33%). In Germany, religious leaders and church officials continued to issue warnings against groups labeled as “sects” or “cults” – including the Church of Scientology, the Unification Church, Transcendental Meditation and Universal Life practitioners.41 In Russia, activists and groups claiming to have ties to the Russian Orthodox Church disseminated publications casting minority religious groups in the country in a negative light.42