Worldwide, social hostilities involving religion declined somewhat in 2013 after reaching a six-year peak the previous year, but roughly a quarter of the world’s countries are still grappling with high levels of religious hostilities within their borders, according to the Pew Research Center’s latest annual study on global restrictions on religion.

The new study finds that the share of countries with high or very high levels of social hostilities involving religion dropped from 33% in 2012 to 27% in 2013, the most recent year for which data are available. These types of hostilities run the gamut from vandalism of religious property and desecration of sacred texts to violent assaults resulting in deaths and injuries.

By contrast, the share of countries with high or very high government restrictions on religion stayed roughly the same from 2012 to 2013. The share of countries in this category was 27% in 2013, compared with 29% in 2012. Government restrictions on religion include efforts to control religious groups and individuals in a variety of ways, ranging from registration requirements to discriminatory policies and outright bans on certain faiths.

Looking at the overall level of restrictions – whether resulting from government policies or from hostile acts by private individuals, organizations and social groups – the study finds that restrictions on religion were high or very high in 39% of countries. Because some of these countries (like China and India) are very populous, about 5.5 billion people (77% of the world’s population) were living in countries with a high or very high overall level of restrictions on religion in 2013, up from 76% in 2012 and 68% as of 2007.

As in previous years, Christians and Muslims – who together make up more than half of the global population – faced harassment in the largest number of countries. Christians were harassed, either by government or social groups, in 102 of the 198 countries included in the study (52%), while Muslims were harassed in 99 countries (50%). 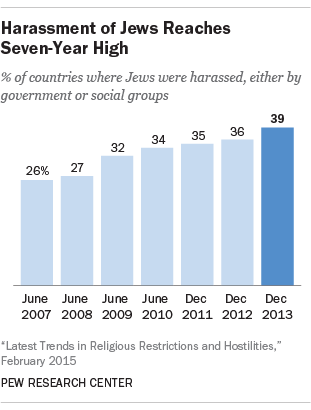 In recent years, there has been a marked increase in the number of countries where Jews were harassed. In 2013, harassment of Jews, either by government or social groups, was found in 77 countries (39%) – a seven-year high. Jews are much more likely to be harassed by individuals or groups in society than by governments. In Europe, for example, Jews were harassed by individuals or social groups in 34 of the region’s 45 countries (76%). (See sidebar on social hostilities and religious minorities in Europe.)

This is the sixth in a series of annual reports by the Pew Research Center analyzing the extent to which governments and societies around the world impinge on religious beliefs and practices. The studies are part of the Pew-Templeton Global Religious Futures project, which analyzes religious change and its impact on societies around the world. The project is jointly funded by The Pew Charitable Trusts and the John Templeton Foundation.

To measure global restrictions on religion in 2013, the new study scores 198 countries and territories on the same 10-point indexes used in the previous studies.

• The Government Restrictions Index measures government laws, policies and actions that restrict religious beliefs and practices. The GRI is comprised of 20 measures of restrictions, including efforts by government to ban particular faiths, prohibit conversion, limit preaching or give preferential treatment to one or more religious groups.

• The Social Hostilities Index measures acts of religious hostility by private individuals, organizations or groups in society. This includes religion-related armed conflict or terrorism, mob or sectarian violence, harassment over attire for religious reasons or other religion-related intimidation or abuse. The SHI includes 13 measures of social hostilities.1

The Pew Research Center identified three measures on the Government Restrictions Index and three on the Social Hostilities Index that target groups out of favor with the government or society, which tend to be religious minorities. (The analysis focused on whether or not these restrictions and hostilities were in place, not on how many members of religious minorities were affected by them. For more details on the selection of the measures, click here.)

On the government side, these restrictions include prohibitions or bans on specific faiths; attempts to control or intimidate religious groups through the use of force; and efforts to eliminate a group’s presence from the country or a particular area. As of 2013, nearly a third of the countries in the world (59 countries, or 30%) had at least one of these restrictions.

The study also identified three measures on the Social Hostilities Index that tend to target religious minorities. In 2013, 120 countries (about 61%) experienced at least one of these hostilities, which include attempts to impose a particular perspective on religion on the rest of society; attempts by some religious groups to prevent other religious groups from operating; and assaults or other acts of hostility directed at individuals or groups seen as threatening to the majority faith.

In theory, a country might restrict a particular minority group but generally respect the religious rights of others living in the country. In reality, the new Pew Research study finds, countries with restrictions or hostilities aimed primarily at a religious minority are more likely than the rest of the world to have widespread restrictions and hostilities beyond those that tend to target religious minorities.

These are among the key findings of the Pew Research Center’s latest report on global restrictions on religion, which ranks 198 countries and territories by their levels of government restrictions on religion and social hostilities involving religion. The initial report, published in 2009, established a baseline for each country and five major geographic regions. Four follow-up reports looked at changes in the level of restrictions and hostilities in these countries and regions. The new report focuses on countries that had very high restrictions and hostilities in 2013, as well as countries that had large changes in their scores on Government Restrictions Index or Social Hostilities Index from 2012 to 2013. Where appropriate, it also compares the situation in 2013 with the situation in the baseline year of the study.

Readers should note that the categories of very high, high, moderate and low restrictions or hostilities are relative – not absolute – rankings based on the overall distribution of index scores in the initial year of this study. (See Methodology for more details.) As such, they provide a guide for comparing country scores and evaluating their direction over time. However, the Pew Research Center has not attached numerical rankings to the countries because there are many tie scores and the differences between the scores of countries that are close to each other are not necessarily as meaningful as they might appear.

As was the case in the previous restrictions reports, North Korea is not included in this study. The primary sources used in the study indicate that North Korea’s government is among the most repressive in the world, including toward religion. But because independent observers lack regular access to the country, the sources are unable to provide the kind of specific, timely information that formed the basis of this analysis.

Next: Situation as of 2013
← Prev Page
You are reading page1Page2Page3Page4Page5Page6
Next Page →