Countries With the Most Extensive Government Restrictions on Religion

Most countries in the world have some form of government restrictions on religion, but each year a few countries stand out as having particularly extensive restrictions.

Countries With the Most Extensive Religious Hostilities

As is the case with government restrictions, some countries stand out for having very extensive social hostilities involving religion.

Changes in Government Restrictions on Religion 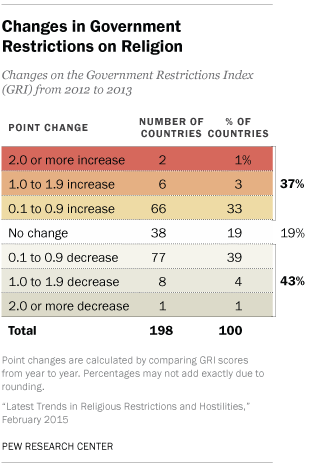 Just three countries had large changes (2.0 points or more) in their scores on the 10-point Government Restrictions Index between 2012 and 2013. Two countries – Burundi and South Sudan – moved in the direction of higher restrictions and one country (Somalia) moved in direction of lower restrictions.5 (As of 2013, South Sudan and Somalia had moderate levels of government restrictions, while Burundi was at the high end of the “low restrictions” category.) In Burundi, there were frequent clashes between government forces and members of an informal religious group over access to a shrine to the Virgin Mary in the Kayanza region, located in the northern part of the country. Members of the group identify themselves as Catholics, but they are not accepted by the Catholic Church because some members claim they can communicate directly with the Virgin Mary.6 In March 2013, 10 pilgrims to the shrine were killed and 35 were injured when police opened fire on them, reportedly after being hit by stones thrown by the worshippers. Nearly 200 visitors to the shrine received jail sentences after being convicted of civil disobedience. While most were released within a few days, 15 received jail terms of five years each.7

Among the 14 countries with modest changes in their GRI scores (1.0 to 1.9 points), six had increases, including Singapore and Turkey.8 In Singapore, the government maintained its decades-long ban on Jehovah’s Witnesses and the Unification Church and reportedly restricted the actions of members of several other religious groups, including adherents of the Falun Gong spiritual movement.9 In Turkey, some evangelical Protestants and Mormons reported that they experienced government surveillance and police interference as a result of their proselytizing activities.10 The United Kingdom was one of eight countries (4%) with modest decreases in their GRI scores in 2013 (declines of 1.0 to 1.9 points).11 Among the reasons were fewer restrictions on those practicing Scientology. Under a 1970 Court of Appeal ruling, Scientology did not qualify as an officially recognized “place of meeting for religious worship” in the U.K., which meant, among other things, that weddings performed in Scientology chapels could not be officially registered. This policy was overturned in 2013, when the Supreme Court of the United Kingdom ruled that Scientology should be regarded as a religion and that the Registrar General of Births, Deaths and Marriages should therefore recognize weddings that take place in Scientology chapels.12

Among countries with small changes on the Government Restrictions Index (less than one point), 66 (33%) had increases and 77 (39%) had decreases. 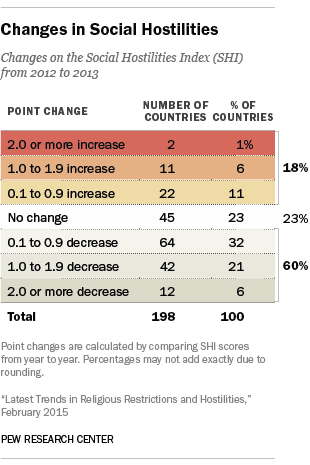 Some countries may experience significant changes in their scores on the Social Hostilities Index irrespective of whether they have “very high” levels of social hostilities. This section looks at the extent and direction of those changes from 2012 to 2013.

Among the 14 countries with large changes (2.o points or more) in their scores on the 10-point Social Hostilities Index between 2012 and 2013, two had increases and 12 had decreases.13 The two countries with large increases were the Central African Republic and Niger. In the Central African Republic, which had a very high level of social hostilities as of 2013, sectarian violence between Muslim rebels and Christian vigilante groups resulted in the deaths of hundreds of people and led to the displacement of hundreds of thousands of civilians.14 In Niger, which had a high level of hostilities, villagers in the Tahoua region attacked members of an Islamic association in May 2013, killing one person and injuring more than a dozen others.15

Ivory Coast was one of the 12 countries where social hostilities decreased by two points or more in 2013. Religion-related violence in the country, which had spiked after presidential elections in 2010, continued to subside in 2013.16 Muslim and Christian clerics issued joint statements promoting national reconciliation and religious tolerance and organized a number of interfaith events, including “days of prayer” intended to promote national unity.17

Considering changes of one point or more in social hostilities from 2012 to 2013, 7% of countries had increases and 27% had decreases.

Changes in Overall Restrictions on Religion

In addition to analyzing government restrictions and social hostilities separately, the Pew Research Center also considers government restrictions and social hostilities together. This provides insight into the overall extent of religious restrictions in a country. Looking at changes in overall restrictions, more countries experienced decreases than increases between 2012 and 2013. Among the 13 countries whose scores changed by 2.0 points or more on either of the indexes, two had increases and 11 had decreases. And among countries whose scores changed by 1.0 to 1.9 points, 10 had increases and 37 had decreases. 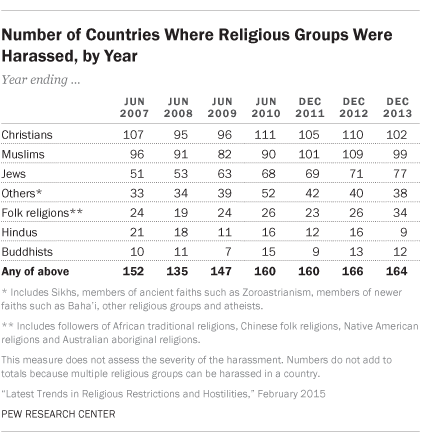 Harassment or intimidation of specific religious groups occurred in 164 countries in 2013, roughly the same as in 2012 (166). The world’s two largest religious groups, Christians and Muslims, continued to be harassed in the most countries, and there was a notable increase in the number of countries in which Jews and adherents of folk religions were harassed.

Harassment of specific religious groups takes many forms, including physical assaults; arrest and detentions; desecration of holy sites; and discrimination against religious groups in employment, education and housing. Harassment and intimidation also include things such as verbal assaults on members of one religious group by other groups or individuals. 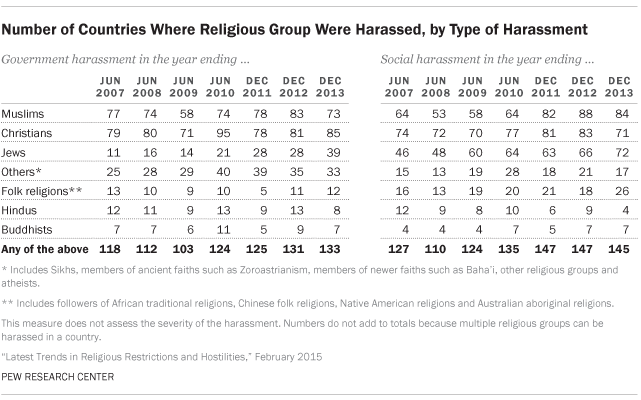 Next: Impact of Restrictions and Hostilities on Religious Minorities
← Prev Page
Page1You are reading page2Page3Page4Page5Page6
Next Page →